« STC Poll #2 - Vote for the technique that you think has most influenced your field | Main | Pictures Considered #23 : What Grains Tell... »

What do your laundry detergent and hydrocarbon-degrading marine bacteria have in common? Not much, besides surfactants. These substances lower the surface tension between substrates, targeting hydrophobic molecules like the stain on your favorite shirt or crude petroleum slicks in the Gulf of Mexico. In doing so, they serve as detergents, emulsifiers, and dispersants. Hydrocarbon-Degrading Marine Bacteria (HDMB) synthesize biosurfactants that emulsify crude petroleum constituents by capturing them within amphiphilic domains, allowing the organisms to use hydrophobic carbon substrates as a prime source of nutrition. However, biosurfactants may do more for HDMBs than provide a tasty, carbon-rich snack. They can also sequester hydrophobic compounds involved in bacterial communication, as reported in the paper discussed here.

One of the most exciting new areas of microbiology is, in fact, how bacteria, both of the same and different species, communicate with one another. The idea that bacteria just swim around as mute single cells with little regard for their neighbors is fast receding. Chief among the devices used for talking to each other is quorum sensing, a way microbial cells can "count" the number of other cells in their surroundings to regulate the expression of genes involved in such activities as bioluminescence, toxin production, or biofilm formation. But like combatants who may give away their position by using a radio, their presence can be perceived by others who are keen on disrupting such communication. This is a common phenomenon, and many are the ways in which quorum sensing molecules can be tampered with, including inhibiting their synthesis, inactivating them, or preventing their recognition. For an extensive review on this topic, see here. To this list we can now add another mechanism, the sequestration of quorum sensing molecules by encasing them in hydrophobic biosurfactant micelles. 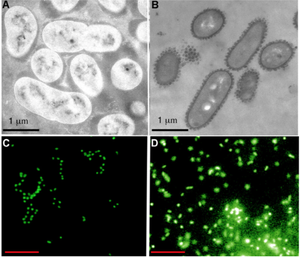 Last year, a group of researchers in Chile isolated and described a novel strain of HDMB that produces biosurfactants in response to both abiotic stimuli (a specific hydrocarbon) and biotic stimuli (a microbial competitor). Ibacache-Quiroga and colleagues obtained cultures of a bacterium called Cobetia sp. using the sulfur-rich hydrocarbon dibenzothiophene, or DBT, as the sole source of carbon and energy (this bacterium used to be an Arthrobacter, then a Halomonas). The researchers confirmed this organism's ability to carry out hydrocarbon metabolism by amplifying the gene that encodes a monooxygenase enzyme (DszA) involved in DBT degradation, or "biodesulfurization." This enzyme produces the hydrotrope, 2-hydroxylbiphenyl, a potential intermediate in biosurfactant production.

When exposed to DBT, cultures of this novel Cobetia strain significantly lowered the surface tension of growth medium. Compounds extracted from the culture supernatant easily emulsified hexadecane (a hydrophobic, long-chain alkane), suggesting the production of biosurfactants. Transmission electron microscopy (TEM) images show that Cobetia grown in DBT had different outer cell structures than those grown on an alternative growth medium (succinate), the DBT-grown bacteria forming globules of diffusible, surfactant-like lipid structures on the cell surface, indicating that some of the surfactant remained cell-bound. 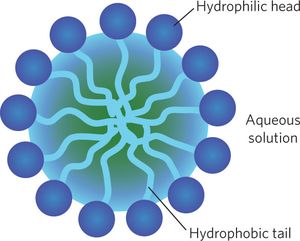 Figure 2. Biosurfactants shield their hydrophobic tails forming spherical micelles. The hydrophobic sections of the surfactant are close to each other and the hydrophilic head groups face outwards into the solution. These micelles capture hydrophobic molecules such as DBT (used for nutrition) and microbial signaling molecules (acyl-HSLs), which interfere with quorum sensing. Source

The surfactant in both the supernatant and the outer cell layer was composed primarily of aliphatic carbon chains or mixtures of 3-hydroxy fatty acids. This caught the researchers' attention because fatty acids are also known to act as diffusible signaling molecules between microbial species. Interspecies communication by chemical (lipid-like) signals participates in a plethora of interactions, from cooperative mutualisms to predation. Thus, the authors took a closer look at the impacts of these biosurfactants on quorum sensing. Sure enough, biosurfactant production was stimulated when Cobetia was presented with the potential microbial competitors Aeromonas salmonicida, Chromobacterium violaceum, or Agrobacterium tumefaciens. However, they have yet to identify what initiates the biosurfactant production in Cobetia, and speculate that synthesis may be stimulated by exposure to nonspecific diffusible lipid-like substances.

Could surfactant production be used as a secret weapon against competitors, lending Cobetia cells a return on their energy investment? Indeed, results suggested that biosurfactant production gives these cells an advantage by interfering with the signaling mechanisms of other species, sabotaging their developmental and associative behaviors. Signal interception occurs when fatty acid monomers of surfactant spontaneously cluster to form micelles that solubilize the lipophilic signaling molecules. And thus short out cell-to-cell communication circuits. Adding purified biosurfactant inhibited quorum sensing in the purple bacterium, C. violaceum. This bacterium uses quorum sensing to trigger the synthesis of violacein, an antibiotic that doubles as the purple pigment. When the Cobetia biosurfactant was added, the cells did not become purple, because the chemical signals to trigger violacein synthesis were hijacked by the Cobetia's micelles. 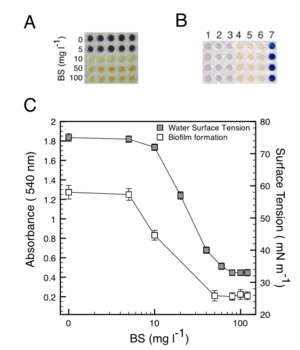 The quorum sensing signals that elicit violacein production are acyl-homoserine lactones (acyl-HSL), which are also produced by the fish pathogen A. salmonicida. The investigators found that combining A. salmonicida (which produces the acyl-HSL signal for pigment production) and a mutated strain of the pigment producing C. violaceum that could not make its own acyl-HSLs, generated purple cultures. Adding surfactants from Cobetia inhibited pigmentation synthesis in C. violaceum — no purple phenotype was seen. Thus, the biosurfactant produced by Cobetia altered a competitor's phenotype by modulating its chemical signaling pathways.

In order to test the limits of Cobetia's biological interference, the authors added the surfactant to cultures of the salmon pathogen, V. anguillarum. Whereas Cobetia's biosurfactant didn't impair growth of V. anguillarum, it disabled its ability to organize into biofilms. So, does Cobetia modify the pathogenic behavior of A. salmonicida? When they measured the activity of quorum sensing-dependent virulence genes (glycerophospholipid cholesterol acyltransferase GCAT and aerolysin), they found that transcription in both loci came to a screeching halt when A. salmonicida were grown in the presence of purified biosurfactant. By culturing Cobetia and A. salmonicida together, Cobetia effectively sabotages the communication system of A. salmonicida, securing a competitive advantage and rendering A. salmonicida non-pathogenic.

Biosurfactant production in the presence of both abiotic and biotic stimuli is important to both nutrient assimilation and neutralizing competitors. Fatty acid surfactants act as diffusible messengers, capable of interfering with biofilm production and the expression of virulence genes. This modulation of quorum sensing between microbes may be a promising approach to pathogen management. By hijacking chemical signals between pathogens, it may be possible to suppress virulence and quell organized attacks on the host organism, sidestepping many of the difficulties associated with antibiotic resistance. Thus, it helps to know what language these organisms speak, in order to learn about their cell-to-cell conversations.

Kalia Bistolas was a member of a microbiology class taught by Shana Goffredi at Occidental College where students write a blog piece patterned on Small Things Considered. She is currently a graduate student at Cornell.