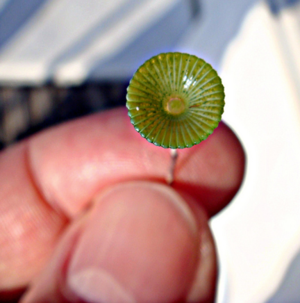 If I asked you what was the experimental basis for the central dogma of biology (DNA makes RNA makes Protein), you would be likely to mention the classical findings that the transforming principle was DNA (Avery et al.) or that phages transfer DNA to the host (Hershey & Chase). However, it is unlikely that you even have heard that the precept was earlier derived from studies with a unicellular marine alga, Acetabularia. If so, you would miss the remarkable biology that made it possible to carry out this work. Here is why: Acetabularia is such a large cell that it can be readily handled with one's hands.  It can be amputated into pieces that can be grafted together and its nucleus transplanted as easily as walking in the park.

Most cells are clearly too small for such luxuries. To enjoy them, we must turn to the outliers in range of sizes, that is, to giant cells. So, how big can cells get? The champion seems to be another a marine alga, Caulerpa, which can reach 3 meters in length. It is multinucleated, which seems almost like cheating (consider acellular slime molds, which can also reach enormous sizes, and other coenocytic organisms). Incidentally, Caulerpas are edible and are called sea grapes in Okinawa (海葡萄 or umi-budō). Also multinucleated are the xenophyophores, foraminifera-like protists that live in the ocean at depths below 500 meters and reach 15 cm across (and which were mentioned here earlier). Among the largest uninucleated single cells are the foraminifera called Nummulites, which can reach 5 cm in diameter, and a marine ameba called Gromia spherica. But the giant-celled algae, including Acetabularia, are high on this list. Of course, birds' eggs are even larger and they are unicellular and uninucleated all right, but their contents are more suitable for an omelet than for experimental manipulations. 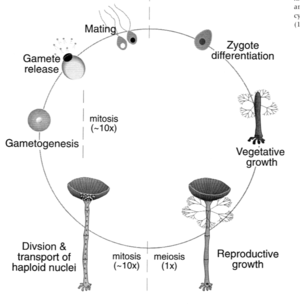 But first, what are Acetabularias? They are umbrella-like green algae called — probably by some Victorian era naturalist — "mermaid's wine glasses" that are found in subtropical seas. They will remind you of the leaves of nasturtium, should you remember what these look like (entirely round leaves atop central stems). Acetabularias can reach an astounding 3 − 6 cm in height and consist of a slender stalk that is usually attached to a rock surface by a rhizoid and which ends in a lobate umbrella-like cap. A large nucleus (50 − 120 μm in diameter) is located at the rhizoid. This nucleus divides repeatedly as the alga matures and the daughter nuclei are carried upward by cytoplasmic streaming to end up in each of the lobes of the cap.

What Made Them Famous? Acetabularias were used in the early days of cell biology for some amazing experiments on nuclear transplantation and cellular development. About 75 years ago, Joachim Hämmerling discovered that he could cut the organism in half with impunity and that each half would regrow the alga. He also found that if he cut it again, the specimen that had come from the top half would wither away and not regenerate further, whereas the one from the bottom half did regrow even after many such surgeries. Is the reason that the bottom part has the nucleus? He answered the question by a direct experiment, based on the ability of the cut upper pieces to be grafted onto lower pieces with the nucleus. The grafts took and a new plant regenerated, cap and all. The two species Hämmerling chose differed in their cap morphology, one, A. crenulata, having a wavy-edged or crenulated cap, the other, A. mediterranea (now called A. acetabulum), a smooth one. The defining observation was that the regenerated plant had the morphological characteristic of the bottom part, which was the first conclusive demonstration that the nucleus controls development. To confirm this, he transplanted nuclei of one species into another and got a hybrid with characteristics of both species. Hämmerling's experiment was the forerunner of all subsequent nuclear transplantations, which started some 20 years later with John Gurdon's experiment showing that a mature frog could be produced by transplanting a nucleus from an intestinal epithelial cell into an enucleated egg. For a video of Hämmerling's experiment, see here.

Figure 3. The cap of A.acetabulum (top left) is a smooth disc, that of A. crenulata (top right) is branched. Hämmerling grafted the stalk of one species onto the foot of another. The cap that eventually developed on the grafted cell matched the species of the foot rather than that of the stalk. In this example, the cap that growing on the grafted stalk looks like the base species one, A. acetabulum Source

Hämmerling discovered another surprising fact: the anucleated top portions of the cut stalk could not only regenerate the caps (albeit, as mentioned already, only once), but those pieces farthest removed from the nucleus regenerated the best caps. This suggested that the stalk contained substances involved in cap morphogenesis that were distributed along a gradient, the lowest concentration being at the basal end near the nucleus and increasing toward the top of the stalk. He also found that such substances were involved in the formation of all the parts of the organism, including whorls of hairs towards the top of the stalk and the rhizoid. In later experiments involving interspecific grafts, Hämmerling and colleagues showed that the nucleus is the source of these morphogenetic substances.

How Did Acetabularias Unravel the Central Dogma? In his days, Hämmerling could not guess the morphogenetic substances were messenger RNA (which was not described until 1961) but he soon declared that they "carried genetic information from the nucleus to the cytoplasm." He thus anticipated the discovery of mRNA by some 30 years. In time, he and several other investigators established that these substances were indeed mRNAs. Later on, Jean Brachet and colleagues in Bruxelles studied RNA and protein synthesis in nucleated and anucleated Acetabularia and showed that RNA flows from the nucleus to the cytoplasm where proteins are synthesized and ultimately account for the differentiation of umbrellas. (In the 1950's, Brachet's lab was one of the European meccas for Americans to do a postdoc).

What is the current status of Acetabularia research? Work with this model organism has been helped greatly by manipulations that shorten its life cycle. The life cycle used to take some six months in the lab and one to two years in the wild. A series of improvements in the medium and the use of axenic zygotes plus other tricks shortened the life cycle to about 97 days, a big jump, considering. This is not E. coli, but going from zygote to zygote in that time is not bad compared with "higher" plants and animals.

Although its aficionados may well argue that Acetabularia has not received its proper share of attention of late, considerable work has been carried out with it in recent times. For a review, see here. As you would expect, its giant size opened the door to studying details of how its constituents are distributed along its various regions. For example, it has been shown that specific mRNAs are distributed along the stalk and that they fall into four classes of localization: throughout the organism, at the base, at the apex of the stalk, and in locations that change during development. These molecules are likely transported via actin microfilaments of the cytoskeleton that span the whole cell. The Acetabularias' cytoskeleton consists of parallel bundles of actin that run axially and are involved in forceful cytoplasmic streaming. Also well studied is the behavior of the various classes of mRNAs involved in the synthesis of structural and regulatory proteins. It is noteworthy that some, notably the mRNAs for tubulin, are made and stored long before being used. How is this done? Good question. 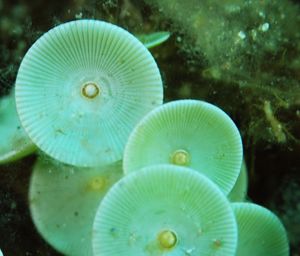 Much information has become available regarding cytoskeletal and endomembrane dynamics, electrophysiological elements affecting ion fluxes, and synthesis and mechanical properties of the cell wall. Like elsewhere, signal transduction and hormonal control are involved in regulatory pathways. In addition, the effects of environmental factors including light and gravity have been studied extensively and found to be involved in regulation of morphogenesis.

Open for more work with this organism are such fundamental questions of developmental biology as how structure and function operate at localized regions and how they are established and maintained. In the words of D. F. Mandoli, one of the principal present day investigators of this organism: "..., to me, the special appeal of A. acetabulum lies not just in the ability to address important questions in developmental and structural biology in the context of a physically large and architecturally complex unicell, but in being able to do so with access to a diverse and robust toolkit because this means that if one avenue of attack does not work, another probably will."