To many, microbiology is largely perceived as a profession predominantly practiced in the lab. However, during a trip to deliver humanitarian aid in Syria, I saw firsthand the crucial role microbiology can play in first response humanitarian aid, and why it should be a factor considered in providing aid to areas with people living under poor conditions.

Failing to take microbes into consideration following a crisis can lead to hugely negative outcomes. After the earthquake in Haiti, microbial infection became more dangerous than the natural disaster itself. A cholera epidemic broke out, resulting in 8,540 deaths and infecting 664,282 people. In 2012, following hurricane Sandy, there were approximately 2,300 hospitalizations per week in Haiti, many of which were due to microbial infections. Yet, despite such lessons, microbial control does not necessarily rise to prominence in crisis management.

In March 2013, I traveled to Syria to deliver humanitarian aid to refugees of the conflict in that country. During my time there, I stayed in a refugee camp living under the same conditions as the refugees. Due to lack of space, resources, and appropriate planning, people were living very close to one another, often 10 people in one tent. Waste water was constantly flowing out of each tent down the hillside and sometimes into the tents downhill. The water supply consisted of a large container that was refilled by a tanker truck from an unknown — and likely unreliable — source. Families were allotted 20 liters per day, to be used for everything, from hygiene to cooking to drinking. 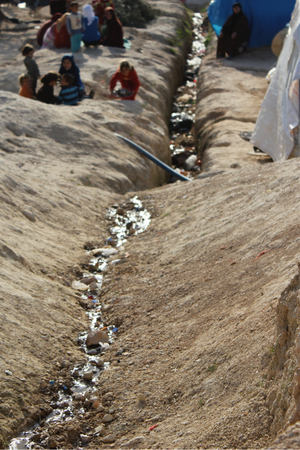 This photo was taken in the “Qah” refugee camp. In order to manage water flowing from tents, canals were made. However, as can be seen in the photo, they are blocked due to trash. Source: Shiyam Galyon

More and more refugees poured into the camp each day, often with nothing but the clothes on their back. But none were given hygiene products or taught to take necessary precautions to avoid becoming infected by pathogens. Typically, problems in crisis zones preclude attention to good sanitation and disease prevention. In Syria, there were insufficient and inadequate resources to feed or provide water for the refugees. There was no heating during the frigid winters or ventilation during the brutally hot summers. Physicians had many more sick patients than they had supplies. They often resorted to such desperate measures as to to sanitize and reuse old gauze. The destruction of the country's infrastructure had resulted in a lack of hospitals, testing facilities, water treatment plants, and garbage pickup.

The constant influx of refugees and improperly planned camps, in addition to the aforementioned conditions, created a suitable environment for the development of diseases spread by fecal-oral droplet transmission. This is well illustrated by the a recent poliovirus type 1 outbreak, in which up to 80,000 Syrian children may have been exposed to the virus. In addition, there has been an increase in the incidences of diphtheria, typhoid, measles, tuberculosis, whooping cough, dysentery, and leishmaniasis since the conflict began in 2011.

A 2011 United Nations (UNHCR) handbook entitled Epidemic Preparedness and Response in Refugee Camp Setting states the obvious, that appropriate infrastructure and a trained staff are crucial to preventing disease outbreak. However, the document fails to address perhaps the most important cause of outbreaks in epidemics, the lack of suitable sanitary education and provision of the vulnerable population. Furthermore, while the document does suggest budgeting for, and building, appropriate infrastructure, this is often a slow process that does not usually work well during crises of unprecedented proportions which have become more common over the last few decades. Unfortunately this problem has increased in that time due to greater, massive injuries and casualties and a refugee population over half of which are under the age of eighteen. In Syria, the problem is exacerbated by the majority of displaced persons still being inside the country under warlike conditions. Furthermore, the Syrian government has not permitted access for Non-Government Organizations (NGO’s) and the United Nations to help manage the crisis. The result is little or no funding for measures to prevent and contain outbreaks. So how then can we keep such a vulnerable population safe in the face of more daunting challenges like insufficient food and water? 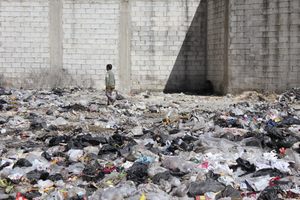 Upon withdrawing from a city, the Syrian Assad regime discontinues all basic sanitation within the area. Pictured here is a boy wading through trash that has been uncollected for months in the city of Aleppo. Source: Shiyam Galyon

The primary solution may be just as simple and inconspicuous as making people aware of fecal-oral transmission, i.e., educating the population on basic sanitary measures such as hand washing. Providing a bar of soap and teaching about fecal-oral transmission is likely to limit or prevent the outbreak of intestinal infections, at least temporarily. So are simple measures, such as building diversion ditches to keep effluent from tents. Investing to provide basic sanitation could be enough to prevent disease outbreaks. While it is reasonable to be skeptical of such a simple solution, the data collected from the Haiti crisis should quell such doubts.

Morbidity and mortality in the aftermath of natural disasters create a severe drain on limited public health resources, resulting in a devastating effect on economies and the health of the population as a whole as acute healthcare begins to take precedent over chronic healthcare. Ultimately, despite being as small as they are, microbes can be bigger than we realize and it is in our best interest to always remember that application of simple solutions can often limit their impact. Even outside the lab, practical applications and considerations of microbiology in the real world can lead to significant outcomes.

Acknowledgement
I would like to express my utmost gratitude to Dr. Steven C. Specter for his guidance, support, patience, and mentorship throughout the process of writing this post.

Noor holds degrees in Microbiology (B.S.) and Economics (B.A.) from the University of South Florida. She is a policy fellow for the Syrian Emergency Task Force. Starting in January 2015 she will be working in the ASM's Office of International Affairs.