« Hydrophobic Sequestration | Main | Making MutantsAnd Watching Them "In the Making" »

Figure 1. Autoradiograph of a chromosome of E. coli labeled with thymine-3H (5 Ci/mmole) for several minutes, beginning at the time of initiation of the DNA replication cycle, and then for 8 minutes with thymidine-3H (50 Ci/mmole). The origin of chromosome replication is located in the region of the light, central autoradiographic image produced by the thymine-3H. The denser, long images at both ends were produced by denser radioactivity of thymidine-3H added thereafter. Replication forks are located at the two ends of the autoradiograph. The two daughter duplexes are discernible, the unlabeled parental DNA presumably extends from the two replication forks. Exposure time:6 weeks. Bar: 60 µm. Source

In #2 of our 'Pictures Considered' series Elio had con­si­der­ed the iconic autoradiograph by John Cairns showing an intact circular Escherichia coli chromosome. We had a brief discussion in the comments to that post whether Cairns' autoradiograph proves – in addition to circularity – bidirectional replication of the E. coli chromosome and concluded: No, it doesn't. In an addendum, Elio gave credit to the work that actually proved bidirectional replication and showed a picture. Well, that picture was not the one I had in mind, and it took blowing layers of dust from piles of very old papers to finally get hold of it *). Here we are: #23 (Figure 1).

Prescott & Kuempel give a detailed description of their method which bears the typical smell of expert work in the "wet lab". Next to the labeling procedure they describe the crucial step: "Spreading (of DNA) is done on microscope slides coated with a thin layer of gelatin applied as a subbing solution. DNA released from cells with N-lauroylsarcosine adheres much better to subbed slides than to clean glass. A drop (approximately 5 µl) of cells is placed at one end of the subbed slide. If bacteria are being used, the cell wall must first be digested with lysozyme. An equivalent amount of lysing solution is then placed adjacent to the drop of cells. We have achieved the best lysis and spreading using a 2% solution of N-lauroylsarcosine containing 0.01 M EDTA and buffered at pH 8.1 with 0.01 M Tris. The two drops are allowed to fuse, and the mixture is left undisturbed for 10 ‒ 15 minutes at room temperature to permit lysis of cells or spheroplasts and release of high molecular weight DNA. The cell lysate is then spread over the microscope slide with a second microscope slide in the same manner that a blood smear is made. This is accomplished by holding the second or "spreading" slide at an angle of approximately 15° to the subbed slide and slowly drawing the "spreading" slide up to the lysate until the lysate uniformly fills the acute angle between the two slides. The "spreading" slide is then slowly pushed in the opposite direction down the length of the slide, spreading the lysate behind it. The slides should then stand upright until dry." Despite their use of thymine/thymidine at extremely high specific radioactivity (3H at 50 Ci/mmole!) exposure of the slides for autoradiography took up to ten weeks – which they considered 'reasonable'. And while following the lines of grains on an autoradiograph under the microscope was routine, actually finding the ~1% of chromosomes displayed in an interpretable fashion was tedious. The entire procedure was in a way the forerunner of today's single-molecule experiments. 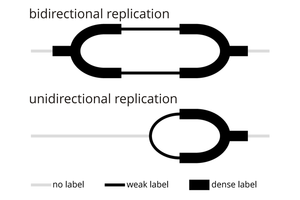 As informative – and esthetically pleasing – this autoradio­graph is, it was an experimental 'dead end' with respect to mapping the exact location of the replication origin on the E. coli chromoso­me. This was achieved later by genetic mapping and cloning of minichromosomes – selectable plasmids that depend on a cloned replication origin for maintenance – in a fierce competition between the labs of Yukinori Hirota and Walter Messer, which culminated in their simultaneous presentation of the complete oriC sequence of E. coli  at the XLIII Cold Spring Harbor Meeting in 1978.

*) This is, admittedly, the Indiana-Jones-version. Reality was more profane: it only took some Googling to find the PDF on the journal homepage. However, it illustrates the policies of the publishing company that they charged $ 38.12 (incl. tax) for the 1-time download of a 40 year-old paper.