Lively Reading for Our Phage World 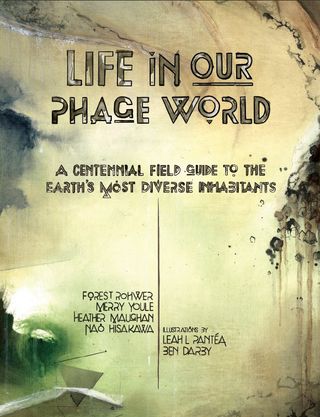 Figure 1. Life in Our Phage World
by F. Rohwer, M. Youle, H. Maughan, and N. Hisakawa
Illustrated by L. Pantéa and B. Darby
Published by Wholon.

How often do you come across a book that sets the stage for a new genre, one that embodies a novel concept of how scientific books could be written? That is rare, indeed, but here is one fashioned by an original notion of how to present science to scientists. Between its covers, stiff presentations of cold facts and formally stated interpretations give way to a conversation between writer and reader, what you could imagine the writers would discuss with you, were they in your presence. What makes this so is a combination of novel ways of presenting material including original drawings, unexpected maps, and a language that is actually clear and friendly English. You will search in vain for scientific jargon or academese here. Instead, you'll encounter language that is chatty, illuminating, and sometimes droll.

So, what is this gift to microbiologists all about? It is a compilation of articles about phages, written to commemorate the centennial of their discovery. Over two years ago, Forest Rohwer thought it unfair that there were field guides to the mollusks, the trees, the spiders, the lichens, even the bacteria, but not to the Earth's most abundant life form. What better time to fix that than this centennial year? Each of the 30 featured phages comes with its own field guide pages that include its defining characteristics, a portrait, a family tree, a genome map, and its known geographic range. Each is accompanied by an action "story" relating how it lives its particular phage life. Included also are eight "Perspectives," think pieces about general topics by contributors other than the authors (in order of appearance: Daniel Nelson, Ben Knowles, Matthew Sullivan, James Van Etten and David Dunigan, Elizabeth Kutter, Graham Hatfull, Dennis Bamford, and Kenneth Stedman). Each provides a personal glimpse into the life and work of a phage researcher. 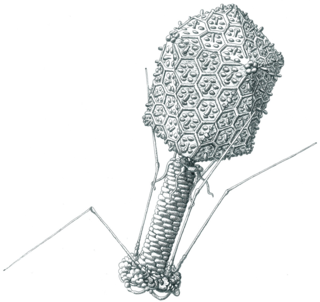 The 30 phages chosen for portrayal include familiar ones (e.g., coliphages λ, Qβ, and T4; Bacillus subtilis phage φ29) along with some lesser known ones. The authors’ "phage" sensu lato definition allows them to include a couple of archaeal viruses and two viruses of eukaryotic microbes (Mimivirus and yeast virus L-A). Phages were chosen to encompass not only diversity but also to illustrate unorthodox ways of life. For starters, you will encounter phages that single-handedly rival the vertebrate adaptive immune system in generating diversity, being able to make 1012 variants of their receptor binding proteins (think of it – one phage can outdo our whole complicated business of lymph nodes, spleen, bone marrow, etc.), others that attach to bacterial flagella or pili (one does it via a filament on its head!), yet others that make a tube for delivering their DNA into the host, or bring their capsid with them into the infected host. More of this magic reveals phages with segmented genomes; one with two tails that finish growing outside the cell, and another that sports pyramids on its capsid. You get the idea: this is Alice in Wonderland in spades! Even conventional sounding topics get their moment under the sun. These include CRISPRs, lytic-lysogenic switches, restriction mechanisms, and others. The true and tried tactics of T4 are used to make the point that the complex of host and virus becomes a unique biological entity, the "virocell." And the "perpetual arms race" between E. coli and its T-even phages is presented as a boxing match in five rounds.

Unconventional though the book may be, it does pay attention to established topics such as viral evolution, taxonomy, and ecology. These matters are persistently brought up in various contexts, making for a lively consideration of all matters phagic. But in a parting shot, the authors couldn't resist adding yet another personal touch. A section in the Appendix deals with a "New Lexicon of Phage Behavior." By this, they mean a way to describe phages in the context of ethology, the science of behavior of living things. Under titles such as "Prowling for a Partner," "Court Host," "Wean Progeny," and others, they present in illustrated form the interactive elements of each "action story." How well does this particular approach work? I'm not sure. I suspect that this is a matter of individual preference, so I suggest that all try it for themselves. But, for sure, you won't find such an arrangement anywhere else!

When you first leaf through the book, you will be drawn to the unusual illustrations, some of phages and their activities, others largely ornamental. They make their points. I found them to be an original contribution to the book, especially the ones that depict the virions and their genomes. Unique to this book are maps of the Earth showing sites where particular phages have been found, largely in metagenomes, and in the process reminding us how many places we have not yet looked.

I was left with a cuddly feeling that this is not just another exercise in presenting information and ideas. This is sharing a sense of awe and love for the most abundant entities of our biosphere and, no doubt about it, some of the most influential and exciting of our fellow passengers. Bravo!

A disclosure. One of the authors, Merry Youle, and I have worked together on this blog for seven years, particularly intensely as co-bloggers. During that time, we have become not only close collaborators but also friends. I have tried not to let this get in the way of writing what I hope is an impartial critique of this book.