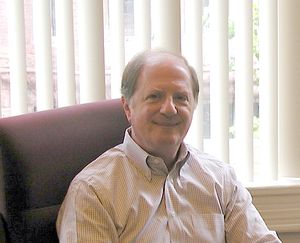 You must have heard it said that no one is indispensable to an institution. Maybe so, but such truths come in degrees. Every so often someone comes along who makes a genuine difference in how an organization functions. I turn here to Michael Goldberg, who thirty years ago began a most distinguished career as Executive Director of the ASM. He retired at the end of 2014, leaving behind a legacy of splendid accomplishments. His tenure, the longest by far of any Executive Director, was characterized above all by an affirmation of the values of the Society, which are to foster the progress of our science in all its aspects — education, research, communication, public national and international affairs, professional relations, and others. Michael truly made a difference. By his leadership and administrative savvy, he ensured that ASM holds a unique role among professional societies and continues to be recognized as the leading organization of our science worldwide.

To be personal, I worked with Michael on and off during his time in office and we have become friends. I served as president of ASM at the time he was hired. During his recruitment interview, he talked in a most articulate way of the mission of ASM. I still remember how he explained in simple terms what this meant to him and how he could foster these goals. It's hard to believe it, but he didn't deviated from it in all these years. It remained his guiding principle through thick and thin.

In case you haven't run into this, presidents of ASM come and go (they serve for one year, whereas some of the other officers serve for a longer time), but the staff remains. Thus, the person in charge of operating the Society's headquarters plays a unique role in its continuity. At its worst, this could cause a fossilization of the bureaucracy. At its best, as under Michael, it is an opportunity for retaining what works and refining what needs adjustments. This is best seen by the quality of the ASM staff, which, in my opinion, is truly outstanding. With a gentle hand and a concern for the staff he directed, Michael revealed himself to be a master in this particular art.

In my experience, there is no finer professional Society than the ASM. And we know who has been responsible for it. Thank you, Michael.

A disclosure. The ASM provides technical and moral support to this blog, which significantly benefits from it.