The rapid pace of bacterial evolution is thought to result from the ease with which these organisms acquire new genetic information. What is the source of the genetic variation behind these bits of razzle-dazzle? The primary basis of bacterial phenotypic plasticity has long been considered to be changes in gene content resulting from horizontal gene transfer (HGT) as well as mutations and gene duplications. HGT allows a bacterial strain to acquire novel, useful traits through acquisition of DNA from non-parental strains. Mechanisms of HGT include transformation, transduction, conjugation, and transposition, and genes acquired in this way can confer antibiotic resistance, pathogenicity, or the ability to use novel metabolic substrates, among other traits. But far less attention has been given to HGT of non-coding DNA, which may contain regulatory elements such as promoters. Isn't the transfer of regulatory elements at least as important as that of coding genetic sequences? Oren and coworkers now examined the extent of non-coding DNA exchange, or "regulatory switching," and the phenotypic consequences it holds for the recipient. 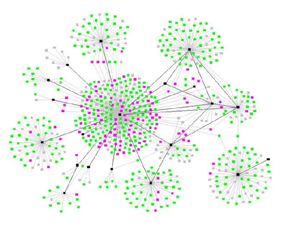 Core genes, which encode "housekeeping" functions, are highly conserved across members of a clade. Therefore these stodgy genes, likely to be essential, would not be expected to undergo regulatory switching. However, comparing a large set of core genes (1479 of them) across 46 E. coli genomes, the researchers found that a surprising 13% of the upstream regulatory regions appeared to be non-homologous. In other words, the regulatory regions and the genes they regulate had different ancestry. Taking a closer look, they zeroed in on a single gene operon that encodes ferrochelatase, the terminal enzyme in the biosynthesis of heme. Gene hemH and upstream gene adk display >98% amino acid identity across all 46 E. coli strains examined, but the regulatory region between these two genes was found to contain two very distinct non-homologous sequence types. They found that a full 11% of core genes among the 46 E. coli genomes have at least two distinct regulatory sequences identifiable. A remarkable amount of regulatory switching among a crowd known for its conservative traits!

A comparison of the E. coli species tree with the distribution of the hemH regulatory regions revealed that the two do not match, implying that the regulatory regions were not acquired vertically (from the parent), but horizontally (from non-parental bacteria). For vertical transmission to make sense, a series of highly unlikely independent acquisitions and recombinations would be required. The authors therefore dubbed this mechanism "horizontal regulatory transfer" (HRT), and they found that a full 32% of promoters in their data set were acquired horizontally and independently of the genes they regulate.

Figure 2. Operon structure and a representative multiple sequence alignment of the regulatory region of hemH (20 of 46 sequences are shown). The first line and the last line depict the nucleotide sequence of representative strains from each sequence type. Gray boxes represent gaps in the alignment. Binding sites of ArgP, DnaA, and OxyR are boxed. The numbered labels in the left margin indicate the two alternative regulatory types that are found in hemH. Source

Where do transferred genes come from? At least one of these regions was transferred across species. Among 22 strains of E. coli, the leader sequence of metE  — the gene for methionine synthase — more closely matched that of Enterobacter than that of other E. coli strains. The surrounding core genes, by contrast, matched the species phylogeny, suggesting that the regulatory region alone was acquired horizontally. It also appears that the transfer was from Enterobacter to E. coli, because other species of Enterobacteriaceae close to E. coli all display the predominant E. coli regulatory region rather than the Enterobacter allele. And the fact that all the acquired E. coli alleles were almost identical suggests that the transfer occurred recently. Interestingly, the majority of the E. coli strains that acquired the allele are uropathogenic.

And then? If the incidence of HRT in core genes is ~11%, wouldn't we expect an even higher incidence of HRT in accessory genes, those not involved in essential functions, which are generally less conserved? Surprisingly, this is not so. An examination of 2,286 accessory E. coli genes found a frequency of HRT of just 11.8%. To make sense of this, the authors remind us that the likely mechanism of HRT involves homologous recombination, which requires short stretches of sequence identity between donor and recipient. By this thinking, the most fertile grounds for homologous recombination are regions of the genome that are most conserved across strains. We might in fact expect, then, that the longest jumps — those occurring between more distantly related strains or species — would be found among the regulatory regions of core genes. Of interest, they also found that switching took place among all functional categories, including global regulators. Think of the possible impact of this — cis rewiring of a single global regulator protein could result in large downstream effects in trans, enabling dazzling adaptive leaps. Also, regulatory switching occurred more frequently in signal transduction pathways, which would allow for rapid responses to changes in environmental stimuli.

When a novel promoter region is acquired by mail order, so to speak, how does this impact the gene transcription start site (TSS)? Is the new promoter like your new MacBook, requiring you to change your power source? The authors synthesized a total of 1693 promoters from switched and unswitched core gene clusters, and generated an E. coli promoter library. After transforming E. coli with the library, expression data allowed them to determine TSS positions for 485 promoters from 40 different E. coli strains.  From these data, they were able to compare mean divergence among TSSs between the switched and unswitched groups, which was fivefold higher in the switched group. These results show that switching does indeed drive promoter architecture divergence. 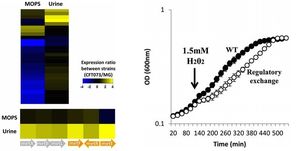 Figure 3. Left Expression of switched genes exhibiting condition-specific expression divergence. Right Condition-dependent divergence of the methionine biosynthesis pathways. Genes affected by regulatory switching are marked by orange arrows. Although both strains express the pathway in a similar manner when grown on MOPS, the pathogenic strain shows up to 16-fold higher expression of the pathway when strains are grown on urine. Right Replacement of the short metE regulatory allele with the long ancestral allele renders the pathogenic bacteria more sensitive to oxidative stress. ● : parental strain; ○ : "switched" strain. Source

Benefitting From The Ole Switcheroo. Does regulatory switching alter the transcriptional response? RNA-seq was used to compare expression patterns of a set of orthologous genes in two strains of E. coli, one a gastric commensal and the other, uropathogenic. Gene expression levels were measured under different growth conditions to identify genes whose expression changed in response to the environment. They found 266 genes whose expression levels varied significantly when the strains were grown in defined minimal media, and 219 such genes when grown in pooled human urine. Lo and behold, these environmentally responsive genes were enriched for switched genes, which were threefold higher than in the conserved expression group. Also, the switched group as a whole showed greater expression divergence than the unswitched group. Of the switched genes that showed expression divergence, 45% did so under only one of the growth conditions, thus highlighting the importance of this phenomenon in allowing the bugs to respond to environmental cues.

Uropathogenic E. coli has to deal with oxidative stress generated by the host immune cells. Interestingly, the gene whose expression varied the most during growth in urine, metE, is known for high sensitivity of its gene product, methionine synthase, to oxidation. Might regulatory switching confer a fitness advantage under certain stresses, in this case, oxidation? To test this, a strain was constructed that was identical to the parental uropathogenic strain, except that the regulatory allele was replaced with the ancestral allele found in commensal strains. This new strain grew normally on minimal media lacking methionine, but under oxidative stress it showed a marked growth defect relative to the parental strain. Thus it appears that a single HRT event — with no change to the gene's coding region — made a pathogenic strain more resilient, elucidating the selective pressure behind the switch. Examples of other benefits will undoubtedly be discovered in the future. 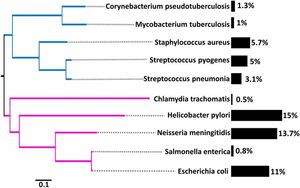 Figure 4. Regulatory switching is ubiquitous across the bacterial domain. The bacterial species phylogeny based on 29 concatenated ribosomal proteins obtained from a study by Williams et al. is shown. Bars indicate the level of regulatory switching observed across all genomes within each clade. Numbers at the end of each bar correspond to the percentage of core genes exhibiting regulatory switching. gram-negative and gram-positive taxa are shown in purple and blue, respectively. (Scale bar: substitutions per site.) Source

Everybug is doing it. The cases of HRT that we've seen so far have been limited to E. coli and its cousin Enterobacter, representing two genera of the large, gram-negative family Enterobacteriaceae. But how common is HRT in other neighborhoods of the bacterial domain? Do the gram-positives across town do it, too? When they extended their analysis to nine additional taxa, representing a broad range of characteristics (including being gram-positive), they found that all clades exhibited switching. Intriguingly, frequency of switching in core genes varied greatly — from 0.5% in the pathogen Chlamydia trachomatis to 15% in the highly recombinogenic pathogen Neisseria meningitidis. What could be the pattern behind this variation? One factor that partially explains switching frequency is the overall recombination-to-mutation (r/m) ratio, which is low in low-switching species, and high in those with high switching levels. Other factors likely relate to accessibility to foreign DNA and the ability to acquire it (competence). For example, H. pylori — the bug known for causing gastric ulcers — is naturally competent (others need to be coaxed into it), and it had the highest level of switching. Shared transcription factors between donor and recipient may also play a role.

Taking a dip into the metaregulome. The extent of regulatory switching among core genes affords them a larger role than previously suspected in phenotypic adaptation and diversification. Notably, there is an interesting parallel to bacterial HRT in the eukaryotic kingdom: Genes sometimes acquire new promoters from retroviruses that have inserted nearby. As the authors point out, adaptation requires the crossing of fitness valleys, and perhaps a fitness valley produced by a mutated gene-coding region is more likely to be fatally steep, while fitness valleys produced by a switched regulatory region could be less daunting. In this way, HRT allows a bug to explore mutational space while maintaining the coding regions of essential genes. The authors refer to this new vista into microbial genetics and evolution as the "metaregulome", from which many more important insights will be forthcoming.