The Archaellum — The Motility Structure of Archaea 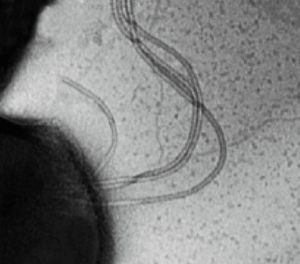 Figure 1. A S. acidocaldarius cell has only one to three archaella, so to see the results of deleting the FlaI gene the researchers created first mutant strains with many archaella. Source

The two prokaryotic domains, Archaea and Bacteria may share the same general body plan and be hard to tell apart at a glance, but they differ in many of their constituent parts. The list of differences is quite long and includes strategies for synthesizing macromolecules, making protective cell envelopes, and, perhaps surprisingly, their organs of locomotion. We say this because the bacterial flagellum is such an intricate and complex structure that, once evolved, it might as well be used generally. Or vice versa, the archaeal "flagellum" may have been adopted by bacteria, depending on your phylogenetic taste. Not so. The two have evolved structures that differ in their way of leading to the motility of their cells. Let's look at them closely.

Research on archaeal surface structures took off when Alam and Oesterhelt in Martinsried, Germany began studying the swimming behavior of Halobacterium salinarum (then Halobacterium halobium), a salt loving (halophilic) Archaeon. They thought that its motility structure might be different than the bacterial flagellum although at first look the two structures had many things in common. Soon, Gerl and Sumper cloned and sequenced flagellins from H. salinarum and found, remarkably, 5 different genes, all encoding proteins whose amino acid sequences were highly conserved. But these proteins showed no significant sequence similarity to any proteins in the protein databases available at the time, including bacterial flagellins.

Figure 2. The motile structures in Bacteria and Archaea: the archaellum (center) functions like a bacterial flagellum but its structure resembles a bacterial Type IV pilus. Source

Surprises did not stop there. The H. salinarum flagellins were found to have another unusual feature: they were glycoproteins, with an attached N-linked glycan (Wieland et al.). Moreover, glycan was added on the outside of the cytoplasmic membrane (Sumper). This prompted early speculation that the archaeal structure was assembled differently than the bacterial flagellum (Gerl & Sumper). As more archaeal flagellins were studied, it became evident that N-glycosylation was a common modification. While some bacterial flagellins are also known to be glycoproteins, they universally possess O-linked glycans. It turned out that interfering with N-glycosylation had dramatic effects on archaeal flagella assembly and function (Chaban et al., Tripepi et al., Meyer et al., and others).

The first archaeal genome to be sequenced was of Methanococcus jannaschii in 1996. Neither it nor those sequenced subsequently had genes homologous to ones encoding proteins important for the biosynthesis of the bacterial flagellum (Faguy & Jarrell, Nutsch et al.). A further major discovery that distanced them from the bacterial flagellins was that the archaeal ones had signal peptides and are made of preproteins (Kalmokoff & Jarrell). Bacterial flagellins do no such thing. As more sequence information became available for archaeal flagellins, especially N-terminal sequence data, the proteins of their filaments had a conserved N-terminal region homologous to those found in bacterial type IV pilins (Faguy et al.). 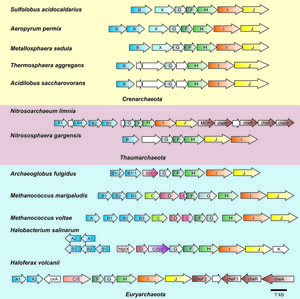 (Click to enlarge) Figure 3. Archaellar operon structures. The organization of the archaella operons in the three archaeal kingdoms in which they were identified is depicted. The fla genes are abbreviated using the respective letter of the fla gene. Homologous genes are given in the same color. Genes depicted in white are unknown hypothetical genes. Abbreviations: MCP, methyl accepting chemotaxis protein; che genes, genes encoding parts of the chemosensory system; htrI, methyl accepting transducer. Source

As more archaeal genomes were sequenced and the motility structures of Halobacteria and Methanococci studied genetically, it became clear that operons encoding the archaeal structures were indeed not related to that of bacterial flagella, but rather to bacterial type IV pili. As in type IV pili the N-terminal signal peptides of the filament protein is processed by a dedicated type IV prepilin peptidase that is homologous to the bacterial PilD enzyme. It is called FlaK in methanogens and PibD in halophiles and Crenarchaeota. This mechanism implies that the structure of the filament is similar to type IV pili assembled in a three start helical way, which was confirmed by the work of the Trachtenberg lab. Critically, this structural work indicated that the archaeal appendage lacks the central channel through which pass the subunits, to be added at the distal end of the growing structure in the assembly of the bacterial flagellum. Moreover the archaeal fla operon contains genes for an ATPase and an integral membrane protein that are homologous to the pilus assembly ATPase PilB and the inner membrane protein PilC of Gram negative bacteria.

The archaeal flagellum, therefore, is more closely related to bacterial type IV pili than flagella. Type IV pili are known to mediate twitching motility via an assembly/disassembly mechanism, but, once again, the archaeal flagellum comes up with another surprise: it was also demonstrated for the halobacterial structure that its rotation is dependent on the hydrolysis of ATP further setting the archaeal motility apart from bacterial flagella, which use the proton motive force for their rotation.

So many things are different in the archaeal flagellum — structure, mode of action, and assembly mechanism — that we proposed in 2012 a new name for it; the "archaellum" (Jarrell & Albers). This emphasizes its uniqueness and clearly sets it apart. While this proposal has met with some criticism, the name is found with increasing frequency in publications. 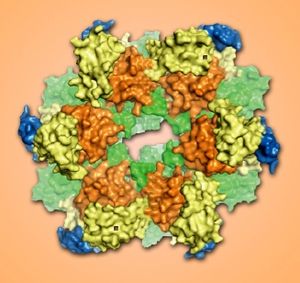 Figure 4. FlaI monomers arrange themselves into six-unit rings resembling a crown. Releasing a phosphate from ATP energizes a series of conformational changes that drive assembly and motility in the archaellum. Source

Notably, the archaellum is unique in being simpler than its bacterial counterpart. In crenarchaeota the archaellum operon comprises only 7 genes (as opposed to some 30 − 40 for bacterial flagella), yet this structure can still deliver the same swimming forces as the flagellum. In fact, Archaea have been shown to be among the fastest swimmers in the prokaryotic world (Herzog & Wirth). It is still unknown how a type IV pili-like motor achieves rotation. Interestingly, it was shown that FlaI, the only ATPase in the archaellum operon, is bifunctional. At one hand, FlaI is essential for the assembly of the archaellum filament, and on the other, it is responsible for the rotational movement (Reindl et al.). An N-terminal deletion mutant of FlaI was still able to assemble archaellar filaments but was non-motile. This supports the notion that archaellum rotation is ATP dependent in halobacteria. In the crenarchaeota, the motor ATPase FlaI has been shown to interact strongly with FlaH, a nucleotide binding protein, and with FlaX, which forms a 30 nm ring structure, probably the folding scaffold for the motor proteins (Banerjee et al.).

Structural and functional analyses of archaellum subunits to understand their role in the assembly and rotation of the structure are scarce, but we slowly learn more and more about this fascinating motility structure. It's intriguing that Archaea and Bacteria developed so very different motility structures although in both organism groups type IV pili are very common surface structures. As you can see, Archaea are a continuous source of surprises, in part because they are not being studied with the intensity they merit.

Sonja-Verena Albers is Professor for Microbiology at the Institute of Biology II, University Freiburg, Germany

STC likes to inform its readers that the review "The Archaellum: How Archaea Swim" by our guest authors Sonja-Verena Albers and Ken F. Jarell was published on January 8th in frontiers in MICROBIOLOGY (open access).