The Most Abundant Small Things Considered 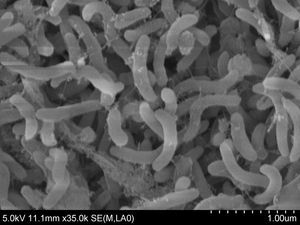 The pioneering sequencing of environmental 16S rRNA bacterial genes from Sargasso Sea samples, reported by Giovannoni and colleagues in a 1990 Nature paper, revealed a great genetic diversity of marine bacteria. It also identified the most abundant rRNA sequences as belonging to a group of bacteria with no cultivated representatives, a group collectively known as the SAR11 clade. Subsequent quantitative studies provided evidence for the astonishing numbers that SAR11 cells reach in the oceans. On average, the SAR11 clade comprised one third of all of the prokaryotic cells in the surface waters (the euphotic zone), accounting for up to 50% of the total in some regions. The clade was also abundant in deeper layers (the subeuphotic zone below 200 m), being on average one fifth of the cells here and, in some cases, representing up to 25% of the microbial community. It is easy to appreciate their dominance in terms of cell numbers per ml of water: 2.0 × 105 ml−1 in the euphotic zone and 0.2 × 105 ml−1 in the waters below. Not only are they abundant, they are ubiquitous. Global estimates are that there are 2.4 × 1028 SAR11 cells in the oceans!

Despite their abundance and global distribution, this enigmatic SAR11 clade defied cultivation until 2002, when the first representative, Pelagibacter ubique strain HTCC1062, was cultured. In contrast to standard practices that rely on rich cultivation media for isolation of novel strains, the researchers used very low nutrient concentrations, sterilized natural seawater, and other conditions that closely mimicked the natural habitat. Close attention to the environmental variables paid off and allowed for the enrichment of SAR11 cells in the cultures and the successful isolation of several representative strains. The researchers were also patient: generation times for the strains ranged from 25 to 50 h. Slow as this may be by laboratory standards, it is similar to or even faster than the overall growth rates measured for the total microbial communities of which SAR11 cells are a part. Furthermore, the contribution of the SAR11 cells to heterotrophic production is greater than expected based on their relative abundance, particularly when phosphate is limiting. For example, SAR11 bacteria from the Northwest Atlantic Ocean, which account for 25% of the microbial community in these aquatic environments, can incorporate more than half of the amino acids and glucose assimilated by the microbial community as a whole. Not bad!

Figure 2. Red marks indicate locations where SAR11 rRNA genes have been detected using molecular techniques. Although 52 individual samples are represented, many studies along the US Pacific coast and in the North Atlantic have been conducted at the same sample locations and are therefore represented by a single red mark. Source

Small and "gassy". Having P. ubique in culture allowed the Giovannoni lab to start investigating the strategies that account for its extraordinary success. The first notable characteristic is that these bacteria are small. Soon after cell division, cells are crescent-shaped, 0.37 – 0.89 μm long with a diameter of 0.12 – 0.20 μm. Such dimensions yield a volume of ~0.01 μm3, making P. ubique one of the smallest free-living cells ever cultured. For comparison, 'tiny' autotrophic Prochlorococcus has a 0.6 μm diameter, and the diameter of the smallest eukaryote presently known, Ostreococcus tauri, is 1 μm. By combining this small volume with a vibrioid shape, P. ubique achieves an even higher surface-to-volume ratio, which is critical for maximizing the flux of nutrients and waste products into and out of the cell, respectively. Increased diffusional rates confer an advantage on these small cells when scavenging the scarce nutrients available in their oligotrophic environments, thus promote their growth. Not surprisingly, despite their small size, en masse they represent 12% of the marine prokaryotic biomass.

Their ubiquity, abundance, and efficient metabolic adaptation to their environment suggest that these bacteria have a major impact on global carbon cycling. SAR11 cells live and grow by converting labile dissolved organic carbon into atmospheric CO2. Just how much CO2 they release en masse to the atmosphere is yet to be determined, but predictions are that it will be a lot. Furthermore, SAR11 cells may also contribute to the release of methane to the atmosphere — a significant activity for climate change since methane is 20-times more potent as a greenhouse gas than CO2. Marine waters contain a surprisingly high amount of methane. Oceans are 5 − 75% more saturated with methane than the atmosphere, suggesting that methane production takes place in marine environments and migrates from there to the atmosphere. Scientists have for long sought the source of the ocean's methane. They ruled out canonical methanogenesis pathways, as those require strictly anaerobic conditions that are not present in the oceans where methane biogenesis is known to occur. To explain the "marine methane paradox", researchers proposed that some marine microbes may use the methylphosphonate (Mpn) pathway to scavenge for phosphate, thereby producing methane as byproduct. Genomic and metagenomic data predicts that ~10% of bacteria in the oceans are capable of Mpn synthesis, and ~30 − 40% are equipped for Mpn catabolism. Some SAR11 strains (but not P. ubique HTCC1062) are among those that use this pathway when starved for phosphorus and produce methane as a byproduct. This, together with their staggering abundance, suggests these bacteria make a significant contribution to the methane emissions from the oceans.

P. ubique  secrets revealed by genomics. Tiny as it is, you may not be surprised to learn that P. ubique also has a small genome (1,308,759 bp), currently the smallest genome known for a free-living organism. The genome encodes 1,354 predicted proteins, 1 rRNA operon , and 32 tRNAs. The sequenced strain (HTCC1062) has no prophages or pseudogenes, and carries an exceptionally low number of paralogs. Genome data indicate that this bacterium possesses the complete pathways required to generate energy by respiration and also to harvest energy from the sun using proteorhodopsin, a light-dependent, retinylidine proton pump. P. ubique is also equipped with numerous high affinity nutrient transporters, consistent with a competitive strategy for nutrient scavenging. Most are ABC transporters, a large and ancient protein family noted for providing high substrate affinities at the cost of copious ATP. Clearly, the cells invest in transport to outcompete other microbes in nutrient acquisition and, based on their abundance and efficient assimilation of organic matter, they have succeeded. 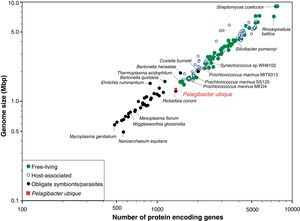 P. ubique encodes few alternative metabolic pathways in its streamlined genome. Instead it has specialized as a small, highly efficient heterotroph adapted for competitive success in an invariable oligotrophic environment. A single rRNA operon is sufficient to maintain their moderate but steady rate of growth. Furthermore, unlike larger marine heterotrophs, they do not respond by growing faster when provided with more nutrients. These and other genomic traits suggest that P. ubique is under strong selection pressure to keep its genome small. Such a small cell size also constrains genome size. Even though compacted, their chromosome occupies about 30% of the cell volume. Environmental adaptation is also suggested by the low (29.7%) G+C content of its genome. As one less nitrogen atom is needed in a A-T bp than in an G-C bp, nitrogen-limited environments such as those inhabited by P. unique often select for low G+C genomes. Furthermore, DNA replication requires not only carbon, nitrogen, and phosphorus assimilation, but substantial amounts of energy. A larger chromosome could compromise the careful balance of metabolic efficiency and growth. Evolutionary theory predicts that selection based on the metabolic cost of DNA replication will be strongest when the population is very large and stable over time. This is precisely the situation for P. ubique. 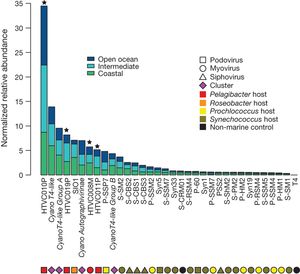 (Click to enlarge) Figure 4. Abundance of pelagiphage relative to representative cyanophages and roseophage SIO1. Stars denote pelagiphage genomes identified in this study. To highlight the relative abundance of HTVC010P compared to known cyanophage subfamilies, the abundance of subfamily members identified were summed and are represented as clusters (italics). Non-marine negative control sequences (Enterobacteria phage T4 and freshwater Synechococcusphage S-CRM01) were included in the analysis. Source

Enter the pelagiphages. When the high cell counts for the SAR11 clade were first reported, some people wondered how these abundant 'winners' escaped the kill-the-winner (KTW) predator-prey dynamic. Some postulated that they dodged phage predation altogether due to their combination of exceptionally small size, which reduces the frequency of phage-host encounters, and slow growth, which limits the number of progeny produced by each successful infection. It was also suggested that some SAR11 strains might carry prophages that protect them from infection by the same or closely related phages. But the fact is that P. ubique carries no prophages and it is subject to predation by diverse and abundant pelagiphages. The four pelagiphages isolated and characterized to date are all lytic, three of them being stubby-tailed podoviruses (average genome size of 38,979 bp) and one a myovirus (long contractile tail; 147,284 bp). All four had similar latent periods (average 19 − 22 h), but burst size varied from 9 (larger myovirus) to 43 (smaller podoviruses). The burst sizes may reflect the number of progeny virions that can be made from the resources of these small cells — fewer for the larger pelagiphages and more for the smaller.

How does P. ubique stay one step ahead of its phages and maintain its high abundance? It has neither a CRISPR defense nor a restriction-modification system based on DNA methylation. The answer may lie in its strain-level diversity. KTW acts at the strain level, decimating phage-susceptible strains while allowing resistant ones to prosper. The net effect is stable numbers at the species level and a high diversity of strains. Indeed, genome diversity in the SAR11 clade is exceptionally high. This was already apparent from the difficulties encountered that prevented assembly of complete SAR11 genomes from Sargasso Sea datasets despite the seemingly adequate depth of coverage. Furthermore, an analysis of nine strains of P. ubique isolated from a two liter sample of surface water collected off the Oregon coast revealed frequent intraspecific recombination in seven of the eight genes studied. So high were the measured recombination rates that the researchers concluded: The eukaryotic model of species sharing a common pool of alleles is more apt for this SAR11 population than a strictly clonal model of inheritance in which allelic diversity is controlled by periodic selection. Later work confirmed and extended this finding.

Some of the P. ubique interstrain diversity also mapped to hypervariable regions involved in primary defenses against phage infection. This included genes that encode the cell surface components that phages require for adsorption — their first step en route to infection. The arms race between phages and their hosts often plays out in the rapid evolution of these host components that the phages then counter by modifications of their host recognition and binding proteins.

As metagenomic research accelerates, will SAR11 retain its title as the most abundant organism on the planet? Even if it retains its number one rank in ocean waters, globally it might be superseded by one residing in the subsurface. The prokaryotes in the subsurface zones beneath the oceans and the continents may be even more abundant than those in the ocean waters, as estimated in Whitman's classic 1998 paper. Considering how little we know about the microbial communities from those less accessible realms, it seems possible that a new contender will be discovered and SAR11 will be dethroned. Would anyone care to make a wager?