Wood Digestion with Nary a Microbe in View

The vessel, though her masts be firm,
Beneath her copper bears a worm;
Around the cape, across the line,
Till fields of ice her course confine;
It matters not how smooth the breeze,
How shallow or how deep the seas,
Whether she bears Manilla twine,
Or in her hold Madeira wine,
Or China teas, or Spanish hides,
In port or quarantine she rides;
Far from New England's blustering shore,
New England's worm her hulk shall bore,
And sink her in the Indian seas,
Twine, wine, and hides, and China teas.
— Henry David Thoreau (Through All The Fates)

Xylophagy. Eating wood is a way of life for creatures such as termites, bark beetles, and certain mollusks including the infamous shipworms. A few invertebrates make at least some of the enzymes needed to digest cellulose and other complex polysaccharides of plant tissue, but no vertebrate can, thus these need bacteria for this purpose. But even most of the invertebrates require bacteria for this job. Consider termites, whose gut is a veritable microbial Club Med, where bacteria, archaea, and protists furiously metabolize wood particles while interacting and communicating with one another. Until now, it was thought that this microbial business takes place only in the digestive tract. But here comes a surprise. 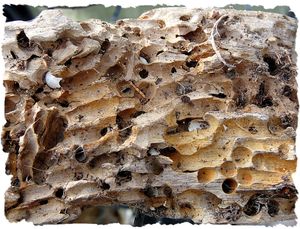 While the practice of localizing the microbes to the gut works well for most wood eaters, it is not the way shipworms do it. But first, who are the shipworms? They are worm-shaped mollusks — naked clams, really — that nibble a way at submerged wood to the detriment of, for instance, the old wooden ships that got literally eaten away. No small things, these voracious eaters. They are often several centimeters in length, but some are over a meter long. In the old days, the only protection we had against them was to clad hulls or marine piers with copper sheets. Humans do take some revenge: in parts of Asia, shipworms are eaten cooked, raw, or marinated (shipworm ceviche?).

How do shipworms wreak their havoc? They have tiny teeth on their shells, which are located on their front end and areused to grind away the wood into small pieces. The triturated fragments are ingested and eventually passed to the cecum, where they are digested. No wonder these creatures have been called the "termites of the sea."

Where are the workers? So far, this sounds conventional, but there is a mystery lurking inside the shipworms. Their cecum is almost free of bacteria, unlike the microbial zoo present in other cecum-endowed animals (i.e., in most amniotes). So, how can wood be digested there? This had been an enigma until a most unexpected answer was recently provided in a paper by Distel, Haygood, and collaborators: the bacteria that make the enzymes that decompose the wood reside not in the intestine, but in the animal’s gills!

At a first glance, you may think that nowhere else in animal physiology can you find such an arrangement. But in actuality, our small intestine carries only a small load of bacteria, yet is the place where most of our food is digested. And as with the shipworm, many, though not all, of the digestive enzymes are made elsewhere, namely in the pancreas. The analogy goes only so far: both are sites of digestion that house only a sparse microbiome. It is the shipworms' location of the enzyme-producing bacteria in a distant site, the gills, that seems to be unique in Biology.

In the gills, the bacteria reside intracellularly in bacteriocytes, just like insect symbionts do. The gill microbiome is made up almost entirelyof four cultivable strains of a clade that includes relatives of a previously studied gammaproteobacterium, Teredinibacter turnerae. These bacteria are aerobic as well as cellulolytic and one is a nitrogen-fixer able to provide the host with both carbon and nitrogen compounds. These organisms encode for a couple of hundred enzymes that contribute to the digestion of the cellulose-type components of the wood (not lignin, which is apparently excreted undigested). These enzymes, a delight to biopolymer enzymologists, include glycoside hydrolases, carbohydrate esterases, and some with carbohydrate-binding modules

Migrant workers. Proteomic analysis of the gills came up with the expected panoply of proteins involved in all aspects of bacterial metabolism, only 11% of which were in a group known to degrade plant cell wall polysaccharides (PCWPs). But analyze the cecum and you come up with the surprising finding that it contains practically only those enzymes active on PCWPs. In fact, these comprise 41 out of 42 detectable proteins in the cecum's lumen. The authors purified some of them and showed that they were active against a number of complex polysaccharides, including cellulose, hemicelluloses, and others found in wood. The simple conclusion is that these enzymes are involved in the degradation of wood in the cecum.

Several questions arise immediately: how do these bacterial enzymes travel from the gills to the cecum? The authors mention a duct going from the gills to the esophagus, which may be the conduit through which the enzymes travel, but this is just one possibility. So, how come these are the only proteins in the cecum? Perhaps they are the only ones that are secreted by the bacteria, thus the only ones that could migrate to the cecum. This is one way to purify a whole class of enzymes! Granted, the cecum also contains fragments of wood in different stages of digestion, but these apparently carry small amounts of proteins, if any. 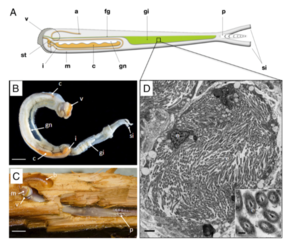 Figure 3. Endosymbiont-encoded proteins in the gills and cecum content of B. setacea. PCWP-active proteins comprise 98% of the cecum proteome, whereas the gill proteome is functionally diverse, suggesting selective transport of proteins from gill to gut (arrow). All endosymbiont-encoded PCWP-active proteins detected in the gill proteome were also detected in the cecum proteome. Functional categories (COG) are explained in the text of the paper. Source

How come the cecum houses only a few bacteria (the technical term is "depauperate")? Is it because there are antimicrobial compounds present that deter colonization? Could be. At least one such compound is known to be made by the endosymbionts in the gills, although its in vivo function remains to be determined. There is also a siderophore involved in the story, so perhaps keeping iron in short supply helps to limit the bacterial load.

A Most Curious Arrangement. Above all, why is it advantageous to carry these bacteria in the gills instead of the intestine? What's with this strategy? The authors write: "…..by virtue of their aerobic metabolism, the shipworm gill bacteria may consume less carbohydrate per unit of digestive enzymes produced than would typical gut anaerobes. Furthermore, the placement of these bacteria away from the gut content may allow the host greater control over the products of wood digestion, as well as their downstream transformations and fluxes." I wrote to one of the lead authors, Margo Haygood, and asked her: "While you are having a beer, can you come up with other reasons for this phenomenon?" She replied: "I think it is all about maximizing the benefit from the symbionts while minimizing the cost. The host can keep the symbionts well under its thumb as intracellular symbionts in the gill."

It's not often that a strategy adopted by the vast majority of animals gets turned upside down. Of course such surprises are not unheard of in biology, where evolution has explored almost every way of transacting its business. This reversal of a basic tenet is stunning, but who knows what will be the next quirk to come along and shake up yet another of our cherished beliefs.

This topic was discussed in the podcast This Week in Microbiology, episode 97.  (Link "TWiM #97: There’s gold in them hills".)