We posted Talmudic Questions #118 and #119 together because they struck us as being inter-related, both sending our thoughts down similar avenues. 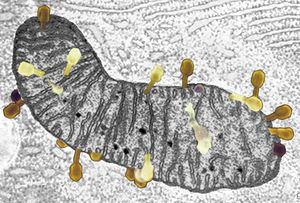 Are there bacteriophages known to infect eukaryotic cells?

Are there any phages known to attack mitochondria or chloroplasts?

Their appearance together on the blog prompted a lively conversation that we thought too interesting to leave buried out of sight. Moreover, we note that it is not too late to take part by posting a comment. You don't have to be an expert to contribute a comment here, or on any of our posts. We invite you to join in.

Do mitochondria have their own ribosomes?

1. Bacteriophages are usually very specific, so it is reasonable to believe that it wouldn't infect a eukaryote, outside a kingdom range. However, nature is full of exceptions. We may have surprises left.

2. I'm thinking why not? For example, In case of HIV, viral RNA have been found inside mitochondria. Herpes can directly induce mitochondrial degradation, but is not a prime requirement for replication. In case of Flock house virus, RNA replication occurs on outer mitochondrial membranes. Nodamura virus is another debated example (here and here). Given that mitochondria and chloroplast have their own genetic material still left (despite most of it being lost during evolution) makes the question valid to be explored to a degree.

I'm not sure, but on a related note I just learned from a friend that the bacterium Midichloria mitochondrii infects mitochondria. You probably already knew that, but how interesting!

Being an interested but naive reader (macro-biologist), I’m wondering if the phage-type RNA polymerases in plants are relevant? "In mono- and eudicotyledonous plants, a small nuclear gene family (RpoT, RNA polymerase of the T3/T7 type) encodes mitochondrial as well as chloroplast RNA polymerases homologous to the T-odd bacteriophage enzymes." (Source). I don't know if there's a generally accepted hypothesis as to origin, but in searching I found this: "Together these two findings add weight to the hypothesis of a podoviral origin of nuclear encoded phage type RNA polymerases. Considering a subsequent gene transfer from mitochondria to the nucleus, a prophage that might have been part of the α-proteobacterial endosymbiont's genome or an active podoviral phage, present in the α-proteobacterial ancestor of mitochondria at the time of the endosymbiotic uptake, is therefore a likely source for nuclear encoded phage-type RNA polymerases." p 28 of http://edoc.hu-berlin.de/disse...
In any case … in almost total ignorance I'm betting that somewhere there are phages involved with mitochondria and chloroplasts. With all the cool new things being found, it would have to be! :-) Thanks for the great TQs.

Fernando Vargas, Neeraja Vegesna, and myself (Kanika) presented these questions in our Microbiology class at UCSD. This is a compilation of our opinions. Waiting for a good discussion on these points!

To understand why bacteriophages don't infect eukaryotic cells, let us first look at how phages and viruses infect bacteria bacterial and eukaryotic cells. Phages enter bacterial cells by binding to a surface receptor (lipopolysaccharide, cell wall/flagellar proteins, and pilus proteins) and injecting its genetic material using its tail. The genetic material then gets integrated into the bacterial chromosome where it hijacks the cell to aid in its replication.

Virus particles enter eukaryotic cells using mechanisms like pinocytosis, receptor mediated endocytosis (via clathrin/claveolin mediated pathways) and/or membrane fusion where it is decapsidated inside the cell and end up in the lytic or lysogenic cycles.

Perhaps there are many reasons as to why bacteriophages cannot infect eukaryotic cells. One can argue that they are incapable of infecting eukaryotic cells because phages don't have the required ligands for a receptor mediated endocytosis like infection. Furthermore, even if they are somehow recognized by and incorporated into the cell, they may need to undergo decapsidation, which is not known in phages, for effective infection.

So, if we were to do an experiment to verify whether an unknown phage can infect a eukaryotic cell, we can proceed with the classic "Hershey-Chase" experiment. Bacteria will be cultured in media supplemented with phosphorous isotope (32P) for around four hours before phage introduction. It is expected that the phage progeny will contain radioactive isotopes in their structures. The labelled progeny will then be used to infect eukaryotic cells, followed by the extraction of bacterial genomic DNA. The genomic DNA will then be run on a gel while probing for 32P-incorporated genomic DNA. If the phage has indeed infected the eukaryotic cell, we would expect to see a band under the conditions mentioned. A follow up experiment to investigate if phages can infect mitochondria or chloroplast would follow a similar strategy except that we fractionate the cells and extract the genomic DNA found in mitochondria and chloroplast separately from the nucleus and check for the presence of 32P-labeled phage DNA separately in each of these.

A study was conducted by Poul and Marks, wherein the authors re-engineered F5 phage (displaying an antibody) to infect eukaryotic cells by binding to mammalian growth factor receptors, undergoing receptor-mediated endocytosis and resulted in expression of a reporter gene (GFP) inserted into the bacteriophage genome. Now this is something completely novel although we wonder whether GFP expression is due to infection or an artifact of endocytosis, the authors don't perform many experiments to verify this. But still it will be interesting to go ahead and explore more on this as it can has several applications like gene delivery etc.

Recently, researchers have discovered unusual similarities within the RNA polymerases found in mitochondria, chloroplasts and of T7 phage. Perhaps, phages infected ancestral bacteria that more closely resembled mitochondria and/or chloroplasts which was being incorporated into eukaryotic cells. Perhaps during this endocytosis event, a phage made its entry into the cell and donated its DNA code for the RNA polymerase enzyme, resulting in the observed similarity. Were this the case, it may be possible for phages to infect eukaryotic cells in indirect ways, possibly by infecting a bacteria with phages and use that infected bacterial cell to infect the eukaryotic cell.

So, all in all there may be different ways in which phages may indirectly infect eukaryotes. May be they infect bacteria first which then go on to infect the eukaryotic cells or under some circumstances, phage particles lyse and just bits and pieces of DNA or protein goes into the eukaryotic cell by pinocytosis which may not have any dire consequences. Alternatively, when the eukaryotic cell is undergoing endocytosis, some phages or phage particles present in the vicinity (a by-chance event!) may get into the cell. It is unheard of, but definitely probable.