"I'm just crackers about cheese, Gromit!"
— Wallace, in The Curse of the Were-Rabbit 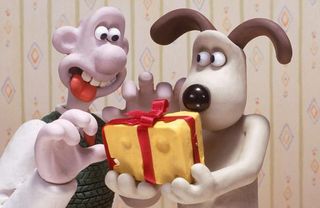 Like Nick Parks' Aardman claymation characters (Figure 1), I have an insatiable fondness for cheese. Yes, the preparation of this post involved heavenly pungent dreams of Tarte au Maroilles and several trips to the cheesemonger’s counter. Gazing at the smear-ripened gooey perfection of Époisses de Bourgogne and the staggering price for this import, I appreciated the power that this microbial product can have over someone.

The Microbial Mysteries of Cheese So Wondrous, So Varied

Despite being a microbiologist, I knew relatively little about how humans and microbes worked together to turn relatively simple milk into a tremendous variety of unique cheese products. Microbiology education and research largely focuses on applications within the realm of human pathogenesis, particularly in a medical school-associated department. Given the close historical ties between medicine and microbiology it isn't surprising that until recently relatively little has been done to look into the biology of benign or beneficial microbial interactions, like cheese-making. 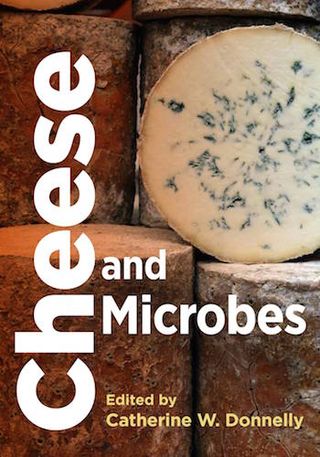 Well established centuries prior to discovery of the unseen universe of life, cheese production seems perhaps closer to an art than to a science — look no further than that descriptor 'artisanal'. A two-part Microbe article by Paul S. Kindstedt shedding some light on the microbiology of cheese first caught my eye awhile back (see here and here). Now an entire book of cheese-related microbiology reviews awaits the curious with the publication by ASM Press of Cheese and Microbes (Figure 2), edited by Catherine Donnelly. Nicely summarizing both what scientists do know and what still remains unclear about the microbiology of cheese, it includes contents that will appeal both to specialists and also to any interested general readers.

Editor Donnelly opens the collection with a brief historical overview of cheese and the microbes involved in its production and Kindstedt follows this with a chapter covering the general processes of cheese making that covers the basic chemistry of milk and the techniques for each common step of its transformation into cheese including coagulation, maintenance of pH, moisture, and salt levels, control of environmental temperature/humidity, physical manipulation, and ripening/maturation. These opening chapters, together with the final ones, form easily readable bookends of with broad appeal and provide excellent resources for someone curious about the food they eat.

The Taxonomy of Cheese 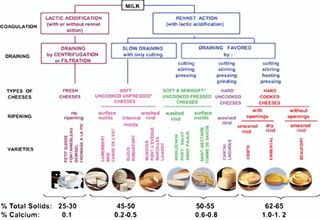 (click to enlarge) Figure 3. Classifications of French cheese according to production technique and physical properties of the final product, by Lenoir et al. (1985) Biofutur, adapted by Almena-Aliste and Mietton for Cheese and Microbes. Source

Tied to the precise method used for their production, cheeses are typically classified according to their outward qualities and appearance, much as life was pre-Woese. After its introductory chapters, Cheese and Microbes provides an overview of global cheese classifications (Figure 3, for example) and a discussion of the varied types of microbial cultures used in cheese making according to temperatures used during production. A series of chapters follow that feature specific types of cheese, their associated microbes, and particulars of their production according to geographic region/class. These chapters are written in a more dry fashion, with summaries of regional cheese varieties and more esoteric details. For a general reader, these reviews will likely be of less interest, but the chapter on mold-ripened cheeses by Marcelliono and Benson bears special mention for its inclusion of historical details beyond the straight-up taxonomic science. The unique readability and fascinating points (such as on the etymology of the word cheese) of this chapter — that nonetheless is on a very focused topic — may stem from Mother Marcelliono being both a microbiologist and a Benedictine Nun from the Abbey of Regina Laudis in Bethlehem, CT.

Cheese as a Model for Microbiological Ecosystem Research

Cheese and Microbes ends with another two chapters of broader appeal. D'Amico's "Microbiological Quality and Safety Issues in Cheesemaking" has relevance with recent regulatory uncertainties when it came to using traditional wooden implements during cheese making, a process covered in one of the middle chapters in this collection. The FDA has backed off on earlier statements regarding potential health risks that could be associated with porous, wooden tools that may be difficult to clean. However, safety matters in cheese production, from the presence of potentially harmful microbes to the protection of the good microbes from bacteriophage infection are still important considerations. 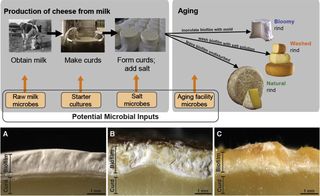 Wolfe and Dutton then close the book with an intriguing chapter on using cheese as a research model for studying the biology of microbial communities (Figure 4). For a microbiologist this chapter really leaves readers wanting more, excited by the research possibilities that exist for understanding not only more about the cheese we've long enjoyed, but also about biologically relevant microbial interactions. This review of possibilities is a perfect introduction to a recent publication from the Dutton lab (with Wolfe as lead author) in Cell where they lay the experimental foundations for using cheese rind as a tractable system for studying microbial community interactions and diversity (Figure 5).

Using PCR-based amplicon sequencing, Wolfe et al. characterized the microbial diversity of 137 cheese varieties from across the US and Europe. From these samples only 14 bacterial and 10 fungal genera were found at higher than 1% average abundance, and that the majority of both bacteria (60%) and many of the fungi (25%) were not introduced from starter cultures, but rather originated from the environment. Hence, despite sampling from a broad geographical range and regional production techniques, the dominant microbial genera in these varied cheeses are not apparently determined by physical (geographic) origin, but by environmental factors and species interactions. The variety in microbial composition from one cheese to another correlated particularly well with moisture content, highlighting the tremendous importance for control of the chemical environment during cheese making. 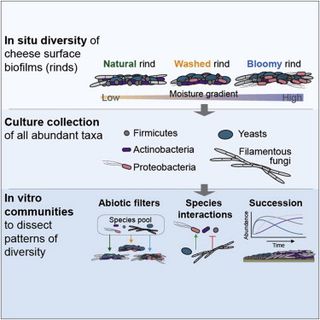 Figure 5. An ecosystem approach to cheese microbiology. Multispecies microbial communities making up natural cheese rinds can be characterized in situ by metagenomics. Environmental difference during cheese production produce particular kinds of rind with distinct communities of interacting species that develop over the time course of cheese maturation. Recapitulation of these communities in vitro permits tractable experimental study of microbial dynamics involved in cheesemaking. Source

Further metagenomic analysis of the microbial cheese rind communities uncovered genes with putative functions in cheese development that are encoded in species of environmental origin. While many of these genes were expected (known metabolic genes involved in flavor production in washed rind cheeses for instance), others were unexpected. For example, discovery of widespread and highly abundant marine-associated Gammmaproteobacteria revealed genes for cold-adapted enzymes that may be important for maturation of cheeses aged and stored in chillier environments, like the Alps.

The real promise of the work by Wolfe et al. is in the first steps they take to show that cheese rind microbial communities are experimentally tractable. At least one isolate from each of the 24 dominant genera determined by amplicon sequencing proved culturable and the communities could be roughly reconstituted and observed in vitro. Using reconstructed microbial communities the authors were able to confirm that environmental, abiotic manipulations (different rind treatments) were instrumental in establishing distinct communities that display evidence of composition-altering species interactions, including between bacteria and fungi. Importantly, reconstituted rind microbial communities displayed temporal dynamics of composition that were reproducible and roughly comparable to those observed in situ.

Prospects for a Cheesey Future

Though not a system that perfectly models what they observed in situ (qualitative differences in community composition and species interaction/temporal succession do exist), this work does set up a potential to easily perform significant and relevant studies in the lab on the scope and mechanisms of microbial interactions. Wolfe et al. point out that despite the domesticated nature of a cheese rind community, the species found present together in them strongly resemble the composition of environmentally 'natural' communities, such as on a cow's teat.

For me, regardless if these communities are 'unnatural', 'domesticated', or not, cheese is too important and wonderful to not want to understand more deeply. For all the rest of you cheese aficionados out there, check out Cheese and Microbes for more information, and keep an eye out for novel scientific insights, such as from the Dutton lab, into the microbial communities that make all the deliciousness possible.