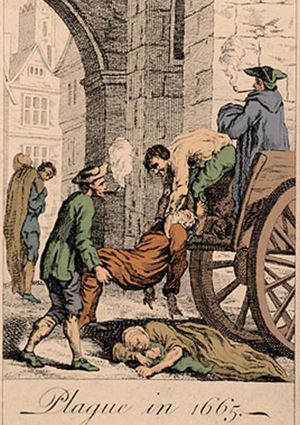 A bit of history.  The enterobacterium Yersinia pestis, the causative agent of the plague, was responsible for many terrifying outbreaks over the course of recorded history, but the most devastating pandemic was known as the Black Death. Occurring between the years 1347 and 1351, it is estimated that it claimed about one-third of Europe’s population, half of that of China, and one-eighth of Africa's. This dreaded disease can develop in three distinct forms, depending upon the major site of infection: bubonic plague (lymph nodes), septicemic plague (blood vessels) and pneumonic plague (lungs). Plague is primarily transmitted by the bite of fleas that have fed on infected animals, especially rodents.

Y. pestis was first isolated in 1894 by the French-Swiss bacteriologist Alexandre Yersin, who humbly named it 'Pasteurella pestis'. It was reassigned to its current Yersinia notation in 1967. In the genus Yersinia, there are two additional species that are pathogenic in humans: Yersinia pseudotuberculosis and Yersinia enterocolitica. Both cause relatively mild food- and water-borne enteric diseases that are transmitted via the fecal-oral route. Y. enterocolitica and Y. pseudotuberculosis diverged between 41 and 186 million years ago, whereas Y. pestis evolved from Y. pseudotuberculosis only within the last 1,500 to 6,400 years, making it a relative newcomer on the evolutionary stage. For a paleomicrobiological discussion of the plague in this blog, see here. So what changed in that relatively short timespan to allow Y. pestis to become the infamous, flea-exploiting superpathogen we've come to know and dread?

Fleas and Yersinia pestis.  Consider its mechanism of spread. When a flea dines on Y. pestis-tainted blood, the bacteria form a biofilm in the gut of the flea, blocking digestion and leaving the flea constipated and hungry. When the flea then bites another host, bacteria break loose from the biofilm and enter the new host. By contrast, when fleas ingest blood tainted with Y. pseudotuberculosis, the bacteria produce a protein that is toxic to them and kills ~40% of the unlucky partakers. The loss of this toxic protein in Y. pestis allowed it to exploit a vector-borne route of transmission that remains unavailable to Y. pseudotuberculosis. However, little is known about the toxic agent other than it is a non-secreted protein that is active in the flea digestive tract. Now Chouikha and Hinnebusch identified this protein, filling in an important piece of the plague puzzle. 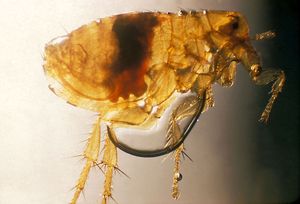 How come Y. pestis is so flea-friendly?  In order to identify the toxic protein, they carried out a little taste test with fleas known to be sensitive to the toxin. They divided the fleas into groups and fed them cellular fractions from Y. pseudotuberculosis enriched for membrane, cytoplasmic, or periplasmic proteins. Fleas fed on blood meals containing the periplasmic or cytoplasmic fractions were unaffected, while those fed on the membrane fraction showed more signs of toxicity than unlucky guests at a cruiseship buffet. They further separated the membrane fractions by low-speed centrifugation into supernatant (MS) and pellet (MP) fractions.  Blood meals containing the MS fraction were very toxic to fleas, whereas those containing the MP fraction were nontoxic, indicating that their mystery toxin is a partially soluble, membrane-associated protein.

The authors then used two-dimensional gel electrophoresis to separate the mixes of proteins in MS fractions, comparing those derived from Y. pseudotuberculosis with those from Y. pestis. Of nineteen proteins specific to the toxic Y. pseudotuberculosis MS fraction, four are components of a multimeric urease complex encoded by the ureABCEFGD operon. Intriguingly, the ureD homolog in Y. pestis has a frameshift mutation that introduces a premature stop codon, thus rendering Y. pestis strains incapable of degrading urease, whereas Y. pseudotuberculosis is urease-positive and thus able to degrade urea. Could silencing urease have been the modus operandi that enabled fleas to become highly successful vectors for transmitting the plague?

Approaching the subject from another angle, if just the mutation that prevents Y. pestis from hydrolyzing urea were fixed, would Y. pestis then be toxic to the fleas, as well?  Insertion of a single guanine residue in the ureD gene is responsible for shifting the reading frame and removes the offending residue. As expected, the "fixed" bug was able to hydrolyze urea, and caused greater mortality in fleas (more than 40%) than wild-type Y. pestis. Thus, the reactivation of urease in Y. pestis restores its ancestral toxicity to fleas. It turns out that the urease doesn't even have to be from Yersinia. Adding purified jack bean urease works as well and treatment with an urease inhibitor removed the toxicity. Which demonstrates that, whatever the source, the urease must be enzymatically active in order to kill the fleas.

Figure 4. Toxicity to fleas is dependent on urease enzymatic activity. A Mortality of fleas that fed on blood containing Y. pseudotuberculosis cell lysate (CL) or JBU with or without the urease inhibitor p-Bq. Control fleas were fed on blood containing PBS buffer and p-Bq. Data are means ± SD of two independent experiments. B Inhibition of urease enzymatic activity by p-Bq in the samples added to the flea blood meals was verified by using a quantitative urease assay. Source

Loss of Function, Gain of Virulence.  The loss of urease activity allowed Y. pestis to access a very efficient vector, but did this advantage come with a fitness tradeoff? Are there negative effects of urease loss in terms of the ability of Y. pestis to survive in the flea gut and spread efficiently? Apparently not. In fleas fed on either the urease-negative wild-type Y. pestis or an urease-positive mutant, the average infection rate and bacterial load were similar for both strains, indicating that the advantage gained due to loss of urease in Y. pestis did not require a tradeoff. A sweet deal for Y. pestis, indeed.

The elimination of urease activity prevented the poisoning — likely by ammonia production — of fleas, allowing Y. pestis, in contrast to its progenitor Y. pseudotuberculosis, to use fleas as vectors for transmission of the plague. This joint venture was highly successful and probably underwent Darwinian positive selection.  The extent of the advantage gained is highlighted by the fact that the mutated ureD allele is found in all Y. pestis strains tested worldwide. This is noteworthy since a mutation by the insertion of a single nucleotide in a homopolymeric run via slipped strand mispairing has a high reversion rate. Such Y. pestis revertants have apparently been eliminated from the population due to a fitness disadvantage. It is no wonder, therefore, that in the pre-antibiotic era Y. pestis evolved as a superpathogen claiming more lives than any other infectious agent in the annals of microbial pathogenesis. And all this because of the loss of one single gene function!