The venerable Polinton family  The line between viruses and parasitic elements of the genome is thin and delicate, and probably often crossed. Parasitic elements that acquire the means to escape the host cell become viruses and, conversely, viruses can lose this ability and return to a more limited lifestyle as transposable elements (TEs). This back-and-forth occurs alongside a propensity for gene exchange, with genes acquired horizontally from various hosts, and at various periods of evolution. 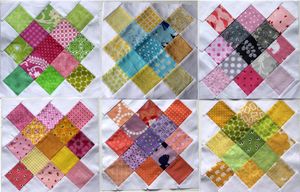 The result is that, although viruses and other "selfish" elements are obviously related, their relationship cannot be represented by the satisfying, graceful branches seen on phylogenetic trees depicting the evolution of more pedestrian organisms such as primates, for example. Instead, a virus or TE is like a quilt whose patches were added by different quilters, at different times. Despite these complications, Krupovic and Koonin demonstrate that the task of determining relationships is not entirely hopeless, as a few patches of the quilts are shared among so many elements that they can be traced back quite far, and so can delineate tree-like, vertical relationships. Occupying a central position in their reconstruction of virus history are the so-called Polintons (aka Mavericks) — TEs whose quilt is an intriguing patchwork of virus-like and transposon-like genes.

Polintons are large DNA transposons, typically 15 − 25 kb in length, encoding up to ten proteins. Among these are a polymerase and a retroviral integrase from which the name 'Polinton' is derived. They are widespread among eukaryotic genomes: So far, more than seventy Polintons have been found across an evolutionary gamut of at least 28 eukaryotes, from fungi and trichomonads, to frogs, crocodiles, and insects. Phylogenetic analyses support seven distinct lineages that largely mirror the tree of life, indicating evolutionary roots that extend back more than a billion years, placing Polintons on the scene of the very origins of eukaryotes.

What makes the family history of Polintons particularly interesting are their multiple links to a varied and illustrious set of cousins, whose hosts span the three domains of life. That is, if you look at all the patches (genes and gene blocks) that are shared among Polintons and various mobile elements from archaea, bacteria, and eukaryotes, it is Polintons that form the hub, sharing the most gene homologs with the other groups. Remarkably, the groups related to Polintons include elements with very different lifestyles — linear plasmids, bacteriophages, viruses, and virophages. In order to appreciate the intriguing position Polintons inhabit on the TE "quilt of life", let's turn to the actual patches that they share with other viruses and TEs.

A patchwork quilt  Virus "hallmark" genes give viruses their identity, and encode proteins involved in replication and the generation of virions (virus particles). Since homologs of such genes are shared among a wide range of viruses, they are especially useful for defining deep evolutionary relationships. Polintons share four important hallmark genes with two very different groups of mobile elements: bacteriophages known as tectiviruses, and the Mavirus virophage/satellite virus. Two of these genes encode capsid proteins,used to build the icosahedron that encases the DNA genome of many dsDNA viruses during their infectious forays. Their spaceship, if you will. The so-called major capsid protein (MCP) of Polintons is predicted to form the tasty-sounding double jelly-roll (DJR) fold found among an incredibly diverse set of viruses, from all three domains of life. Specifically, the MCP of Polintons is most closely related to that of phycodnaviruses, which infect algae and are members of the proposed new order of giant dsDNA viruses, Megavirales. 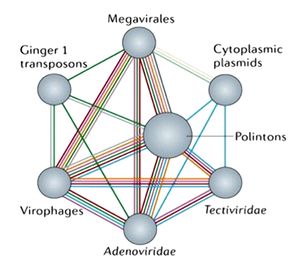 Polintons also encode minor capsid proteins (mCP) known as penton proteins, so named because they form the fivefold vertices of the viral icosahedron. Penton proteins are a feature of all viruses that encode MCPs of the DJR type. The researchers found putative penton protein homologs in Megavirales, adding support to the evolutionary relationship between the giant DNA viruses and Polintons. So already we see Polintons linking bacteriophages, Megavirales, and a virus that parasitizes Megavirales (Mavirus).

Furthering the link between Polintons, Megavirales, and Mavirus, and extending it to some dsDNA viruses of eukaryotes (adenoviruses) are two additional proteins encoded by Polintons: a cysteine protease and an ATPase. During capsid assembly, cysteine proteases often cleave the assembled MCPs as part of the capsid maturation process, leading to the mature, infectious form. They are widely distributed among both small and large eukaryotic viruses that carry DJR MCPs, suggesting their acquisition at the very dawn of the evolution of eukaryotic viruses. The cysteine protease encoded by Polintons is homologous to that of most Megavirales, Mavirus, and adenoviruses.

ATPases are required to pump the viral genome into the virions. Exhibiting a remarkable level of conservation, almost all known viruses with icosahedral capsids constructed from DJR MCPs use ATPases from a particular family, and most Polintons are no exception. Adenoviruses, in contrast, encode a distinct type of ATPase, seeming to move them away from the Polinton fold. However, as it turns out, a few Polinton lineages actually use the type more similar to that of adenoviruses, which suggests that ATPases diversified in Polintons, and that adenoviruses acquired their ATPase from a distinct Polinton lineage. 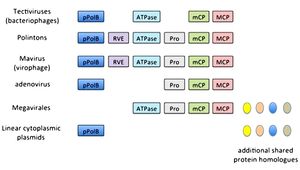 The replication enzyme of Polintons is pPolB, which is a protein-primed DNA polymerase. For elements that use pPolB, replication is primed not by nucleotides but by a protein that is covalently attached to the 5' end of the genome. This particular "patch" must have deep evolutionary roots, since pPolB is shared among a diverse group of eukaryotic viruses, linear plasmids, and phages. To see how these sequences are related, researchers aligned pPolB gene sequences from elements from all three host domains to generate a phylogenetic tree. Overall, pPolB genes divide into two major clusters — those from elements with bacterial and archaeal hosts, and those with eukaryotic hosts. The eukaryotic cluster is further divided between elements that replicate in mitochondria of fungi and plants, and viruses of eukaryotes (including some linear plasmids of yeast). This latter group includes Polintons and, interestingly, they occupy the deepest branches, implying that the eukaryotic viruses that use protein priming emerged from the Polintons.

Hypothesis  Stitching together a story from the various shared patches, Krupovic and Koonin devise a hypothesis for the origin of Polintons and their role in the evolution of various TEs. (Warning: we are now entering the boggy terrain of speculation. Tread with caution!) The protagonist of the first chapter of the tale is well known. It is the bacterial endosymbiont that was taken up by a primitive eukaryotic cell and gave rise to the mitochondria — the little cytoplasmic energy factories we all carry in our cells. Based on the four shared hallmark genes between Polintons and the tectiviruses (which, remember, are bacteriophages), they hypothesize that this endosymbiont may have brought along a passenger — a primitive tectivirus — that gave rise to Polintons. Polintons are distinguished from tectiviruses, however, by the presence of genes for a cysteine protease and an integrase. As some DNA transposons house these genes, such a transposon could have "donated" them to an ancestral Polinton via a recombination event. 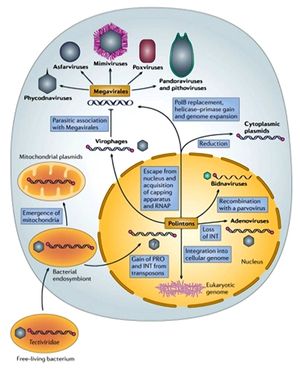 Figure 4. A hypothetical scenario for the evolution of various eukaryotic viruses and plasmids. The hexagons represent icosahedral capsids; in the case of Polintons, the capsids have been predicted to exist but have not yet been observed (indicated by a question mark). Double strands represent double-stranded DNA, whereas the single-stranded DNA genome of bidnaviruses is shown as a single strand. INT, retroviral-like (RVE) family integrase; PRO, adenovirus-type cysteine protease. Source

The protease acquired by the Polinton would have been reshaped by adaptation for its role in virus maturation, and retained in the various viral lineages that emerged from Polintons, such as virophages, adenoviruses, and Megavirales (some of whose members subsequently lost the gene). The acquired integrase, which mediates insertion into the host genome, would then have provided the ancestral Polinton with two options: a largely sedentary lifestyle within the host genome; or a virus-like, freewheeling lifestyle. These options may be reflected in the Polinton ancestors of Trichomonas vaginalis and those of adenoviruses. In the first case, the integrase-bearing ancestor found great success in the sedentary lifestyle, managing to expand to comprise ~30% of the T. vaginalis genome, and giving up their spaceship (the capsid) altogether. Adenovirus ancestors, by contrast, lost the integrase gene and in so doing took up a life of travel and adventure as viruses.

As for the role of Polintons in the evolution of the giant dsDNA viruses, the Polinton ancestor would first have had to escape from the nucleus and adjust to life in the cytoplasm. No longer able to rely on the host polymerase for transcription, the escaped element had to acquire an RNA polymerase (RNAP), as well as an mRNA-capping enzyme. Thus were born the cytoplasmic plasmids of eukaryotes. However, cytoplasmic plasmids replicate with pPolB, which primes from only one site (the 5’end) — this could be problematic for the longer genomes of Megavirales. The workaround? Primase-helicases enable the use of multiple internal primers, in turn allowing longer genomes to be replicated. Megavirales encode primase-helicases that are homologous to those found in several Polintons. The idea is that acquisition of a Polinton primase-helicase allowed Megavirales to expand their genomes, adding genes left and right from various sources — bacterial and eukaryotic alike — and eventually reaching their gargantuan genome sizes.

In conclusion, Polintons occupy a unique, central position in the patchwork quilt world of viruses and TEs. Perhaps most remarkably, they serve as a link between the tectiviruses of archaea and bacteria on the one hand, and dsDNA viruses of eukaryotes on the other. Furthermore, their contribution to the evolution of a variety of eukaryotic viruses and TEs spanning an incredible range of sizes and lifestyles surely earns them the title Krupovic and Koonin bestow upon them: "a hotbed of virus evolution."