The Attraction of Magnetotactic Bacteria 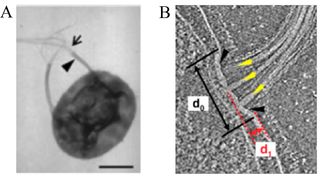 Figure 1. (A) Transmission electron micrograph of uranyl-stained MO-1 cell with its sheathed flagellar bundles (arrowhead) along the long hemisphere of the cell. Arrow shows individual flagella at the cell distal end of the sheath. Scale bar = 500 nm. Adapted from: source. (B) Slice from a cryo-electron tomogram showing a side view of an intact flagellar apparatus on the cell envelope of a vitrified MO-1 cell. Black arrowheads show where the sheath attaches to the base platform, which has a diameter (d0) of 230 nm and a depth (d1) of 46 nm. Yellow arrowheads show three visible individual flagella in the sheathed bundle in this slice, of the seven total flagella. Adapted from: source

Regular readers of Small Things Considered may recall our mention of the magnetotactic bacteria, organisms that can sense the Earth's magnetic field to orient themselves and distinguish up from down. The magnetotactic bacteria vary greatly in morphology, metabolism, and phylogeny, but they all share a little tool that permits the magnetic sensing underlying their coordinated movement (magnetotaxis). This tool, the magnetosome (also discussed here in an earlier post) consists of magnetic mineral inclusions bounded by a lipid bilayer.

As Elio stated in his earlier post: "The actual merit in being magnetic has not yet been settled definitively. It has been proposed that these bacteria swim along the magnetic field lines to reach the lower strata of the marine sediment. That's where the oxygen concentration is very low, something they may like."

A recent report in Environmental Microbiology begins to look closer into the advantages of magnetotaxis for a strain called MO-1, an isolate from the Mediterranean Sea that represents a potentially novel genus of Proteobacteria and is phylogenetically related to Magnetococcus strains. MO-1 has an ovoid morphology with two sheathed, flagellar bundles on its long-axis side (Figure 1A), that impart strong force generation to achieve MO-1 speeds up to 300 µm/sec (~100 body-lengths/second), about ten-fold faster than the average marine species of bacteria. It resembles in looks a non-magnetotactic fast swimmer, Ovobacter propellens, discussed in these pages.

Encasing a Flock of Flagella:

Figure 2: (A) Negatively stained electron micrograph of a base platform treated in a basic (pH 11) solution showing an intertwined hexagonal array (with cartoon overlay on right) of the basal bodies of seven flagella (orange in cartoon) and twenty-four fibrils (green in cartoon). Scale bar = 50 nm. Adapted from source. (B) Diagram from 1957 depicting a similar, then newly visualized, double hexagonal array of filaments (now known to be actin and myosin) in cross-striated muscle. Adapted from: source

As revealed by genetic analysis and cryo-electron microscopy, these flagellar bundles of MO-1 make up some amazing structures (Figure 1B). Each bundle consists of seven flagella with twenty-four interspersed fibrils (Figure 2A) that are arranged and move against one another in a manner that resembles the thick and thin filaments of vertebrate skeletal muscle (Figure 2B). Possibly made from up to twelve different glycosylated flagellin proteins encoded by MO-1 (the highest known number of different flagellins in a single bacterium), the flagella and fibrils are bundled together within a sheath. This arrangement creates a nearly ten-fold increase in the force of the flagellar beat as a bundle, compared to single, separated flagella. 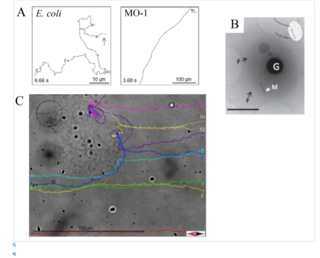 Figure 3: (A) Swimming trajectories of E. coli and MO-. Note the different time frames and scale bars. (B) Slice from a cryo-electron micrograph showing flagella, F, and the magnetosome, M, illustrated in top right corner, highlighting that the magnetosome appears often perpendicular to the axis of movement. Scale bar = 1 um. (C) Swimming behavior of MO-1 cells in phase microscopy when encountering an agarose obstacle (cloudy region) in the presence of a magnetic field. The paths of multiple cells are tracked in unique colors over a period of 5.66 seconds. Bacteria are swimming northward (from right to left). Adapted from: source

The Benefits of a Magnetic Personality:

So, why does MO-1 make this specially evolved flagellar structure for its magnetotaxis? Where is it racing to at such speeds, and just how important is the magnetosome in this regard? As the quote above suggests, MO-1 and related bacteria reside in the first top centimeters of marine sediment, within the oxic/anoxic interface (OAI) where oxygen is present at low concentrations. The working model is that magnetosomes allow cells to align with the magnetic field and swim into the OAI (either down from oxic environments through counter-clockwise flagellar rotation or up from anoxic environments through clockwise flagellar rotation). Once in the OAI sediment pockets, magnetotactic bacteria would still need to respond rapidly to the low nutrient conditions, which are in constant flux.

In their recent report, the lab that identified and researched MO-1 set out to further describe its magnetotactic behavior and characterize its importance for the bacteria. They found that in contrast to the way E. coli swims (which is marked by short 'runs' interrupted approximately once every half second by a direction-changing 'tumble'), MO-1 swims more or less straight for relatively long time periods (up to 17 seconds) with no change in direction (Figure 3A). Surprisingly, the researchers found that unlike other investigated cases, the magnetosome of MO-1 does not appear to align parallel to the bacteria's direction of movement, but rather are perpendicular to it (Figure 3B) The reason why the magnetosome of MO-1 does not perfectly align with magnetic field lines, yet the bacteria themselves do, remains unclear and highlights how little we know regarding magnetosome structure and function.

To simulate MO-1 movement within its native environment, the researchers applied a uniform magnetic field to cultures that contained 'obstacles' consisting of large agarose aggregates as a proxy for the granular nature of the sediment (Figure 3C). While some MO-1 cells squeezed through the agarose or became stuck, when many of the cells encountered the obstacle, they first turned away and then reversed direction against the magnetic field (antiparallel), and then turned to reverse direction again back onto their original course with only minimal alterations from the original linear path. 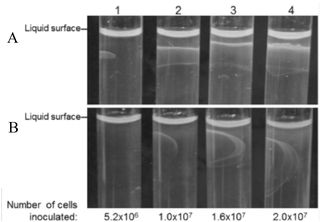 Figure 4: MO-1 inoculated with indicated cell numbers into oxygen-permeable plastic tubes with growth media. The tubes are then sealed and incubated for two days in the presence (A) or absence (B) of a geomagnetic field. The liquid meniscus is indicated (the dense white 'smile' at the top of each culture) and growth as a globule or double bands (upper more intense due to more north-swimming bacteria, presumably) in the presence of a magnetic field (A), but only as a low density swirl in the absence of a magnetic field (B). Adapted from: source

An especially exciting finding occurred when researchers compared MO-1 growth in the presence or absence of a magnetic field in a sharp gradient of oxygen concentration (oxycline). With a geomagnetic field available, MO-1 cells inoculated into oxygen-permeable plastic tubes initially form a roundish globule near the surface of the liquid and close to the side of the plastic tubes, following a gradual vertical oxygen gradient from the liquid surface and a sharp radiate gradient from the oxygen-diffusible plastic tube walls. At lowest inoculations, cells never reach a density high enough to alter this zone of growth, even after two days (Figure 4A1).

With higher inoculations, cell density increases enough cells to form a thick, dense band around the diameter (walls) of the tube. Eventually, after two days, use of oxygen by the bacteria for their respiration (presumably faster than the oxygen can diffuse in) leads to an altered redox potential where that initially formed band of dense growth has now formed a reduced environment, prompting the bacteria to swim northwards or southwards towards the two OAIs (above and below) to create two new bands of growth (Figure 4A2 – 4A4)

Remarkably, the presence of the magnetic field is vital for optimal MO-1 growth in the presence of these sharp oxygen (redox) gradients. Using a specially designed shielding device that dampens the magnetic field, the researchers found that even at relatively high inoculum densities MO-1 cells were unable to adjust to changing oxygen concentrations. Figure 4B2 – 4B4). In the absence of a magnetic field MO-1 cells formed, but persisted, as a round globule after two days, unable to achieve high cell densities by swimming efficiently into two new oxygen-rich environment bands. Strikingly, at the lowest cell density inoculum (Figure 4B1), the magnetic field proved essential for establishing any growth at all (checking up to four days).

Interestingly, MO-1 cells still appear to form magnetosomes in the absence of the magnetic field, they just don't use them to guide cell. To recap: in low-density conditions the magnetic field went from being optimal for MO-1 growth to becoming essential. This suggests that magnetotaxis may indeed have evolved to make use of the Earth's magnetic field to respond rapidly for movement to micro-zones with energy availability. The authors also speculate that, in addition, the rapid swimming of MO-1 may cause local convective oxygen currents that are more efficient than simple diffusion.

When it comes to magnetotactic bacteria in general and to MO-1 specifically, many questions certainly remain. Not much is known about how the magnetosome (in the presence of a magnetic field) integrates with the flagella, or how MO-1 is able to sense an obstacle, briefly reverse direction, and then resume its near-original path. Additionally it remains unclear how individual MO-1 cells manage to change swimming direction beyond the linear paths observed in this paper. Study of strains like MO-1 in specially created microfluidic devices and chambers and the development of a genetic system could pull these interesting bacteria to new poles of discovery.