« A Talmudic Conversation | Main | A Snippet: How Do Long Bacteria Snip Apart? »

Increasingly, it is becoming apparent that there is a deep difference between what happens in vivo and in vitro. The idea that one can comfortably extrapolate from the bench to, say, the bedside, is receding rapidly. Living things, not even the smallest ones, are no agar plates, however convenient and inexpensive these may be. Each field of Biology has to learn this lesson, not the least that of antibiotic research. Gone are the days when a laboratory result alone was thought to reveal what goes on in a person sick with a microbial infection. Where do such distinctions show up and why do they matter?

Recently, Dan Andersson and colleagues from Uppsala University Sweden, published a truly unique and important study on the many mechanisms of mecillinam (aka amdinocillin) resistance in Escherichia coli. Although several such studies have been performed in the past, what separates this work from those previously published is in providing an understanding of the genetic and environmental basis of an important drug resistance paradox of mecillinam, namely why is resistance to this β-lactam antibiotic so readily observed in the laboratory (i.e. on a petri dish) but rarely identified in a clinical setting where this drug is widely used to treat E. coli urinary tract infections? 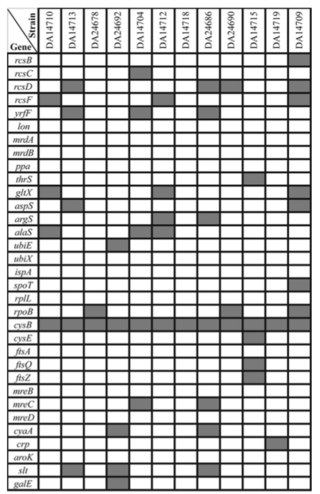 Figure 2: Putative Amd resistance-encoding genes in clinical strains. Genes marked by gray shading have a mutation that is not present in any of the reference genomes. Specific mutations are listed in Table 4 of the paper. Source

Indeed, resistance mutants arise in vitro at frequencies of 8x10–8 to 2x10–5 per cell, depending on the drug concentration used during selection, but at much lower rates in clinical isolates. The laboratory mutants involve many distinct functions and as many as 38 known genes, ranging from the drug target (pbpB) to yet other aspects of cell wall synthesis, cell division, respiration, ribosomes, tRNA synthetases, as well as the ppGpp-mediated stringent response pathway. Furthermore, based on whole genome sequencing and precise allelic replacement, each of these mutations has been rigorously demonstrated to be the cause for the observed drug resistance. All this diversity is quite interesting and the subject of much research, but it is not the point here. What is startling is that the rare mecillinam resistant E. coli clinical isolates are surprisingly different: all isolates carry only a single re-occurring class of mutations, the loss of function of cysB, a gene involved in cysteine biosynthesis. Just how does depletion of cysteine levels confer mecillinam resistance? This is not known, but the different drug resistance spectra under two growth conditions leads to insights into the paradoxical rate of drug resistance observed in vitro and in vivo.

The Andersson lab went on to demonstrate that whereas mutants selected in vitro all share similar fitness costs (again, assayed in an in vitro condition), the cysB mutations do not incur a fitness cost when the strains are grown in a more relevant urine-rich medium (btw, the urine was supplied by one of the investigators). These experiments demonstrate that among the broad set of mutations that can confer mecillinam resistance under the standard way of determining drug resistance, only the rare cysB mutants possess sufficient fitness to persist in the setting of an infection. However, even these mutants are rarely found in an infected bladder, probably because mecillinam reaches levels  so high as to be inhibitory even to these mutants. In simple terms, a high growth rate of the pathogen is required in this environment, if it is to counter its constant expulsion from the urinary tract. 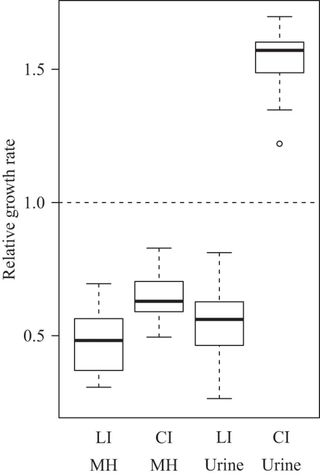 Figure 3: Box plot of fitness of laboratory-selected E. coli isolates (LI) and clinical isolates (CI) in MH medium and urine, showing (from top to bottom) the maximum fitness value, the upper quartile, the median, the lower quartile, and the minimum fitness value. A single outlier is shown as a circle. Fitness was measured as the relative growth rate, where the parent strain was set to 1.0. Source

In a general sense, having a pathogen become resistant less often in a person than in the lab is good news. The bad news is that to assess the significance of resistance arising requires more complicated and expensive technologies. However, the demonstration of the importance of the environment in drug resistance is critical to all of us involved in early antibacterial discovery. So often we lower the priority of new leads based on traditional and antiquated measures of resistance. I have the uncomfortable feeling that a potentially large number of useful drugs sit in bottles on a shelf and are not further tested because they resulted in a "high rate" of resistance. Clearly, we need to think more deeply about the issues, especially regarding the relevance of drug resistance in the infectious setting. The work of Andersson and colleagues emphasizes the importance of a higher order understanding of antibiotic drug resistance and serves as a framework for evaluating resistance in a more meaningful context. It emphasizes the need for new methodologies to measure antibiotic drug resistance in animal models of infection that capture 1) physiology of the pathogen, especially its level of fitness, 2) drug exposure levels, and 3) host response mechanisms such as the innate immune system. Alas, these are all ignored by traditional in vitro drug resistance assays. Without revising our thinking, we risk ignoring or deprioritizing potentially novel therapeutic antimicrobial agents based on faulty assumptions of their propensity for drug resistance. This is something we cannot afford to do in our search for novel agents to combat the antibiotic resistance epidemic.

Terry is a Distinguished Scientist at Merck & Co.