No Free Lunch for Cheaters

Bacteria engage in a variety of behaviors that require coordinated gene expression, such as bioluminescence, biofilm formation, production of virulence factors, and antibiotic resistance. In these situations, gene expression requires a critical number of cells. In its absence, the exercise would be in vain, something like two or three people attempting a flash mob in Grand Central Station — clearly a waste of resources. Bacteria coordinate their flash mobs via a form of cell-cell communication known as quorum sensing, in which signaling molecules activate gene expression, but only when the population reaches a critical density. However, among the critical mass of cooperators are the inevitable moochers who enjoy the benefits of the group output without themselves contributing any effort. Unchecked, such cheaters could overwhelm the population. What keeps them in check? Wang and coworkers reveal one way that moochers are policed in populations of the gram-negative bacterium Pseudomonas aeruginosa. 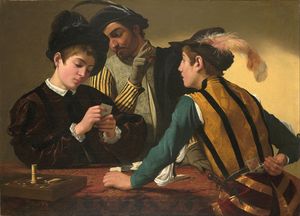 P. aeruginosa is an opportunistic pathogen in humans who are immuno-compromised, such as patients with cystic fibrosis, cancer, and AIDS. It can also colonize healthy individuals, causing hot-tub rash and infections originating from contaminated catheters and other medical devices. P. aeruginosa uses two linked quorum-sensing systems known as the LasR-LasI system and the RhlR-RhlI system. LasI catalyzes the synthesis of the signaling molecule N-3-oxo-dodecanoyl-homoserine lactone. When this molecule has built up in sufficient amounts — indicating a quorum of bugs — it binds to the transcription factor LasR. LasR then activates about 300 genes, including those encoding extracellular proteases such as elastase, plus the rhlI and rhlR genes.  In turn, RhlI catalyzes the production of another autoinducer, butyryl-homoserine lactone. When enough of this 2nd signaling molecule is present — again, indicating a quorum of bugs — it binds to the transcription factor RhlR.  RhlR in turn activates a set of genes that partially overlaps that activated by LasR.

So how does this seemingly convoluted system work? One product of quorum sensing in P. aeruginosa is a (LasR encoded) secreted protease that is required to break down casein into the amino acids and peptides needed for growth in media where casein is the sole source of carbon and energy. When grown on skim milk agar plates, a zone of clearance surrounds colonies that secrete the protease, indicating casein breakdown. However, after 2 − 3 weeks of daily transfer in casein broth and plating on agar, some colonies emerge that have no zone of clearance. These consist of "cheaters" with a mutation in lasR that prevents transcription of the protease gene. In media broth, these cheaters can mooch off their more community-minded brethren that make the protease. Most telling is that the population does not collapse under these conditions but eventually reaches equilibrium between cheaters and cooperators, suggesting that the cooperators (LasR+) must somehow be policing the cheaters (LasR−). The authors hypothesized that the policing agent may be a toxic product under the control of RhlR, leading to the prediction that a population of rhlR mutants will be ineffective at policing cheaters. Eventually, there will be too many cheaters and not enough cooperators, and the population will collapse. Thus, the cheaters have suicidal tendencies. 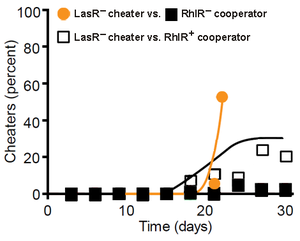 (Note: the original Figure is visible upon clicking on this reduced version) Figure 2. Emergence of LasR− social cheaters from cooperators growing in casein broth. Y-axis: % protease-negative cheaters. Six representative experiments with a RhlR− cooperator (solid symbols) are shown. In four of the experiments with the RhlR− mutant, cheaters emerged (colored symbols), and their abundance rose rapidly. The experiments terminated when there was no growth after transfer. The control results with a RhlR+ wild-type P. aeruginosa PAO1 cooperator show three individual experiments where cheaters (□,○,△) come to equilibrium with the cooperator at approximately 30% of total as expected from previous reports. Source

To test this idea, they carried out nine laboratory evolution experiments in minimal casein broth with an RhlR− mutant. This strain is a cooperator in that it is still able to produce protease, but it won't be able to activate the RhlR-controlled factor that is the suspected "billy club". As expected, cheaters emerged at various times in six cultures, then proliferated rapidly (Fig. 2).  Sequencing of five of the cheater cultures revealed that they were mutated in lasR, and thus incapable of activating the RhlI/RhlR system.

To confirm that policing by RhlR contributes a fitness advantage to P. aeruginosa in casein broth, wild-type (LasR+RhlR+) or police-deficient cooperators (LasR+RhlR−) were competed against each of the two cheater strains (LasR−RhlR− and LasR−RhlR+). The wild-type cooperator strain was able to hold the LasR−RhlR+-cheater at bay, with the frequency of cheaters relatively constant after five days of passage. But the police-deficient cooperators were unable to control either of the cheater strains, which took over and crashed the populations within three days. Interestingly, it appears that cheaters also suffer a competitive disadvantage when RhlR is mutated: the LasR−RhlR−-cheater was trounced by the wild-type cooperator strain, raising the possibility that RhlR-controlled genes include both the policing agent and the antidote.

So what is the billy club wielded by the policing strains of P. aeruginosa? The researchers suspected cyanide for a couple of reasons: RhlR controls the transcription of the genes that make cyanide and, as importantly, it also mediates increased expression of a cytochrome oxidase, which in theory could aid in cyanide resistance. An RhlR-controlled mechanism of cyanide resistance would allow the policing bugs to avoid succumbing to friendly fire. To test the theory that cyanide is the billy club, the researchers competed a cyanide synthase-deficient cooperator (LasR+HcnC−) against a cyanide-deficient cheater (LasR−HcnC−-mutant) in casein broth. The mutant cheater strain handily outcompeted the mutant cooperator strain, which eventually collapsed at a cheater initial frequency as low as 1%. 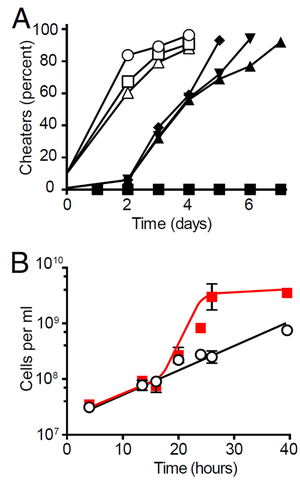 Further confirmation of cyanide as a policing agent comes from experiments based upon its being a low molecular weight, diffusible compound. Growing in a dialysis bag surrounded by a culture of wild type bacteria, RhlR−-mutants or wild-type bacteria showed a two-log reduction in number. Similar yields were found when the HcnC−- mutant was outside and an RhlR−-mutant was inside the bag. Thus, a diffusible factor is responsible for wild-type suppression of RhlR−-mutant growth.  These results also show that cooperators are more resistant to cyanide than are cheaters.

One may expect that a mutation that confers a fitness advantage in the specific case of casein broth may incur a cost under more plush conditions. That is, growing alone, the HcnC−-mutant cooperator (produces protease but not cyanide) should do better than the wild-type strain that produces cyanide. Sure enough, cell yields of the cooperator cyanide-deficient mutant were higher than that of wild-type bacteria (Figure 3, right panel). But the benefit is well worth this price.

The practice of policing in order to enhance the fitness of a population is prevalent among animals. To cite but one example, ants police the reproduction of workers to increase the reproductive efficiency of the colony. The research reported here clearly establishes that P. aeruginosa cooperators punish social cheaters via RhlR-mediated cyanide production. Key to this system is a quorum-sensing cascade: LasR-dependent control of the public good (the extracellular protease) is coordinated with RhlR-dependent policing (cyanide production). It was shown that also cooperators don't have a free lunch — policing comes at the expense of impaired growth yield.  In addition, it is interesting to note that cheaters emerged in only six of nine evolution experiments, spurring the question:  What alternative evolutionary path is in play? Stay tuned for answers to be revealed sometime in the near future, but only when a sufficient quorum is sensed.