Pictures Considered #25 : Getting A Ride 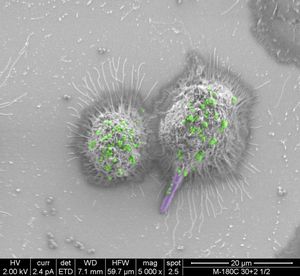 A recent review article deals with the fascinating phenomenon of pathogens exiting from their host cell. Sometimes, one pathogen helps another one in transmission to the next host. In one case, a Candida albicans hypha caught in the act of fleeing a macrophage can be seen carrying Staph aureus cells along.

The authors write: "In addition to successful microbial persistence and enhanced virulence, infection by one pathogen can manipulate host immunity to the benefit of other pathogens". Using a mouse model of peritonitis, a recent study by Peters & Noverr demonstrated that co-infection with C. albicans and S. aureus resulted in enhanced mortality, concomitant with significant increase in proinflammatory cytokines associated with an acute aggressive inflammatory response. Combined, the findings from these recent studies indicate that in addition to augmented pathogenicity, C. albicans and S. aureus co-infection modulate innate inflammatory events. Therefore, it is feasible to speculate that the interaction between these diverse species in a host may also involve immune co-evasion strategies to compromise the ability of immune cells against polymicrobial infections. These speculations were alluded to by co-phagocytosis studies using murine macrophages where S. aureus was seen co-escaping macrophages via its association with the invasive hyphae (see Figure). Despite the important clinical implications, however, this aspect of fungal-bacterial interactions in the host is yet to be fully explored."