« Pictures Considered #25 : Getting A Ride | Main | Your Favorite Talmudic Questions, I. »

Let me meander a bit before tackling the topic of how small a size microbes can attain. One of the main tools in this business is filtration, a technology that we tend to take for granted in the microbiological lab. Yet, filtration has a notable history and notable applications. It was used in the very early days of modern microbiology, e.g., in Pasteur's lab, to separate bacteria from their medium and to rid contaminated water from noxious organisms. It has had many other important uses, perhaps the historically most prominent one being to distinguish between bacteria and viruses (which were then referred to as "filterable viruses"). Nowadays, filtration is widely used to selectively retrieve eukaryotic unicellular microbes (e.g., protists), prokaryotes (bacteria and archaea), or viruses from samples of dilute habitats such as seawater. It is also worth noting how filtration technology has progressed from simple gravel filters to "filtration candles" (tubes made of diatomaceous earth), to modern membrane filters with defined pore sizes. For the ingenious ways of how this is done nowadays, see here.

Figure 1. A typical "candle" Berkefeld filter can be immersed in the fluid to be filtered and the filtrate removed by applying vacuum to the nozzle at the right. Source

I am moved to bring this up because of a recent report extends previous observations that microbes in nature tend to be small. In fact, bacteria found in groundwater are very small, around 0.009 μm3 or less than 1/100 the volume attributed to a prototypical Escherichia coli cell. This paper relies to a significant extent on the filterability of the smallest microbial cells, the so-called nanobacteria, which pass through filters with the standard 200 nm pore size previously believed to 'filter-sterilize' any sample. Such filters do in fact retain very well the "normal" sized microbial cells with one notable exception: the mycoplasmas, which, to the chagrin of cell-culture laboratories, can pass through these filters even though they are usually larger than 200 nm in diameter. It is thought that, being wall-less, mycoplasmas can slim down to a thinner shape that allows them to squeeze through such pores. 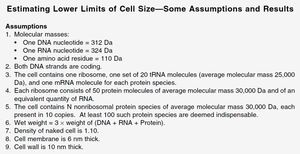 That some bacteria in the environment are very small has been known for some time, but for several reasons, the topic has been controversial. This is not for lack of interest. To give you an idea, a workshop on the lower limits of bacterial size was convened in 1999 by the National Academy of Sciences of the U.S.A., spurred by a report of very small (10 to 200 nm) bacteria-like particles in Martian meteorites. The participants were concerned with the limits on size imposed by the requirement to make the needed number of proteins and the ribosomes involved in the task. What did they conclude? For starters, the radius of curvature of the membrane was not seen as the limiting factor. They went on to say: "Given the uncertainties inherent in this estimate, the panel agreed that 250±50 nm constitutes a reasonable lower size limit for life as we know it." So, no bacteria from Mars. Note that these calculations refer specifically to free-living cells, because obligate endosymbionts with greatly reduced genomes may have fewer requirements and could consequently be smaller in size. The panel also noted that "bacteria with a diameter of 300 to 500 nm are common in oligotrophic environments, but that smaller cells are not.” (An aside: some 50 years ago, I placed some E. coli cells on agar containing only phosphate buffer, no nutrients. They divided four times without growing, becoming coccoid cells about 1/16 the size of the original ones. I did not publish this, as it seemed marginal. But so much for E. coli being around 1 µm3 in size!) 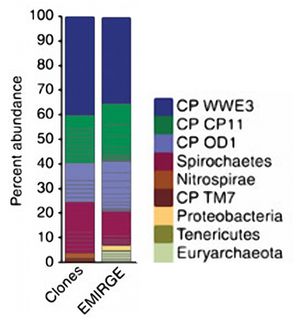 A recent paper from the Comolli and Banfield labs goes a ways towards clarifying the situation, at least for groundwater, and may well serve as a model for work on small bacteria in other habitats. Theirs is a systematic metagenomic analysis of the particles collected from groundwater samples after passage through a 200 nm filter and retained by a 100 nm one. The population that passed the 200 nm filter was quite different from that was retained by it (how about that! Seldom does a factor of 2 result in such a huge difference!). The groundwater samples were collected from a relatively shallow site in NW Colorado, filtered, and immediately frozen for transport to the lab. Before the collection, the soil was "amended" by the addition of acetate, which acts as an electron donor to stimulate the growth of metal-reducing bacteria (although it seemed to have a relatively small effect in this study.)

The cells retained by the 100 nm filter were mainly bacterial, with few archaeal sequences present. The majority was represented by three candidate phyla WWE3, OP11, and OD1. The cells, though small, were quite 'chunky' and ranged in size from 217 nm x 179 nm to 486 nm x 238 nm. The smallest ones had a cell volume of ca. 0.002 µm3, a value that also takes into account the cell envelopes. This is tiny indeed and is close to the minimum size that was predicted to support life. Electron tomography of these cells shows that they use their small space efficiently: there is just about enough room for the DNA, which is tightly coiled, nucleoid fashion, and some 40 ribosomes. The cell envelopes are composed of an S-layer with hexagonal symmetry and a rather thick cell membrane. 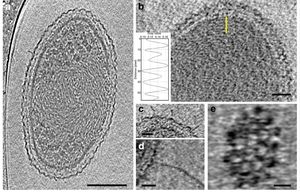 As the authors say: "Given the small cell sizes, the large fractions of the cell volumes devoted to the cell walls, including the S-layers, suggest that these features are important for survival, possibly by mediating cell–cell interactions." Pili are present in many of the cells, which they may use for attachment. Some cells are dumbbell in shape, suggesting they may have been caught in the act of dividing. There are even some phage-like particles in sight, which was taken as indication that the cells were metabolically active. In general, these organisms seem closer to the gram-positives than the gram-negatives, although I have yet to see Gram stains of them.

Small size suggests small genomes, and, sure enough, some of these bacteria have genomes as small as ca.700 kb. Some have slightly larger genomes, but all fall in the reduced size category. Many questions still remain. Do these genomes encode for all the functions needed for free life, or are they missing some essential components such as pathways to make building blocks or energy? The latter would force them to live in partnership with other organisms, which would supply what they are lacking. Regardless, one thing is clear: with so few ribosomes, they are likely to grow slowly. This may have thwarted efforts to cultivate them, as microbiologists have only recently leaned to be patient regarding how long to incubate cultures. 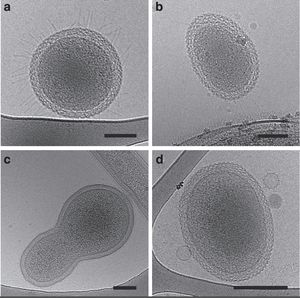 Figure 4. The cell envelope includes a remarkable and distinct S-layer. Numerous pili-like structures are clearly discernible radiating from the surface of the cell in a or from the cell's pole in b (note that the latter interconnect two cells). c A dividing ultra-small cell in contact with a Spirocheate cell (only a small region of the latter is shown). Note the contrast at the interface, suggesting cell-to-cell interaction. Three viral particles associated with the surface of the cell are shown in d. Scale bars, 100 nm. Source

Why have we lived for so long with the belief that most microbes are in the micrometer range? The general practice to assess microbial sizes is to stain the cells to provide sufficient contrast for examination with an optical microscope. But most of the small cells have not yet been cultivated, thus what would you do a stain of? Unless you were looking for these midgets, you would not think of looking at what passes through the magic-sized 200 nm filters. Even if you did, all you would see are small dots that may easily pass for granular debris. Basically, the problem may well have been our adherence to firmly entrenched but successful technologies such as filter-sterilization. Add to that the fact that as microbiologists we are brain washed early on in our training to believe that 'regular' microbes are indeed small enough. Thinking of even smaller ones requires a different mindset.

So, what's this miniaturization all about? The general rule is that attaining a greater surface-to-volume ratio maximizes diffusion in and out of the cell, which can help microbes take up the scarce nutrients in oligotrophic environments. In addition, these organisms live in relatively stable ecosystems, thus they need not carry extra genes for survival in a changing environment.

This is not a small matter (forgive the pun). Many soil and marine bacteria are also tiny. Furthermore, groundwater, such as the samples where the nanomicrobes were collected from, is the reservoir for a great number of microbial cells. Whitman et al.'s famous "census" of microbes on Earth suggests that subsurface prokaryotes number 0.25 − 2.5 ×1030 cells, a healthy chunk of the grand total. When it comes to bacterial and archaeal size, small is the rule.