« No Free Lunch for Cheaters | Main | Four Resources and One Fiction » 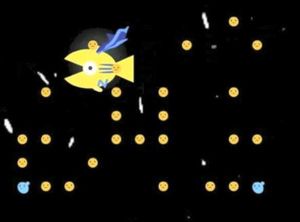 What could those three possibly have in common? Believe it or not, they all play the role of a lead action figure in kids' video games. Hearing the latest edition of a German biotechnology news broadcast, I was surprised to learn that researchers of the Riedel-Kruse lab at Stanford University have developed — what they call — Biotic Video Games, where the Paramecium are controlled and maneuvered about via a joystick and managed to publish their findings in a research paper!

The device is basically composed of a fluid compartment, where the Paramecium move around and roam about freely. I am sure you are wondering, exactly how BIG (small) is a paramecium. Well, it is so small, making it actually difficult to observe by the naked eye. But no worries! They can be seen quite clearly on your screen, while you're playing, thanks to the provided microscope camera, which is connected to electrodes and supplies you with a live feed, being superimposed on the flash game board onto your screen. The joystick is capable of creating a weak electric field, which influences the direction of their movement, as you wish.

Eight different games have been developed and given quite funny names, as Ciliaball, Pac-medium, Microbash, and Pond Pong. For instance, in one game version, the player needs to move about the Paramecium to score a soccer goal. To help you easier imagine this, take a look at this 3-part video.

As Riedel-Kruse put it, these games serve two ultimate goals: First, to awaken the scientific interest in those young kids and teenagers, hopefully motivating them to someday pursue a career, heading off in that direction. And after all, scientists can collect and analyze information about those tiny organisms, whilst playing with them.

Radwa Raed Sharaf did her master's in molecular medicine and is now pursuing her PhD at Harvard studying viral immunology.