Daring ideas are like chessmen moved forward.
They may be beaten, but
they may start a winning game.
— Johann Wolfgang von Goethe 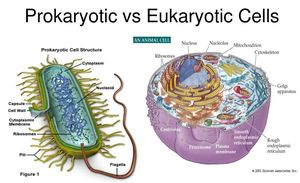 The contents of our own cells, like those of all eukaryotes, are compartmentalized within a collection of diverse, membrane-bounded organelles. The lipid bi-layer margins, studded with embedded transport proteins, pass some molecules while blocking others. The enzymes that catalyze sequential steps in a metabolic pathway are often clustered together inside a structured organelle, a strategy that increases metabolic efficiency while also protecting the cell from toxic intermediates. Bacterial cells, lacking the intricacies of internal membranes, were long pictured as non-descript hodge-podges, simply bags of enzymes, as if that were the best that four billion years of evolution could achieve. Now we know that is not so. Lipid membranes are not the only way to organize cellular contents, nor are bounding membranes necessary in order to construct functional 'organelles.' 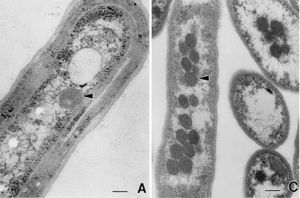 What are these bacterial microcompartments? As explained in a recent review article: Bacterial microcompartments (MCPs) are sophisticated protein-based organelles used to optimize metabolic pathways. They consist of metabolic enzymes encapsulated within a protein shell, which creates an ideal environment for catalysis and facilitates the channeling of toxic/volatile intermediates to downstream enzymes. Each MCP is bounded by a polyhedral protein shell, typically 100 − 200 nm in diameter. Being small and polyhedral, they were mistakenly thought to be phages when first noticed in TEMs of cyanobacteria. The bacterial shell proteins self-assemble into MCPs by forming flat hexameric tiles that then connect to form the mature,multi-faceted particles.

MCPs are widespread in the bacterial world; predicted homologs of the major shell protein have been found in 23 bacterial phyla so far. They are also functionally diverse. Each MCP shell encloses the enzymes of a particular metabolic pathway. Those known as carboxysomes contain RuBisCO and are the sites of carbon dioxide fixation — as much as 25% of the total global activity. A varied group of MCPs, called metabolosomes, carry out the catabolism of an assortment of small organic compounds. Both types of MCP were described in detail in an earlier post.

It takes more than shell self-assembly to build functional MCPs. The right enzymes need to be stationed in their interior, each one positioned for efficient function. This is achieved by assembly itself. Enzymes destined for the lumen bind to specific sites on the appropriate shell proteins prior to shell assembly. They hold on as the shell proteins associate to form the structure, and thus end up encapsulated and attached to the interior surface. The protein shell works more magic; it governs molecular traffic into and out of the MCP. Pores formed by the shell proteins allow small, strongly polar molecules to pass, while blocking less polar or non-polar ones. Sophisticated dynamic gated mechanisms govern transport of some other molecules. In summary, these are highly evolved structures worthy of a place in the bacterial cell. 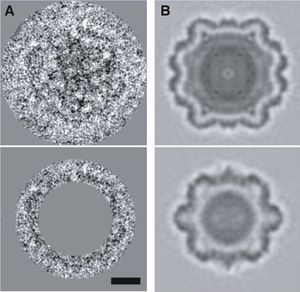 Nanocompartments are also protein-bounded bacterial organelles but smaller — typically 22 − 32 nm in diameter — and unrelated to their larger counterparts. One nanocompartment family, including those characterized in Thermotoga maritima, assemble their shells from the protein encapsulin. Numerous other bacteria may do likewise; an iterative BLAST search of sequenced genomes in 2007 found 49 homologs to T. maritima's encapsulin.

What do these smaller organelles do? One clue came from comparing the neighborhoods where these encapsulin genes are found in several bacterial genomes. These genes are typically part of a two-gene operon along with a gene involved in the oxidative-stress response:either a gene for an iron-dependent peroxidase or for a ferritin-like protein. The similarity to ferritin turned out to be significant. Ferritin forms multimeric 'cages' that store iron and regulate its availability to the cell, and some of these nanocompartments perform a similar function.

Researchers studying Myxococcus xanthus observed a few small, icosahedral structures in vegetatively growing cells. On closer look, these proved to be nanocompartments of the encapsulin family. Each has an icosahedral protein shell (32 nm diameter) constructed from 180 encapsulin monomers. As with the microcompartments, their shells are thin with abundant pores, some lined with charged amino acid residues and others with non-polar residues. The inner surface of the shell contains numerous conserved polypeptide binding sites that interact with C-terminal 'tags' present in the proteins destined for encapsulation. In M. xanthus, two encapsulated proteins with ferritin-like iron binding capabilities attach to these conserved binding sites. The resulting nanocompartments have a dense core containing both iron and phosphorus (approximately 4:1 Fe:Pi). Using STEM (scanning transmission electron microscopy), the researchers estimated that each nanocompartment could store 30,000 iron atoms — an order of magnitude more than the smaller ferritin cages. Impressive indeed! 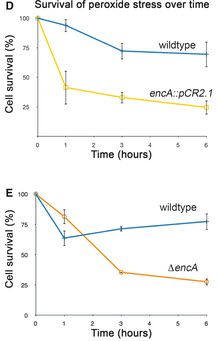 Why might a bacterium need such iron storage capacity? Although iron is needed for some metabolic enzymes, during oxidative stress it can cause problems by catalyzing the production of damaging hydroxyl radicals through the Fenton reaction. Perhaps these iron-storing nanocompartments might regulate the level of iron in the bacterial cytoplasm to reduce damage from oxidative stress. To test this hypothesis, the researchers deleted or disrupted the encapsulin gene in M. xanthus and then exposed mutant and wild type cells to oxidative stress in the form of 0.5 mM H2O2. Loss of encapsulin reduced the survival rate by more than 50% under their experimental conditions. In another experiment they stressed wild type cells by starving them for amino acids. Here they found no increase in the amount of encapsulin per cell but observed a five-fold increase in the number of nanocompartments. Since protein synthesis was limited by amino acid starvation, it makes sense that the protective response was at the level of assembly and did not require de novo synthesis. (They did not report the effect of starvation on the cellular levels of the two ferritin-like proteins that bind the iron within the nanocompartments.)

Is there a phage lurking somewhere?

Where did these unexpected bacterial polyhedral protein shells originate? Since such self-assembled protein structures are the hallmark of viral capsids, you might suspect that they were a phage invention that was later co-opted by a few particular Bacteria and Archaea. Is there any evidence to support that idea? Not so far for the microcompartments, but yes for the icosahedral nanocompartments. Since the known encapsulin proteins are all homologs, it is not surprising that those compared so far all have the same 3D structure (i.e., fold). However, it is most intriguing that their shared fold is the versatile fold first observed in the lambdoid phage HK97 (family Siphoviridae). That cosmopolitan HK97 fold is used by viruses of all three domains of life. Thus its ancestral form is thought to have arisen very early in the evolution of life, before the divergence of the three domains. Now we find that canny bacteria have co-opted this versatile fold and put it to their own uses. We've seen this sort of bacterial thievery before on STC (e.g., in gene transfer agents and pyocins). In the microbial world there are no laws protecting intellectual property against theft. Although such co-optation is infrequent, successful gene pirates can win big. 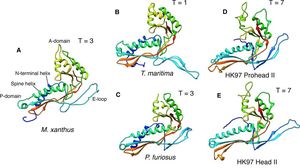 (Click to enlarge) Figure 5. Encapsulin proteins from both bacterial and archaeal nanocompartments have the same fold as the major capsid protein of the phage HK97 (Siphoviridae). A Encapsulin from M. xanthus (pdb4PT2); B Encapsulin from Thermotoga maritima (pdb3DKT); C Encapsulin from Pyrococcus furiosus (pdb2E0Z); D Major capsid protein from the HK97 prior to DNA packaging (pdb3E8K); E Major capsid protein from the HK97 capsid after DNA packaging (pdb2FT1). Models are rainbow-colored, with the N-termini of the solved structures in blue and the C-termini in red. T numbers are triangulation numbers; the higher the number, the more protein monomers that comprise each icosahedral face and typically the larger the capsid. T=7 capsids usually require scaffolding proteins for assembly, whereas the T=1 or 3 capsids do not. Source

Postscript: How might a bacterium have stolen capsid from a phage? Perhaps it happened like this… (If terms such as temperate and prophage are unfamiliar to you, refer to an earlier post on lysogeny.)

Once upon a time, a temperate phage, perhaps an ancestor of HK97, took up residence as a prophage in the chromosome of its host. Life there was good for the prophage, albeit slow-paced. The host did all the work including prophage replication, while the prophage in turn thwarted infection attempts by related phages. Then one day disaster struck. The host's DNA replication machinery had allowed a copying error to slip through, an error that destroyed the prophage's ability to excise from the chromosome, thus leaving it stranded there, helpless, never able to infect again. Slowly, over the course of time, its now useless genes would be eliminated as excess baggage by the host. This is a familiar story retold in most bacterial genomes. However, in this particular case capsid proteins were synthesized and were still able to self-assemble in the cytoplasm into a smaller, simpler version of the original phage capsid. Not one to reject manna from heaven, the host put those protein shells to work to store its stash of iron and phosphorus. Soon, via HGT, this trick spread throughout the bacterial world. Then came a day in 1956 when a researcher reported sighting virus-like particles in TEMs of a cyanobacterium, and the story, with further embellishments, is now spreading through the research world. Likely some enterprising nanotechnologist will adapt this protein manna to serve his own purposes. This evolutionary tale is not over yet.