« If Microbes Could Tweet... | Main | In MemoriamS. Marvin Friedman »

Editor's Note: This is the seventh in an ongoing series about cells and processes that might not come im­me­dia­te­ly to mind when you think "microbe." The first six in our "Oddly Microbial" series by Marcia Stone can be found here: Ribocytes; Cancer cells; 86-Million Year-Old Deep Seabed Mystery Cells; Prions; Programmed Cell Death; and Giant Viruses. 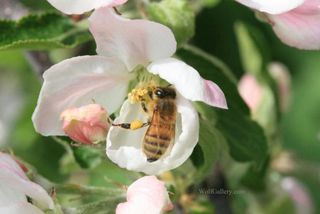 Figure 1. Legend: A bee at work on an apple blossom. Image by Richard Wolf

The gut microbiome of 'farmed' honey bee queens is unusually acquired, yet, in the end, surprisingly like that of their royal sisters in the wild and very different than the workers who care for them.

A team of entomologists and microbiologists from North Carolina State University (NCSU), Indiana University, and Wellesley College have, for the first time, described the bacterial communities colonizing the hindguts of honey bee queens as they navigate the complicated commercial queen-rearing process. "It was reassuring to discover that queens reared by beekeepers eventually acquire the typical royal signature [gut] microbiome of bee-specific Al­pha­pro­teo­bac­teria", says NCSU's David Tarpy who led the investigation.

Despite being somewhat aggressive and argumentative the normally predatory Al­pha­pro­teo­bac­teria are especially useful microbial companions; for example, those that have evolved into mi­to­chon­dria power the cells of most eukaryotic life forms including ourselves and bees. In contrast to mitochondria, the strains of Al­pha­pro­teo­bac­teria colonizing queen bee gut likely earn their livings by degrading complex nutrients and protecting their hosts against invading pathogens, either by killing the intruders directly or by inducing the host's immune system to do it for them.

In managed colonies, beekeepers co-opt the natural process of queen replacement "where an aging queen is superseded by a daughter who has been raised by her sisters", explains Tarpy. Instead, laboratory-bred queens are artificially introduced into their intended hive after taking a circuitous route through several other colonies where some workers are related and others not. "Thus it's fortunate that culture-independent technologies are making their microbiome members easier to identify and track",  according to microbiologist Irene L. Newton at Indiana University.

Deep sequencing enabled Newton and colleagues track a cohort of sister queens beginning from their infancy as larvae in 'cell builders', — queenless colonies staffed by care-giving workers. After about a week they're sealed into cells and then each cell is transferred to a second small colony known as a "mating nucleus" (commonly shortened to "mating nuc"). Here another set of workers support the queen for another week or so of her adult life. Once she has mated and begun laying eggs, typically about two to three weeks, the queen is transferred to her permanent colony with a final group of unrelated workers that her own progeny eventually replace. Notably, queens do not feed themselves at any point in this process. 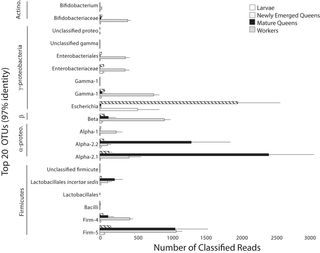 (click to enlarge) Figure 2. Distribution of the top 20 bacterial operational taxonomic units (OTUs) found across all samples and comprising >96% of the data. The prevalence of 19 of these top 20 OTUs (excluding Lactobacillalesincertaesedis) was found to distinguish worker and queen. Libraries from mature queens are characterized by a bacterial community in which Al­pha­pro­teo­bac­teria predominate. Source

"In this highly managed, complex environment, queen microbiomes changed dramatically as they aged and were nurtured by different sets of workers", according to team member Heather Mattila from Wellesley College. The greatest shifts occurred between the very young and the mature, egg-laying queens. The former were mainly comprised of enteric bacteria, the kinds usually as­so­cia­ted with fecal matter (why remains unknown), and the latter are the usual honey bee-specific Al­pha­pro­teo­bac­teria. However, worker microbiomes were more similar to those of workers in unrelated colonies than to the related or unrelated queens they hosted and queens lacked the canonical core microbiomes associated with workers. Furthermore, even the queen's own progeny don't inherit her gut bacteria, likely because bacteria can't penetrate the egg shell and she doesn't care for the young herself.

What differs between the two groups is diet. Compared to workers, young queens are fed large quantities of royal jelly from the workers' hypopharyngeal glands, which are heavily colonized by honey bee-specific Al­pha­pro­teo­bac­teria. Even after the queens mature, they don't feed on bee bread or nectar directly but continue to be fed royal jelly by their attending workers. Thus, these researchers reasoned that the royal jelly may be responsible for the different microbiomes of workers and queens. Royal jelly, they argue, has already been shown to contain proteins that may alter DNA methylation and this is likely responsible for the caste distinction between queens and workers. 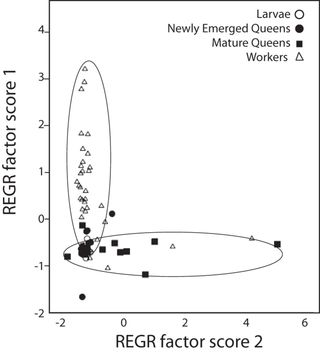 Figure 3. Legend: Principal component analysis clustered the microbial communities of workers separately from those of mature queens, while newly emerged queens and larvae clustered together. Ellipses are presented to highlight the visual pattern only. REGR, regression. Source

"Because the queen microbiome doesn't reflect or impact that of the workers within a specific colony or even workers in general, the physical movement of queens from one hive to another doesn't appear to have any major effects on the gut bacteria of either", conclude these researchers. With bees beset by combined stress from pesticide exposure, emerging parasites and pathogens, habitat loss, pollen scarcity and climate changes, this is the first good news for apiculture in a long time because at least one thing being done isn't having a negative impact on a population of important pollinators in serious decline. It also suggests that if managed correctly farmed bees could safely help reconstitute our failing honey bee numbers. "These findings are a significant addition to the existing body of honey bee research", comments USDA-ARS bee scientist Yan Ping (Judy) Chen in Beltsville, Maryland. "The gut microbiota of queen bees hasn't been characterized before", she adds, "so this is yet another important first for these researchers".

Tarpy and colleagues also recommend stocking cell builder colonies with large populations of nurse bees to adequately provide queen larvae with royal jelly, which is not only an important source of their microbiota, it's what makes a queen a queen. 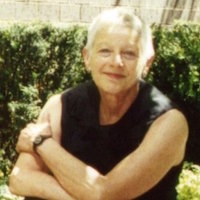 Marcia is science writer based in New York City and has been a frequent contributor to the ASM’s Microbe magazine.