In the late 1960s, readers of structural biology papers were frequently confronted with (and con­fused by) electron micrographs of heavily intertwined DNA molecules that resembled a hopelessly tangled ball of wool. They were really hard to "read" even for experts (see Pictures Considered #6 for an example), and pictures as the one considered here were notable exceptions (Fig. 1). 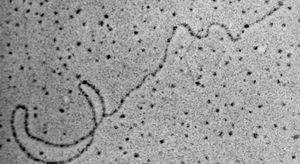 This unassuming micrograph of a double-stranded DNA circle of bacteriophage ΦΧ174 (length 5386 bp) with its long single-stranded extension was part of the work that earned the author a doctorate from Harvard, a paper in Nature, and... halted his scientific career (transiently), as the experts at that time wouldn't believe that this was a true replication intermediate, stemming from what every molecular biology textbook covers with a dedicated chapter today: rolling-circle replication. Back in the 60s, it was known that the single-stranded DNA (ssDNA) in the ΦΧ174 virion is con­ver­ted to double-stranded DNA (dsDNA) after entry into the host cell as the initial step in its replication. It was assumed, as was dogma then, that the double-stranded circle of unit genome length replicates in the theta-mode (θ) like bacterial chromosomes (see Pictures Considered #2 and #23). 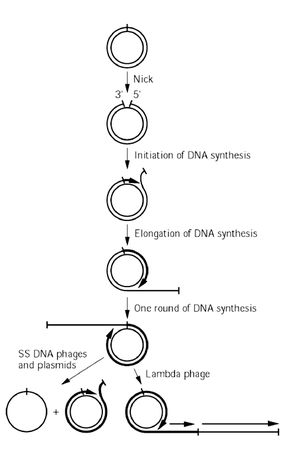 Figure 2. DNA synthesis initiates using the free 3' -OH end at the nick as a primer, and a rep­li­ca­tion fork proceeds around the template. In the process, the newly synthesized strand displaces the old strand from the template. In the case of replication of the replicative form (RF) of single-stranded phage genomes and of plasmids of Gram-positive bacteria, the dis­placed old strand is cleaved off after one round of replication and is con­ver­ted into the circular, double-stranded form. In contrast, in phage lambda replication, the replication fork pro­ceeds a number of revolutions around the template without cleavage of the displaced strand, and the displaced strand becomes double-stranded as it is peeled off. Source

The true hallmarks of rolling-circle replication cannot be seen in the electron micrograph shown in Fig. 1 due to its limited resolution (sic!). For one, initiation of replication is not brought about by an initiator protein that binds to a replication origin and tears the two DNA strands apart to expose single-stranded DNA as entry site(s) for helicases, primases, and polymerases, as in theta-replication. Instead, the 'initiator' in this case has endonuclease activity and makes a "nick", a single-strand cut, in its double-stranded binding region that provides the 3'-OH end for replication to start. Therefore, no (host) primase is required here (see Fig. 2). For most ssDNA phages — their conversion to dsDNA is worth a separate post, and is therefore neglected here — and small plasmids that sport rolling-circle replication, the initiator protein (REP) remains covalently bound (via a tyrosine residue) to the 5'-end of the nicked strand. This nicked strand is suc­ces­sively displaced by the (host) replisome, and since REP remains attached to it, it will encounter its original bin­ding site when the replisome has come full circle. The REP-bound strand is then released as a complete, co­va­lently-closed single-stranded molecule, and REP is free to make the nick again for the next round. Thus, and this is its second hallmark, rolling-circle replication is dis­con­ti­nu­ous: the replication of leading and lagging strand is uncoupled.

Rolling-circle replication — or sigma-replication (σ) — is also an integral part of bacteriophage lambda de­ve­lop­ment in the lytic cycle: after being injected into the host cell, linear double-stranded (ds) lambda DNA cir­cu­la­rizes via its cohesive ends (cos sites). Circular dsDNA then replicates a few times in the theta-mode (θ) before swit­ch­ing to the sigma-mode (σ). An aside: the­ nomenclature using Greek letters simply reflects the shape of the molecules in electron micrographs. The ssDNA stretch "peeled off" the circle by displacement synthesis, as shown schematically in Fig. 2, is con­ver­ted to dsDNA by lagging-strand DNA synthesis. It's the linear concatemeric (multi-genome) dsDNA obtained by rolling-circle replication that is then processed — by cleavage at the cos sites — for packaging  of linear (single-genome) dsDNA into preformed lambda phage heads. This said, you might assume that lambda replication is fully understood today. Not quite! Despite decades of work of (today few) dedicated lambdologists, the endonuclease responsible for making the es­sen­tial single-strand cut (Fig. 2, "Nick") at the ori to provide the 3'-OH end for replication to switch from θ-mode to σ-mode remains elusive. A fact Grzegorz Wegrzyn, an expert in this matter, confirmed to me during preparation of this post, in May 2015.