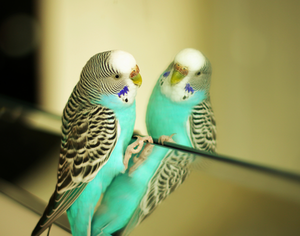 Why, hello there CC BY-NC-ND 2.0 shutterbugamar

For all things alive, from Nobel laureates to microbes, defining one's "sense of self" is crucial for success and survival. This allows every organism to distinguish itself from foreign and potentially harmful agents. But to be of benefit, simply identifying destructive agents is not enough. Identification must ultimately lead to removal. The animal immune system does both of these things very well. Microbes, like us, also need to defend themselves from the action of nefarious agents, which are mainly mobile genetic elements such as transposons, conjugative plasmids, and bacteriophage. These are eager to invade bacteria, using them as pawns to replicate their own DNA. However, microbes do not sit idly by and allow this to happen! They have evolved ways to protect themselves against unwelcome intrusions.

To combat such potential hazards, bacteria use specialized restriction-modification systems that distinguish self from non-self DNA, a particularly impressive task as DNA is ubiquitous to all life. To discriminate between their own and foreign DNA, bacteria "tag" their DNA by adding a methyl group to a base component, usually an adenine or cytosine. Methylation of these bases — by dedicated methyltransferases — occurs at specific sequences, or 'motifs', but does not interfere with base pairing in duplex DNA or with replication. Methyl groups added to C5 or N4 of cytosine and N6 of adenine harmlessly occupy the major groove of duplex DNA (Fig. 1). Bacteria then produce enzymes called restriction endonucleases, which cleave DNA unless it is protected by methylation. As a consequence, DNA methylation ultimately allows the bacterial host to "restrict" replication of foreign DNA because the invading DNA typically will not have the same methylation pattern as the host DNA. DNA restriction was discovered in 1953 in a famous experiment by Bertani  & Weigle. In the 60s then, restriction enzymes were discovered by Arber and Lederberg  &  Meselson. Since then, DNA methylation and restriction — the genes encoding both functions coming as gene pairs or triplets in most cases — have been found to be widespread in both prokaryotes and eukaryotes. Furthermore, DNA methylation influences not only cell defense, but many different processes, including DNA replication, mismatch repair, and pathogenesis.

A novel and quite distinct restriction-modification system has been recently discovered in a broad gamut of bacteria. Instead of leading to methylation, this system modifies the phosphates in the DNA backbone. Specifically, it replaces a non-bridging oxygen of the phosphodiester bond with a sulfur atom, in technical terms creating a phosphorothioate (PT). While this may seem to be a minor exchange, the PT linkage has a dramatic effect on the DNA's biochemical properties. The genetic locus responsible for this modification further encodes a linked novel restriction system that recognizes and cleaves specific non-phosphorothioated sequences, leading to their destruction. This is the first modification of the DNA backbone found in biology and is a unique twist on the restriction-modification theme. Interestingly, prior to this discovery in bacteria, nucleic acid chemists had introduced PT linkages into nucleic acids in order to increase resistance to nucleases that attack the phosphodiester bond. This modification has been particularly useful for the development of nucleic acid based therapeutics, such as aptamers. The finding that phosphorothioates occur in biological systems was the result of an incredible twenty year hunt for an explanation to an annoying, smeary lane on a gel. 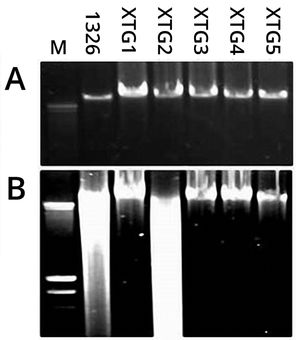 Figure 2. A All of the DNA samples were proven to be stable in normal agarose gel electrophoresis buffer with added thiourea. B Genomic DNA from wide-type Streptomyces lividans 1326 and its dndB mutant XTG2 both undergo degradation (smear in the lane) during gel electrophoresis in Tris-containing buffer.. M DNA size marker. Source

Annoyance turns to intrigue  Those of us who have ever extracted DNA and run an agarose gel can relate to the depressing image of a smear of stained DNA, typically caused by degradation. Most of us would chalk it up to sloppy technique and go back to the beginning. This degradation is precisely what scientists in Tobias Kieser's group saw during electrophoresis of genomic DNA extracted from Streptomyces lividans, a gram-positive soil bacterium (Fig. 2). Like most everyone else who has run into this, they also presumed that degradation was due to nuclease contamination. However their DNA was only degraded during electrophoresis with Tris-based buffers: it oxidizes at the anode during electrophoresis, producing a nucleolytic species that damages the DNA extracted from S. lividans. This can be avoided by using any buffer lacking a primary amine (like the one present in Tris) or adding thiourea, a potent antioxidant.. Also plasmid preparations from laboratory strains of E. coli or S. lividans used to transform S. lividans were modified to become sensitive to Tris-dependent oxidation and double stranded cleavage. DNA extracted from other closely related species, such as Streptomyces coelicolor and Streptomyces albus were not degraded, making this technical complication even more frustrating. Strain ZX1, obtained through mutagenesis of S. lividans, showed no DNA degradation during electrophoresis (Fig. 2). Comparing the genome of this strain to that of the parent S. lividans strain and S. coelicolor strongly suggested that a 90 kb mobile genetic element was responsible for the business of DNA degradation. Taken together, these observations suggested a modification that makes the DNA sensitive to oxidation. Now convinced that there was a genetic basis for this annoying technical problem, they named this locus dnd, for "DNA degradation". 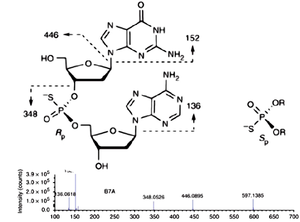 Figure 3. Mass spectrometry of the PT modification in E. coli B7A. DNA was extracted and treated with nuclease P1, snake venom phosphodiesterase and alkaline phosphatase and analyzed by reverse phase-HPLC. Specific peaks eluting between 39 and 40 minutes were analyzed by LC-MS. The fragmentation pattern observed suggested the presence of a dinucleotide with guanine and adenine, linked with a PT. Chemical synthesis of the proposed dinucleotide and identical analysis confirmed the same fragmentation pattern. Source

The dnd phenotype was mapped to a cluster of five genes, now named dndA−E. Further investigation of this locus provided clues about the DNA modification responsible for the dnd phenotype. The dndA gene shares homology with iscS, a gene involved in post-transcriptional modification of uridine in tRNA to 4-thiouridine. IscS acts as a cysteine desulfurase that removes the sulfur from cysteine (thus releasing alanine). This activity was confirmed for DndA in vitro. Given the similarity between IscS and DndA, the thought occurred that the Dnd modification could involve a sulfurtransferase acting on the DNA. Furthermore, modification of uridine to 4-thiouridine requires ATP, and since dndC shares homology with many ATP pyrophosphotases, could it provide the energy for DNA modification? Together, these notions suggested feeding of 35S-labeled cysteine to Escherichia coli strain B7A, which has a dnd locus very similar to S. lividans, to see if the sulfur was transferred to DNA. Sure enough, the researchers found such labeling. They then digested the modified DNA with a nuclease and dephosphorylated it. They got a dinucleotide that by mass spectrometry turned out to be made up of guanosine and adenosine linked by a phosphorothioate. This proved unequivocally that DNA degradation during electrophoresis was the result of a PT modification introduced into DNA (Fig. 3). More recently, the PT linkages from a broad range of bacteria have been quantified and found in different sequence contexts. Isn't this a scientist's dream, to have a smeary gel actually be the result of a completely novel DNA modification?

And the intrigue continues…  Since the identification of the dnd locus, homologous gene clusters have been found in over 200 diverse and distinct gram-negative and gram-positive bacteria, and also in some archaea (Fig. 4). The location of this gene cluster on a genomic island suggests that it may well have been acquired by horizontal gene transfer (HGT). Many of the bacteria that have dndA−E have an additional three gene cluster downstream, dndF−H, that functions as a novel DNA restriction system, targeting DNA with unmodified phosphodiester linkages. Loss of PT modification in bacteria expressing dndF−H results in double stranded DNA breaks, which in turn induces the SOS response, cell filamentation, and prophage induction. In other words, without the modification to protect their DNA, these organisms are in the same precarious position as their invading foes. Furthermore, bacteria expressing dndF−H can only be transformed with DNA containing PT modifications, a hallmark of restriction. As explained above, restriction-modification systems are meant to protect bacteria from foreign DNA, yet the dnd locus is present on a genomic island that is transferred to other bacteria via horizontal gene transfer, raising a sort of ‘chicken or the egg’ question. Rarely, restriction-modification systems are unable to recognize and protect against invasive, foreign DNA, usually because host methyltransferases modify the foreign DNA before restriction enzymes can cut the DNA. While this may appear to be an imperfect defense system, this foreign DNA can sometimes provide a selective advantage (see below) and thus drive evolution. Interestingly, in the majority of bacteria with the modification, genes dndA−E do not have the restriction genes dndF−H, suggesting that there is more to the PT modification than it being a restriction-modification system. This is reminiscent of the Dam/Dcm methyltransferases that methylate DNA, have no cognate restriction system, yet have been co-opted for DNA replication regulation and mismatch repair. One possible benefit of the PT modification may be protection against oxidative stress. A recent study found that although hydrogen peroxide (H2O2) inhibits bacterial growth, strains of Salmonella containing the PT modification were more resistant to oxidative damage. When exposed to H2O2, the sulfur in the PT modification was consumed and the DNA converted to a phosphodiester linkage due to oxidation. Therefore, aside from a restriction modification system, PT modification can be used as an antioxidant and a way to prevent DNA damage; perhaps another good reason for keeping these genes around. 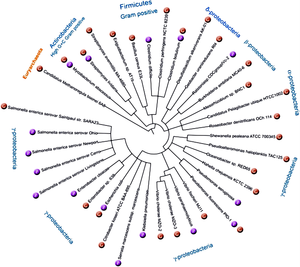 (Click to enlarge)
Figure 4. Phylogenetic relationship of dnd clusters in bacteria and archaea. "G" by the bacterial name indicates known, sequenced dnd loci, whereas a "P" indicates bacteria that exhibit the Dnd phenotype. For more information on Dnd, see the dndDB data base. Source

The discovery of the widespread nature of this modification, and its role beyond being "just another restriction system", bring up some interesting questions about its current function and its origin in nature. More recently, genome wide PT modifications have been quantified in a number of bacteria. While different PT modification systems have different sequence specificities, surprisingly, only 10 − 20% of the sites contained the PT modification. In other words, while many genomic regions should, in theory, have the modification, most do not. What determines whether to "phosphotiote" or "not to phosphothiote"? What is the physiological reason for this, and how does this play a role in restriction or resistance to oxidative damage? Does PT modification have other functions in bacteria? And does it occur in eukaryotes? These are just a few of the many questions that may be answered while hopefully studying this interesting new modification for many years to come! 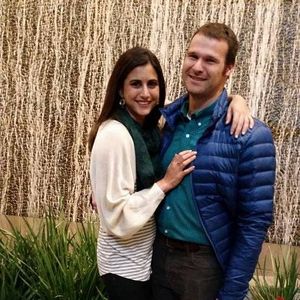 Rachel is a Ph.D. student in the Allen lab at the Scripps Institution of Oceanography and the J. Craig Venter Institute in La Jolla, CA. She studies marine microbes and how they interact with each other, humans, and the environment. In her free time she enjoys surfing, cooking, and reading.

Elie is a postdoctoral fellow in the Romesberg lab at The Scripps Research Institute in La Jolla, CA. He is interested in synthetic biology, expansion of the genetic code and microbiology. In addition to science, he enjoys surfing, camping and spending time outside.