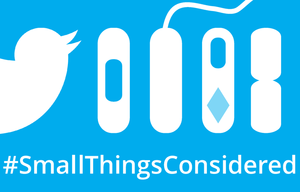 Each spring the Department of Microbiology and Molecular Genetics at UT Houston goes on our annual departmental retreat to Camp Allen for science, recreation, and festivities. After the first day of student and post doc talks we have our dinner and a key-note speaker (this year we had a great talk from Tina Henkin from OSU).

Then, before the ever-popular 'social time' that extends into the wee hours, the first year students are responsible for running roughly an hour of 'Science Fun Time'. Typically this consists of competitive games that may try and work in ways to embarrass professors, and always features a lot of laughing. This year they did a version of Pictionary with microbiology and molecular genetics themes.

The first years then finished 'Science Fun Time' with a PowerPoint presentation of If Microbes Could Tweet... Prior to the retreat, they solicited department members to contribute humorous samples of Twitter messages that a microbe would compose were they capable of tweeting. The presentation displayed all the anonymous submitted entries, reproduced below for your enjoyment. Some are a little esoteric, but many should be clear to anyone with some microbiology knowledge.

If you know all about Twitter, you can skip this paragraph and scroll right on down to the tweets! For those who may be unfamiliar, Twitter is a social networking site that allows users to post and read short 140-character messages (tweets). With such a short length limit these tweets succinctly convey a bit of news, a random thought, or a state of emotion at a particular moment in time. A hashtag (#) before a word or phase allows users to group and easily find posts of related topic or theme, and can often take a form of literary irony, or simple sarcasm. The @ sign is put before a username (handle) to identify and 'tag' that user's account so they get notified the post is there. In addition to an official Twitter handle, users have a regular display name. Many thus choose to use their real name for the display, and something else for their handle (e.g. Robert Koch @PostulatePunk).

So now we want your ideas for If Microbes Could Tweet... Our department tended to pick microbes that we use in house as model organisms.  But of course there are many more out there, perfect for some creative fun. So what would your favorite microbe use as its handle, and what would it tweet about its lifestyle and associates?

You can use this template to create your own tweets for your microbe(s) of choice. You can then post them below in the comments. Or if you have your own Twitter account, tweet your ideas with attribution to the microbe and #microbialtweets, for example:

Daniel is a postdoctoral fellow in the Margolin Lab in the Department of Microbiology & Molecular Genetics at the University of Texas, Houston Medical School. He also teaches as an adjunct professor at the University of Houston-Downtown in the Department of Natural Sciences. In addition to science, he enjoys reading, writing, and film. He can be found on Twitter and his book reviews at Reading 1000 Lives or on Goodreads.