The Awesomest Thing in Biology

Figure 1. Schematic drawing of a Paramecium sp. showing the variety of structural components found in this sophisticated protist. Source

So says a blogger by the name of Psi Wavefunction regarding an eye-like structure of some protists called the ocelloid. She wrote this in a now defunct blog eponymously called The Ocelloid. I couldn't agree with her more. The ocelloid is the structural and functional equivalent of the sophisticated eye of metazoans — and occurs in an unicellular organism! If you can think of anything that is "awesomer" than that, please let me know.

In the parade of startling facts of biology, one that stands out is the variety of morphologically complex structures made by the protists. Some have a mouth, a gullet, a bladder-like contractile vacuole, an anus, one of a variety of organelles of locomotion including some that look like legs, and yet other complex structures (what, no brain?). This begs the question: why did they not go the multicellular route? What more can unicellular organisms achieve? 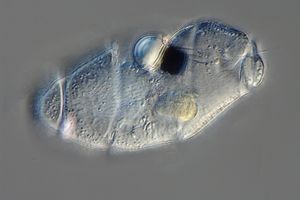 Figure 2. The dinoflagellate Winowia sp. showing the ocelloid with its lens. Source

But even in this wonderland, the ocelloid takes the cake (even though my spellchecker keeps changing it into "ocelot"). Being a miniature likeness of the vertebrate eye, it attains extremes of biological intricacy. Darwin considered the eye to be hugely complex ("... of extreme perfection and complication"), although not irreducibly so. He wisely noted: "I may remark that, as some of the lowest organisms, in which nerves cannot be detected, are capable of perceiving light, it does not seem impossible that certain sensitive elements in their sarcode should become aggregated and developed into nerves, endowed with this special sensibility". ("sarcode" is an old term for the protist cytoplasm). The repeated evolution of the eye from a primitive light-sensing device has been convincingly discussed. What is remarkable about the ocelloid is that it represents a colossal jump from a simple photoreceptive layer one finds in many unicellular organisms to a remarkably intricate structure — still within a unicellular organism. The ocelloid is found in some dinoflagellates only and is indeed a unique structure in nature.

The ocelloid's anatomy tells all. It is a roundish body about 20 µm in diameter (roughly 1/5 to 1/10 the length of the cell that bears it), endowed with a cornea-like cover, a prominent lens (called the hyalosome) bounded by iris-like constriction rings, and a complex retina-like body that is concave in shape. You will agree the analogy to a metazoan eye is startling, even if its diameter is nearly 1000 times less than that of the human eye. It makes you wonder if these organisms may develop cataracts in old age! 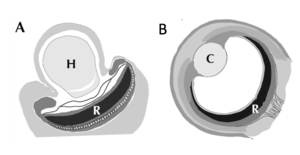 A new paper from labs in Japan, Switzerland, Taiwan, and Saudi Arabia goes into detail regarding the structure, function, and evolutionary origin of the ocelloid. The retinal body gets particular attention. This "organ" consists of an array of parallel lamellae that are ~40 nm thick in the light and ~50 nm in the dark. The structure resembles the thylakoids, the photosynthetic stacked membranous compartments of chloroplasts and cyanobacteria. The number of lamellae increases in the dark, as does the surface area of the retinal body itself. Thus, the ocelloid responds to light conditions although, oddly perhaps, the cells that bear it are not photosynthetic and lack chloroplasts. It remains to be seen whether the ancestor of the ocelloid-bearing dinoflagellate was a photosynthetic microbe that eventually donated its chloroplast to become the retinal body.

In many organisms, the cytoskeleton is involved in changing the conformation of photoreceptors in response to the light. Here, actin is found only in the retinal body and its changes in its morphology are inhibited by cytochalasin B, an inhibitor of actin polymerization, which suggests that actin is involved in the response to light. Actin is not found in the lens, which is thus unlikely to change shape. To complete the picture, does the ocelloid contain light sensitive pigments? Indeed it does, in the form of rhodopsin. By in situ hybridizations with probes to its mRNA, the authors found a rhodopsin-like gene in the retinal body only, which suggests that rhodopsin-like sequences are translated at this site.

Recapping, the ocelloid has the structural, and likely also the functional, properties of an eye. Notably, it has a light receiving structure and, in front of it, a refractive lens. As shown by micro-optometry measurements, the lens facilitates light perception in the dim light habitats of these dinoflagellates by concentrating the light on the receptor surface. Just why they like such light conditions is no quite clear. 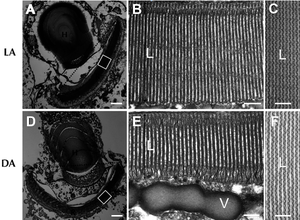 Where does the ocelloid come from? Like most respectable organelles, it contains DNA (which, best I can tell, still awaits sequencing). Other evidence for this? The ocelloid is surrounded by a double set of membranes, can be seen dividing, and its retinal body has a thylakoid-like structure likely derived from a chloroplast. The rhodopsin gene appears to be of bacterial origin, hinting that it was acquired by horizontal transmission, possibly from a bacterial ancestor. It is thought that the ocelloid increased in complexity during the evolution of these dinoflagellates. For studies of the molecular phylogeny of this group, see here and here.

Why have these dinoflagellates gone to all this trouble? What do they want to 'see'? The answer is not clear. This group of microalgae is not photosynthetic, so they are not looking for light to support an autotrophic existence. Like other protists, they have embarked on extremely sophisticated evolutionary ventures. This particular group, the Warnowiids, have other extraordinary structures besides the ocelloid, structures such as a "piston" — a long posterior 'tentacle' that rapidly contracts and expands, presumably for cell motility — and nematocysts — ejectable barb-like structures used by jellyfish, corals, and sea anemones to capture prey.

The lesson? I suppose that this story of miniaturization pushes the limits of the awesome things that living organisms can do. So much for thinking of unicellular organisms as being "primitive". And yet the question still haunts one: why did these multitalented protists not follow the multicellular path?

This subject was discussed on the podcast This Week in Microbiology #103: The battle for iron.