The authors were members of the 2015 UCSD/SDSU Integrative Microbiology Graduate course, organized by Doug Bartlett and Elio Schaechter.

In a recent class, we discussed an exciting paper about a new group of Archaea that just may be the "missing link" between prokaryotes and eukaryotes. Spang and colleagues identified a novel candidate archaeal phylum, the Lokiarchaea, which by phylogenomic analysis forms a mo­no­phy­le­tic group with eukar­yotes. Their genomes "encode an expanded repertoire of eukar­yotic signature proteins suggestive of sophisticated membrane remodeling capabilities". These organisms might have played a role in the original endosymbiosis that gave rise to the eukaryotes and their evolution. 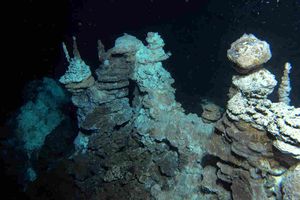 Loki's Castle, the field of deep sea vents bet­ween Norway and Greenland, is home to sedi­ments containing DNA from the newly dis­cov­er­ed archaea. Credit R.B. Pe­der­sen/Centre for Geo­bio­logy, Bergen, Norway. The vent field was given the name Loki's Castle as its shape re­min­ded its discoverers of a fantasy castle. The re­fer­en­ce is to the ancient Norse god of fire and trickery, Loki. Source

The endosymbiotic theory of eukaryotic origin hy­po­the­si­zes that eukaryotes evolved from prokaryotes that 'endo­sym­bio­sed' other pro­kar­yo­tes. These ingested pro­kar­yo­tes are thought to have been proteobacteria and to have evolved into the present mitochondria. In keeping with this notion, mitochondrial genes are phylogenetically clo­se­ly related to those of the Rickettsiales (Al­pha­pro­teo­bac­te­ria). In a second 'big event', cyanobacteria are thought to have been 'endosymbiosed' by early eukaryotes and to have evolved into chloroplasts. But who is the pro­kar­yo­te that engulfed another prokaryote and acted as its host in the first place? Was it a lokiarchaeon?

We decided to propose what we would like to learn fur­ther about the Lokiarchaea. Here is a list of our quest­ions, and yeah!, the answers we instantly got from Thijs Ettema (TE), corresponding author of the paper we discussed in class: