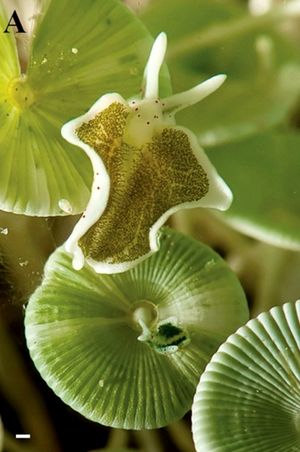 Ah, those thieving sea slugs! The sacoglossan slugs are marine master moochers that suck the contents of the algae they feed on and carefully digest them except for the chloroplasts, which they enslave as their own. And they become green in the process. In honor of this way of life, the process is called kleptoplasty (a topic covered before in these pages). The stolen chloroplasts reside in the cytosol of digestive gland cells and retain their ability to photosynthesize for periods of months. Do these slugs go from being animals to becoming autotrophs like plants? Read on.

At this point, you may be entitled to conclude that the slugs enjoy the sugars made by the photosynthesis by the plastids. It turns out to be more complicated, be­cau­se the slugs survive for months in the dark or when trea­ted with the photosynthesis inhibitor, the algaecide and herbicide monolinuron. Surprise surprise, the reason for kleptoplasty is not to become an autotroph but, in a fashion most pedestrian, to use the plastids as a food source. As the authors say: "Plastid longevity in LtR (long term retention) sacoglossan slugs remains an interesting phenomenon, but the present results prompt a shift in emphasis from viewing the kleptoplasts as green solar panels towards viewing them as green food reserves".

So, these may not be "solar-powered slugs", but they retain their fascination nonetheless. Thus, their ability to retain photosynthetic ability presents a problem. The photosynthetic apparatus of higher plants has a high rate of protein turnover and requires the activity of nuclear genes for its maintenance. The reason is that one of its components, protein D1 of photosystem II is labile be­ing prone to photodamage, thus needs to be replenished frequently. You may think that this is done by transferring some algal ge­nes to the slug's nucleus, but this is not the case. No algal ge­nes are found there (at this point, the authors of a relevant recent paper say: "In search of an explanation for kleptoplast longevity in LtR sacoglossans, we revisit square one"). Instead, the plastids carry a gene for the D1 quality-control protease FtsH. This gene is encoded in the nucleus of land plants, but is found in the plastids of algae. The authors propose that "by bringing along their own replenishable supply of FtsH, these plastids might be better able to service photosystem II by removing the damaged D1 protein in kleptoplasts. Hereby, they are better equipped for an extended life in a foreign cytosol than plastids that are dependent upon FtsH that is nuclear en­coded and must be imported".

This is interesting all right, but we feel deprived of a better story. Don't we miss the possibility that in a single symbiotic step, an animal became a plant?