Autoendoliths: The Architects of the Deep 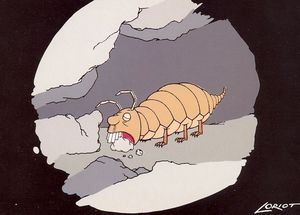 The submersible's headlights shine brightly into the water, illuminating a patch of the seafloor with a hazy glow, like a car moving tentatively over a snowy mountain pass. In front of us, white patches of craggy rock extend upward, decorated with hardy corals and colorful microbial mats. In the distance, we spot a column of rising bubbles and move in for a closer look, the robotic arm poised and ready for some geobiological prospecting.

The outcrop we're investigating (Fig. 2) is Hydrate Ridge, the name given to a mound of carbonate rock a hundred meters tall that is one of the best-studied methane seeps in the world. Formed by the breakdown of organic goo deep beneath the seafloor or microbial reactions closer to the surface, methane percolates upward and into the shallow subsurface. There, most of it — roughly 80%, based on previous work — is consumed through a beguiling process known as the anaerobic oxidation of methane (AOM), an intricate metabolic coupling between archaeal and bacterial partners that operates at the edge of energetic feasibility. Methane and sulfate are biologically converted to sulfide and bicarbonate, the latter of which precipitates, forming the wall of rock just outside my viewport. 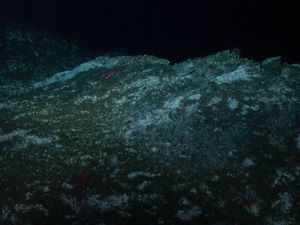 And Hydrate Ridge is no oddity: similar features extend southward along the convergent plate boundaries of the Americas, while others have been described in distinct geological settings like the Gulf of Mexico and the Atlantic Ocean. One study off the coast of Costa Rica spotted mounds and methane seeps every four kilometers, suggesting that methane seepage and carbonate mounds impinge in a direct way on the Earth's carbon cycling and climate dynamics.

Biological AOM has been an area of active research since its elegant discovery in the early 2000s, but most studies collected samples from the thin veneer of sediment coating the seafloor, leaving the carbonate rocks — which represent the volumetric majority of many seep systems — largely unexplored. In a recent study, our team demonstrated that these structures retain metabolically active microbial communities, a finding that broadens the range of methane-scrubbing organisms and exposes seafloor carbonates to be an important sink for methane, a greenhouse gas considerably more potent than carbon dioxide.

The revelation of endolithic (rock-hosted) AOM raised intriguing new questions about how microorganisms interact with the geosphere. Methane is converted to bicarbonate, much of which is incorporated into carbonate rock (as demonstrated with isotopic evidence), and these precipitation products form solid mounds that house their creators. And remarkably, the microbes remain metabolically active, at least in the cases we've studied at Hydrate Ridge. 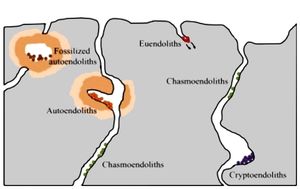 Figure 3. A schematic diagram demonstrating relative locations and microbe–rock re­la­tion­ships of endolithic organisms. Previously formed solid rock is in light gray, while white areas indicate conduits and pore spaces. The distinct types of endoliths are shown with colored circles, including the newly formalized autoendoliths, whose metabolism results in rock formation (indicated by the orange shading suggesting the integral role of metabolic by-products in rock precipitation). Source

Endoliths have traditionally been viewed in one of two contexts. Active rock degraders — a subcategory known as "euendoliths" that include limestone-boring cyanobacteria can adjust localized chemical equilibria to dissolve rock. Alternatively, passive inhabitants seek energy or environmental stability from the rock-bound lifestyle — groups referred to as "chasmoendoliths" or "cryptoendoliths" depending on the structural nuances of the habitat (Fig. 3). But microbes that build the rock structures in which they live? That seemed to be something else altogether.

Using the carbonate-hosted methanotrophic microbes of Hydrate Ridge as a type case, we have defined a fourth flavor of endolith: the "autoendolith". For full membership, applicants must fulfill three criteria:

Of course, the organisms responsible for biological AOM and seafloor carbonate architecture have been known for years, the subject of hundreds of mechanistic and –omics based studies. It is the functional categorization that is new here, not the detection of the microbes involved or the process itself. But such descriptive mental models help us appreciate the connections between seemingly discrete components and offer a new vantage point on phenomenological questions.

Autoendolithic life is in some ways a confounding long-term strategy. Play the tape forward, and you come to an unsavory conclusion: with unchecked methanotrophy and mineral precipitation, conduits in the rock become occluded, potentially entombing the microbes and starving them of substrate and nutrients. However, a sustainable existence may be possible. Properly balance the metabolic rate against seep fluid flow, and products could be swept away from the microbes to precipitate elsewhere. Alternatively, excreted metabolites could adaptively maintain sufficient permeability by discouraging mineral nucleation or dissolving previously formed structures. These potential feedback mechanisms are purely speculative at this point, but this is an intriguing realm of future work that has industrial, medical, and environmental implications.

Remarkably, evidence of autoendolithic activity may be preserved over millions of years. Reading the geochemical, isotopic, microbiological clues in ancient rocks is a nuanced skill, one that Jörn Peckmann, a Professor at the University of Vienna, has mastered. In the Marmorito limestone collected in northern Italy, Peckmann has identified distinct carbonate phases that bear the isotopic signatures of methane-derived carbon. The arrangement of these minerals, as well as the preservation of biomarkers indicative of AOM organisms, suggests that the limestone is attributable to autoendoliths and that this rock-building metabolism is not a new development.

The full extent of the autoendolithic lifestyle — is this a common mode of rock synthesis or a boutique metabolic oddity? — remains to be seen. But it does broaden our appreciation for geobiological possibilities, signifying yet another example of how unseen life may shape the world in ways we rarely consider. 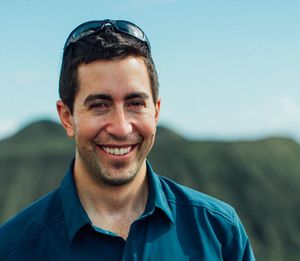 Jeffrey Marlow is a PhD. Candidate in the lab of Prof. Victoria Orphan at the California Institute of Technology in Pasadena, CA.