We are taking our customary two week vacation. Do you think we deserve it? Well, we do! See you July 13th. Read more →

by Christoph Weigel | In 2008, a team of 20 scientists lead by Dylan Chivian published their finding of a motile, spore-forming, strictly anaerobic, autotrophic bacterium of the Firmicutes family in fracture water (60°C, pH 9.3) collected at a depth of 2.8 km in the Mponeng gold mine. This mine is located... Read more →

It's About Time to Consider Osedax

by Christoph Weigel
Way back in 2004, Rouse, Goffredi & Vrijenhoek published their finding, during deep-sea explorations, of large colonies of two mouthless and gutless worm species on the bones of a gray whale carcass at a depth of ~3 km in Monterey Bay, CA. They named the two Osedax rubiplumus and Osedax frankpressi, respectively, and found, by phylogenetic analysis... Read more →

Yina Cobián, Alan Du, Kanika Khanna, Neeraja Vegesna, Chunghoon Woo, and Asami Yamamura | In a recent class, we discussed an exciting paper about a new group of Archaea that just may be the “missing link” between prokaryotes and eukaryotes. Spang and colleagues identified a novel candidate archaeal phylum, the Lokiarchaea, which... Read more →

by Elio
As is our custom, here is a listing of posts from the last half year, lightly annotated... Read more →

by Elio | Ah, those thieving sea slugs! The sacoglossan slugs are marine master moochers that suck the contents of the algae they feed on and carefully digest them except for the chloroplasts, which they enslave as their own. And they become green in the process. In honor of this way of life, the process... Read more →

This Week in Microbiology #105: Real bugs with legs

On This Week in Microbiology, the microbiological safety of herbs in the United Kingdom, and how a peptide from the milkweed bug binds the ribosome and inhibits bacterial protein synthesis. Read more → 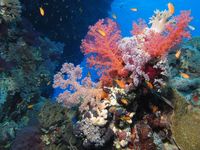 by Antonia Darragh | One-on-one relationships are frequent in coral reefs. Most corals house photosynthetic algae, for example, in symbiotic relationships that allow for intimate and cyclic exchange of sustaining compounds in a nutrient-poor environment. The coral benefits from the products of the algae's photosynthesis, such as sugars, while the algae... Read more →

By David Collins
Do we know of a bacterial taxon that has gone extinct?
Read more →