« It's About Time to Consider Osedax | Main | Vacation » 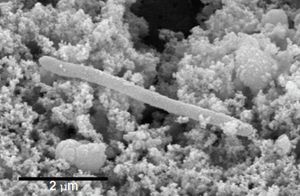 Figure 1. Scanning electron micrographs were taken of microscopy sample #1 from borehole MP104 located 2.8 km below land surface (main page), and of a sample from a different mine, 648 meters down in borehole D8A (here), where D. audaxviator is also the predominant organism. Only one morphotype was observed at both locations. The tiny globular objects seen in the micrograph (here) are presumably sili­cates, which have been found to precipitate upon cooling after sample collection. Source

In 2008, a team of 20 scientists lead by Dylan Chivian pub­­lished their finding of a motile, spore-forming, strictly anaerobic, autotrophic bacterium of the Firmicutes fa­mi­ly in fracture water (60°C, pH 9.3) collected at a depth of 2.8 km in the Mponeng gold mine (Fig. 1). This mine is located south-west of Johannesburg, South Africa within the Witwatersrand basin (150 x 300 km), and currently the deepest mine in the world (operating depths range from 2.4 km to more than 3.9 km). "Finding" is the ap­pro­pri­ate term here since the authors did not actually isolate Desulforudis audaxviator, as they named it, by growing it in the lab. Instead, they filter-collected its cells (3.3 x 104 cells/ml) from a copious 5,600 liters of fraction water and sequenced the obtained DNA, a scanty 40 µg of high-mo­le­cular weight DNA. Much to their surprise – and to their delight, probably – they found >99.9% of the sequence reads belonging to one single species, whose genome they assembled completely without having to resort to (tedious) metagenomic binning. They had not only found the (so far) deepest soil-dwelling bacterium but also a unique 'one-species' ecosystem. Their fil­te­ring technique did not catch sub-micrometer bacteria or phages, though.

As if these 'records' were not enough, yet another surprise was waiting for Chivian and col­la­bo­ra­tors. Isotopic analyses of traces of noble gases in the fracture water at the Mponeng mine sample site suggested that the fluid that houses D. audaxviator last mixed with water from overlying aqui­fers at least ~3−4 Ma (=million years) ago. This earned D. audaxviator the dubious moniker of "the loneliest bacterium" but shows that living in consortia is not the only successful evolutionary path for bacteria, even in the long run. Desulforudis is not a hermit species, confined within the Mponeng mine, as its ribotype was also predominant in samples (>1.5 km depth) from 4 other lo­cations in the Witwatersrand basin. But not only that! One report localized D. audaxviator ­– or a very close relative – in Outokumpu, Finland, again in a depth of ~1.5 km, and one yet un­con­fir­med study claims to have found it in boreholes 900 m deep near Death Valley, CA. Thus, De­sul­fo­ru­dis seems to get around a lot. I can't suppress the notion that plate tectonics apparently acts much like a giant Drigalski spatula – a venerable tool from 20th century microbiology lab – that inoculates the Earth's crust all over and thoroughly, that is, deeply, with whatever soil mi­cro­or­ga­nisms come in its ways.

But back to the picture. Note that the slim, elongated D. audaxviator cell shown in Fig. 1 (0,3 x 4.8 µm) has a surface-to-volume ratio that is roughly twice that of a spherical cell of the same volume (somewhat lower if the cell shown were shortly before dividing). A high surface-to-volume ratio is critical for opr optimizing the flux of nutrients/waste products into and out of the cell, and clearly an advantage when thriving in a nutrient-poor environment; the Alphaproteobacterium Pelagi­bacter ubique employs the same 'trick' in the open ocean. 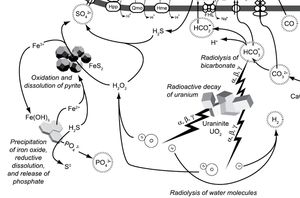 The 2.35 Mb genome of D. audaxviator codes for 2,157 proteins (and 45 tRNAs, and 6 rRNAs), roughly 1,000 ge­nes more than found in two other self-sustaining bac­terial species, Prochlorococcus marinus (~1.6 Mb) and Pelagibacter ubique (~1.3 Mb). There are no signs for streamlining in the D. audaxviator genome and its size well within the range of other genomes from the Clos­tri­diales branch, mostly soil-dwelling anaerobes, of the Firmicutes phylum. Taken everything together, the ge­no­mic analyses revealed the presence of complete path­ways for amino acid synthesis – all 21, that is, including selenocysteine – , for sugar metabolism, for nitrogen and phosphorus uptake, and for flagella and endospore formation. Sure enough, also prophage remnants are present in the genome, as are CRISPR/Cas sequences and transposons. And, finally, extra copies of an archaea-type sulfate adenylyltransferase and of a H+-translocating py­ro­phos­phatase point to horizontal gene transfer (HGT) from Archaea in the past. Everything is there, as if pur­po­se­ly compiled for a comprehensive (imaginary) textbook "The Bacterial Genome; Chapter IV. Anaerobes".

By combining geochemical data from the sample site with their genomic analyses, Chivian and collaborators tentatively reconstructed the complete energy metabolism of D. audaxviator: "Energy and material for the ecosystem comes from the radiolytic production of H2 and reactive H2O2, which in turn reacts with H2S to produce SO42‒ or with pyrite (FeS2) to produce SO42‒ and Fe(OH)3 as detailed by Lin et al., and shown experimentally by Lefticariu et al. (Fig. 2). The H+ pro­duced by the cell and released by oxidation reactions dissolves calcite (CaCO3) releasing Ca2+ and bicarbonate (HCO3‒). The Ca2+ in turn may exchange with NH4+ in chlorite mineral. The HCO3‒ can either be taken up by the putative Na+/HCO3‒ symporter or it may be radiolytically reduced to formate (HCO2‒). All three forms of inorganic carbon may be utilized by the Acetyl-CoA carbon fixation pathway, as well as CO. The H2S produced by the SO42‒ reduction pathway can diffuse out of the cell and, in addition to reacting with H2O2 to replenish SO42‒, can react with the Fe(OH)3 to regenerate SO42‒ and release PO43‒. The Fe2+ released by this last reaction can combine with H2S to precipitate FeS or FeS2". In addition to the well known phototrophic, chemotrophic, and elec­tro­trophic – think of Shewanella growing on electrodes – lifestyles we have now also: a radiotrophic lifestyle. Note that 'radiotrophy' is not confined to prokaryotes, radiotrophic fungi have already been considered here in this blog. In conclusion, microbial physiology has a new 'drawer', another category to characterize the energy metabolism of a creature.

You may wonder about the name given to this remarkable bacterium. The genus name, 'De­sul­fo­ru­dis',  reflects – in the customary Latin – the lifestyle ("reducing sulfur compounds") of the rod-shaped cells (rudda (old norse) = rod). The species name 'audaxviator' is a reference to the 19th century French author Jules Verne and his famous novel 'Voyage au centre de la Terre'. In this novel, the protagonists hasten to descend to the center of the Earth after having deciphered a me­dieval runic inscription describing a feasible route. One half-sentence of this inscription reads: "...descende, audax viator, et terrestre centrum attinges" (descend, bold traveller, ... and you will attain the centre of the earth). You see, also microbiologists are apparently sometimes, umh, ro­mantic... . Less romantic is the notion that one would probably have to grow D. audaxviator in the isotope lab, with uranium in the medium to provide radiolysis. This, however, hasn't been done so far, and formally its name stands as "Candidatus Desulforudis audaxviator" MP104C, therefore.