Relationships between living things are complex; some more than others. Examples of all kinds take place in coral environments. Here is a glimpse into their complexity.

The Good: Mutualism  One-on-one relationships are frequent in coral reefs. Most corals house photosynthetic algae, for example, in symbiotic relationships that allow for intimate and cyclic exchange of sustaining compounds in a nutrient-poor environment. The coral benefits from the products of the algae's photosynthesis, such as sugars, while the algae are provided a protective residence within the coral polyp tissues and utilize the CO2 produced via coral respiration.

One-on-one-on-one relationships can occur in soft coral environments as well, according to a recent article by Yamashiro and coworkers. Growth of the filamentous cyanobacterium Moorea bouillonii (formerly Lyngbya bouillonii), when anchored to the gorgonian coral, Annella reticulata, is enhanced by its symbiotic relationship with the alpheid shrimp, Alpheus frontalis. These snapping shrimp inhabit tunnels that they weave of M. bouillonii filaments. The shrimp's "home" provides food and shelter for the shrimp while the cyanobacteria receive protection from predators. According to unpublished work, these reserachers also observed that the shrimp release nitrogen in a form (NH4) that the cyanobacteria can absorb directly. However, this relationship appears detrimental to the A. reticulata corals. 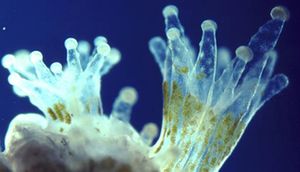 Figure 2. One-on-one symbiosis. Many coral polyps contain photosynthetic dinoflgellates of the genus Symbiodinium. These endosymbiotic algae (the brownish-green regions in this figure) are colloquially referred to as "zooxanthellae" (or "zoox" for short. Animals like corals, giant clams and sponges that symbiotically harbor them are referred to as being "zooxanthellate". Source

More Good (for humans, maybe not for the cyanobacteria)  This 3-way relationship may ultimately prove to be good for humans as well. M. bouillonii produces compounds that are putatively beneficial for our species. Secondary metabolites isolated from this cyanobacterium that appear to have anticancer activity include apratoxins and cyclic lipopeptides with a tertiary butyl group. According to a report by Grindberg et al., apratoxin A interferes with the ability of cancer cells to produce certain cancer-associated receptors. Tidgewell et al. observed IC50‘s of 2 and 14 nM when treating H-460 human lung cancer cells with apratoxins F and G, respectively, and reported preliminary efficacy of the drug in mice. Studies are underway to determine the levels of apratoxins (and other bioactive compounds) produced by M. bouillonii in the presence and absence of its natural symbiotic partners. Maximizing production levels could help to supply the quantities required for anticipated clinical trials.

Figure 3. Organisms involved in a one-on-one-on-one symbiotic relationship and that produce putative natural product drugs. A Moorea bouillonii, a cyanobacterium (aka blue-green alga), being investigated as a possible source of new drug therapies. B The "snapping shrimp", the M.bouillonii symbiotic partner. Source

The Bad  But symbiotic relationships among organisms that call coral environments their "home" can go bad. Increasing nutrient levels by eutrophication contribute to increasing algal populations and can lead to algal blooms that can be devastating to corals and other marine ecosystems (see Fig. 4). A M. bouillonii bloom off the shores of Okinawa, Japan was blamed by Yamashiro and coworkers for declining populations of A. reticulata. These researchers found a 26% infection rate by M. bouillonii in some A. reticulata colonies. As M. bouillonii growth increased on these corals, affected branches would eventually die, potentially from oxygen and/or food deprivation from the "smothering" effect of M. bouillonii growth, or possibly from toxic compounds being excreted by the cyanobacteria. Dead A. reticulata branches eventually break off from the colony. Concentrations of some nutrients, such as NO3 and PO4, were as high as 0.99 µM and 0.09 µM, respectively, in the local environment. These levels closely approach those previously reported to be necessary for algal blooms. Yamashiro and coworkers suggested that M. bouillonii anchoring themselves onto A. reticulata (see Fig. 5) and potentially benefiting from NH4 excreted by symbiotic shrimp may contribute to the presence of year-round blooms. 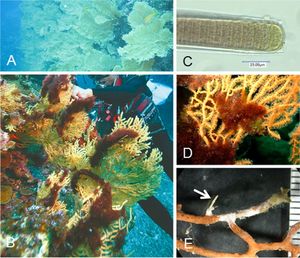 However, other sources of nutrients such as fertilizer run-off and sewage also may contribute to algal blooms. Additionally, strong attachment of M. bouillonii to the stony coral genus Acropora has been thought to be non-harmful to the corals because the attachment was primarily to the calcareous skeletons of dead colonies and not to the living polyps. The relationship between M. bouillonii and these other coral species therefore appear to be commensal. The cyanobacteria benefit from attachment to these coral species because they serve as a surface for creating filamentous mats, while these mats have a negligible affect on the corals. But, Titlyanov et al. previously reported an antagonistic relationship between M.bouillonii and a different stony coral, Porites lutea.

So, does M. bouillonii’s anchorage mechanism change to make it more damaging to certain corals only, including A. reticulata? Could snapping shrimp have effected such a change? Or could another player be involved in this intricate symbiotic relationship? For example, are the zoox involved? Closer examination of M. bouillonii’s attachment to A. reticulata, as compared to its attachment to other corals, may provide further insights into possible differences in the kinds of relationships between this bacterium and its different partners.

The Future: Ecological Facilitation  Yes, it takes all kinds of dealings to make a healthy coral environment. But in recent years a heightened imbalance in coral environments has contributed to widespread coral diseases and bleaching (click here for the International Coral Reef Initiative website). The demise of the corals can, in turn, lead to dramatic changes to marine ecosystems that took thousands of years to become established. Not only algal blooms but also the dissolved organic matter they release that may promote local growth of pathogenic microorganisms, pollution, reef fishing, and changes  in pH and/or ocean temperature have all been implicated as causes or effects of these imbalances. But the direct etiology of coral decline is unknown and may, as suggested by NOAA, have its roots in factors associated with the highly dynamic coral system. As of early 2015, 22 coral species were listed as "threatened" according to requirements of the Endangered Species Act (ESA). Annella reticulata is not currently listed. But if M. bouillonii populations continue to increase, this soft coral soon may become a member of this distressing club.

What can you do to help protect corals and keep the various relationships among organisms that inhabit them healthy? Leave the beach/ocean cleaner than you found it. Pick up plastic bags that could attach to corals and suffocate them. Support marine ecological monitoring, research and restoration projects like NOAA's National Ocean Service. Support legislation protecting corals such as the acts creating Marine Protected Areas.

Antonia Darragh is a student of molecular biology in the Graduate Program of Biological Sciences at the University of California, San Diego.