« This Week in Microbiology #108: Vaccine in the time of cholera | Main | The ASM President Speaks: "Microbes Touch Everything" » 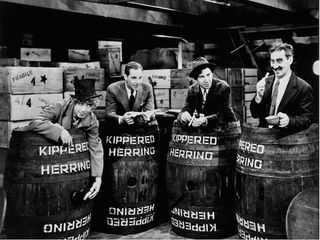 Something’s fishy . . . stowaways on board! Source

Life is full of tough choices. Some of the more dramatic of them play out in the world of bacteria and the phages that infect them. Take E. coli for instance. Under con­di­tions of stress, it has to decide whether to try to repair the damage, or commit hara-kiri for the sake of the com­munity. Why would E. coli choose self-destruction over an attempt at repair? One reason is that if a phage is stowed away, the calculus of risk changes significantly. Hannah Engelberg-Kulka and Sathish Kumar describe the ways in which a phage protects its own interests when its E. coli host encounters risky situations, highlighting in the process the multi-faceted role of a certain phage protein, λRexB.

The stowaway in our drama is, of course, none other than that most famous of phages, phage λ. Being temperate, λ has options: a lifestyle of viral replication followed by lysis of the host cell, or lysogeny. In lysogeny, the phage λ genome integrates into that of its host bacterium, where it rests peacefully in its chromosomal bunk, harmlessly replicating along with its host. However, phage λ has to sleep with one eye open — it needs to know if its meal ticket is in dan­ger. If it senses dan­ger, it launches into its lytic phase, excising from the bacterial chromosome and behaving in a most selfish manner. How does phage λ sense impending danger? Through one of the phage pro­teins, the famous repressor λcI — the first described example of negative regulation of tran­script­ion. Binding of λcI to regions of the phage genome inhibits transcription of the genes needed for lysis, in this way maintaining the lysogenic state. But λcI also serves to alert the sleeping phage to danger, by being sensitive to a signal that is part of the bacterial SOS response.

First, a bit about this SOS response. When DNA is damaged, some of it becomes single stranded, signaling that DNA damage has occurred. How? By activating a bacterial protein called RecA, which in turn cleaves a bacterial repressor, LexA. This protein normally keeps genes of the SOS pathway from being expressed by binding to "SOS boxes" upstream of the genes. Cleavage of LexA now results in activation of the so-called SOS genes, whose protein products are involved in multiple damage-control functions such as arresting the cell cycle and repairing DNA.

The catch is that the phage has evolved a pretty clever adaptation: its lysis repressor, λcI, is also cleaved by RecA. This tactic allows a sleeping phage to be roused when the E. coli cell goes into red alert. At the sound of the SOS alarm, λcI is removed from its post, and the genes for phage lysis are expressed. In the wink of an eye (well, some 20 minutes), hundreds of phages are jumping ship to head out and find other cells to infect — a dismal situation that the E. coli fleet would rather avoid. 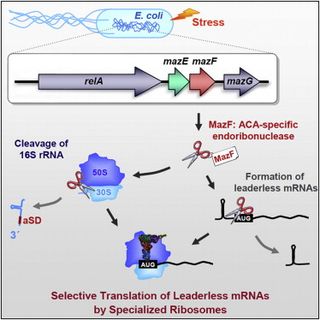 Another option available to the distressed E. coli cell is a phenomenon called programmed cell death (PCD), a genetically programmed process of cellular suicide. PCD in E. coli can be initiated by a toxin-antitoxin system coded by the mazEF locus. Most bacteria carry such a locus and others on their chromosome. The toxin MazF is a stable protein, an endonuclease that uses a two-pronged tactic to alter both ribosomes and mRNAs. What happens is that an alternative set of mRNAs is expressed in place of the usual ones. How? One, this nuclease chews off the anti-Shine-Dalgarno sequence at the 3' end of the 16S rRNA in the ribosome, thereby preventing translation initiation of canonical mRNAs (some of which may inhibit synthesis of PCD proteins)(Figure 2). Two, the toxin cleaves at sites upstream of the start codons of specific mRNAs — including effectors of the PCD pathway — creating leaderless transcripts. Remarkably, these transcripts are not useless but are selectively translated by the jerry-rigged modified ribosomes. The products of this unusual method of translation include proteins that are involved in cell death and others that are involved in cell survival.

Under normal circumstances the bacterial cell does not want the toxin on the loose, reconfiguring the translation machinery. That’s where the antitoxin MazE comes in. The antitoxin keeps the toxin inactive by binding to it tightly. However, the antitoxin is unstable, hanging around only about a half hour before being degraded by a protease, ClpPA. But not to worry — when the cell is healthy, the antitoxin is continuously replenished, preventing the toxin from acting. As you might guess, however, any stress to the cell that blocks transcription and translation — starvation, antibiotics, heat shock — will result in an imbalance between the toxin and antitoxin. In other words, the antitoxin will no longer be plentiful enough to keep the toxin in check. The toxin will then pull the death switch, sending the cell down the alternative translation pathway leading to PCD for most of the population, with a small subset surviving. 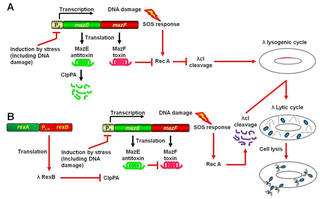 (click to enlarge) Figure 3. λrexB gene is indirectly involved in the lysogenic–lytic switch of phage λ. A. The E. coli toxin-antitoxin module encodes for a stable toxin, MazF, and a short-lived protein antitoxin, MazE, which is degraded by ClpPA protease. Under stressful conditions such as DNA damage, transcription of mazEF is prevented, resulting in insufficient levels of antitoxin. As a result, the toxin MazF is free to inhibit the SOS response. The repressor cI of phage λ remains intact, and λ remains in its lysogenic cycle. In this way, the induction of mazEF by DNA damage prevents phage λ from "going lytic." B. λRexB allows the phage to switch to the lytic cycle by inactivating ClpPA. In the absence of ClpPA activity, the MazE antitoxin remains intact and antagonizes the MazF toxin. With the toxin inactivated, the recA-lexA-mediated SOS response takes place in response to DNA damage. The action of the SOS response leads to the degradation of the λ repressor cI, resulting in the switch to the lytic cycle, and the eventual lysis of the host cell. Source

While such altruism serves the E. coli community well, it is at odds with the interests of the phage. Should the E. coli cell choose martyrdom, the sleeping phage will go down with the ship; game over. This is where the phage protein RexB enters the picture, and in a somewhat novel role. Its better-known role involves blocking infection of the cell by other phages (superinfection exclusion), and protecting phage λ from their effects. This function requires the co-expression of rexB and an adjacent gene, rexA. Suspicion that RexB may have an additional role comes from the fact that phage λ has a promoter that allows rexB to be expressed independently of rexA. Also notable is the fact that in lysogenized cells, rexB is one of the few phage λ genes that is expressed.

So how does λRexB protect the phage from "going down with the ship" if E. coli chooses self-destruction?  The strategy is to ensure that the antitoxin somehow remains plentiful even when stress conditions decrease its expression.  λRexB achieves this aim by inactivating ClpPA, the protein that chews up the antitoxin. The antitoxin can then continue to inhibit the toxin, and the induction of PCD is thwarted. However, there’s an additional bonus to λRexB’s actions. The SOS response is inhibited by the proteins produced by the MazF-induced special translation machinery. This would prevent phage λ from going lytic. With λRexB keeping the toxin in check, however, the λcI repressor is cleaved and mayhem ensues on the path to lysis: the sleeping phage is shaken awake, after which it pilfers the cell's resources before replicating like mad and bursting from the cell in a blaze of glory.

Two entities with competing interests locked in close quarters, undergoing life-or-death situations: this is the stuff of high drama. This particular rendition reveals a dual role for λRexB, and one that straddles both replicative phases: λRexB acts as a protector of lysogeny and indirectly as an enabler of lysis. Additional twists of plot are sure to be revealed as researchers continue to indulge their fascination with this tragic pair.