« Swapping Symbionts Enabled Mediterranean Lichen to Conquer the Arctic | Main | This Week in Microbiology #108: Vaccine in the time of cholera » 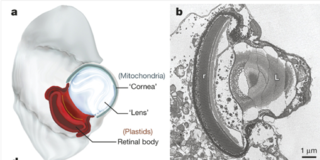 Figure 1 a, Illustration of the warnowiid dinoflagellate Nematodinium showing the basic components of the ocelloid with their putative organellar origins. b, TEM of the ocelloid of Erythropsidinium, including the lens (L) and retinal body (r). Source

Not long ago, we posted a piece entitled "The Awesomest Thing in Biology" (a title we borrowed from this site), in which we celebrated the mind-boggling complexities of the ocelloid, an organelle that closely resembles the vertebrate eye – in a unicellular protist! It turns out that further surprises come our way.

The ocelloid, the proud possession of certain rather un­com­mon plankton dinoflagellates called the warnowiids, is made up of structural analogues of the cornea, lens, iris, and retina of the eyes of multicellular organisms. We had hailed a paper that showed the similarity of the ocel­loid retina to the thylakoids of photosynthetic organelles, thus revealing its plastid origin. This structure was shown to contain a bacterial-like rhodopsin, which points to its endosymbiotic origin. Now, a new paper by Canadian, Japanese, and Saudi authors extends our knowledge of the cytological complexities of this amazing organelle as well as its evolutionary origin. It turns out that the cornea is con­struc­ted from modified mitochondria and the retinal body, as seen earlier, from plastids. To confirm these conclusions based on microscope observations, the authors sequenced the DNA of the retinal body, finding that it contains a much higher proportion of plastid photosynthetic genes than the cell as a whole (keep in mind that these dinoflagellates are not photosynthetic but lost this skill long ago). The conclusion: the retinal body’s original plastid arose from an ancient endosymbiosis with a red alga. Thus, the ocelloid is a chimeric structure originating from multiple endosymbiotic events. The ocelloid structure has further surprises. Using a tech­nique called FIB-SEM tomography, these researchers de­termined that the outer membrane of the "corneal" mi­to­chon­dri­on is fused to the retinal-body plastid, making a complex network. As to the role of the ocelloid, data in this paper suggest that it may be involved in the de­tec­t­ion of other dinoflagellates that the warnowiids may prey on. The light detected may come from the fact that some species are bioluminescent or from the polarized light reflected by the highly condensed state of their chro­mo­so­mes. Probing into these possibilities would require culturing these organisms, something that they have eluded so far.

Doesn't the ocelloid puncture a hole in our previous no­tions? As the authors say: “The anatomical complexity of single-celled organisms may be limited by the components available for differentiation, but the ocelloid shows that pre-existing organelles can be assembled into a structure so complex that it was initially mistaken for a multicellular eye. Although mitochondria and plastids are ac­know­led­ged chiefly for their metabolic roles, they can also be building blocks for greater structural com­ple­x­i­ty.”