« Vacation | Main | This Week in Microbiology #107: The battle in your bladder »

Note: If you are unfamiliar with terms such as lysogeny and prophage, please see my earlier post here. 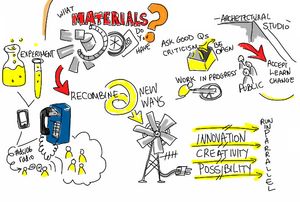 Figure 1. Modified from this source

If you were a lysogen, that is, a bacterium carrying a pro­phage nestled in your chromosome, you might be hos­ting a traitor who will some day turn on you and kill you. On the other hand, you might be carrying the inadvertent donor of valuable genes that will benefit your lineage for ge­ne­ra­tions to come. How so? As you replicate your chro­mosome, you make occasional errors. Sup­pose one such error occurs within the prophage's excisionase gene and inactivates it. Ex­cis­ion­ase is an enzyme that the prophage needs to extract its genome from the bacterial chro­mo­so­me. Without this means of escape, the prophage is at a dead end, its genes stranded as an island within your chromosome. In the course of time, most of those genes will accumulate mutations and degenerate into nonfunctional pseudogenes that are eventually eliminated from your genome. The exceptions are those that are currently useful to you, such as genes that encode virulence factors. These genes will be maintained under purifying selection. All of the prophage's genes constitute potentially valuable hand-me-downs−50, 100, or even more nonessential genes that you can tinker with as you wish and perhaps adapt to your own purposes.

And tinker the bacteria have, some making use in particular of the structural proteins that the phage previously had assembled to construct its virions. Some bacteria have co-opted the virion capsid (see here), some the tail (see here), and still others both (see here). Phage tails offer ex­cep­tional possibilities. They are complex nanomachines with moving parts and multiple capabilities that include target cell recognition followed by attachment and the delivery of nucleic acid and proteins. Some bacteria have taken advantage of this protein delivery capability by co-opting tail components for their type VI secretory system (T6SS). Others seeking the ability to deliver to highly specific targets use modified tails to attack and kill other bacteria. Both contractile (Myovirus) and non-contractile (Siphovirus) tails have been pressed into service. Earlier these weapons were na­med for the bacterium wielding them (e.g., pyocins for those made by Pseudomonas aeruginosa), but now are often given the generic, but more descriptive name 'tailocin'. Tailocins are now part of the toolkit of numerous bacterial pathogens whose strategy depends on the injection of effector molecules into target cells, be they bacterial or eukaryotic. Here is one tailocin tale. 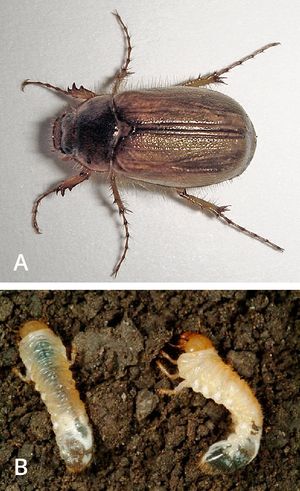 Figure 2. A The adult beet­le, Costelytra zea­­lan­­di­­ca. Photo credit: Bill Bendle. Source. B The beetle larvae known as New Zealand grass grubs.The grub on the right was infected with S. entomophila and will soon die of amber dis­ease, while the grub on the left is unaffected. Source

For this story we travel to the lawns and sheep pas­tures of New Zealand, home of the New Zealand grass grub. These grubs are the larvae of a scarab beetle, Costelytra zealandica. Each year a new generation hatches under­ground in the summer and feeds on the roots of the pas­ture grasses to the detriment of the plants. Although a bane to New Zealand farmers, the larvae are a nutrient-​rich habitat for the enterobacterium Serratia en­to­mo­phi­la. Infection of the larvae with pathogenic strains of S. en­to­mo­phila causes the larvae to stop feeding within 48 h. By 72 h the level of digestive proteases drops sharply and the normally dark hindgut clears, giving the larvae an am­ber coloration and the disease a name: amber disease. These sick larvae can persist for several months in a state of starvation, but eventually the bacteria, having co­lo­ni­zed the hindgut, escape into the hemocoel. Larval death follows soon thereafter.

Like many bacterial pathogens, pathogenic strains of S. en­tomophila carry many of their virulence weapons in a plasmid. One region of the plasmid contains three genes (sepABC) similar to genes that encode toxins used by Pho­to­rhab­dus luminescens to kill their insect hosts. When these plasmid genes are deleted, infected larvae appear normal, but they still cease feeding. So what other genes in the plasmid caused the larvae to stop eating?

As it turns out, a cluster of 18 genes elsewhere on the plasmid are required to halt larval feeding. Several lines of evidence suggest that this region re­pre­sents the modified relic of a prophage. Clue one: a complete lysis cassette is present, including genes for holin and endolysin — the proteins that produce large holes in the cell membrane and attack the cell wall, respectively, to cause lysis. Clue two: five of those genes are evolutionarily re­la­ted to genes that encode tail sheath or base­plate proteins in phage T4 and other Myoviruses. Clue three: another gene encodes a tail fiber protein from avian adenovirus, likely revealing how this phage tail was adapted to recognize a eukaryotic cell. Moreover, the G+C content of the afp gene cluster differs from that of the plasmid, thus suggesting it is a recent acquisition. On this basis, the cluster is called the antifeeding prophage (Afp) and the 153 kbp plasmid is named the Amber Dis­ease Antifeeding Prophage plasmid (pADAP).

(Click to enlarge) Figure 3. Schematic of the afp gene cluster show­ing the associated protein domains as well as the location of the gene for the regulatory AnfA1 protein and its associated ops site. Source

These clues alone are sufficient to accuse afp of encoding a tailocin, but additional evidence supports it conviction. Of the afp's18 genes, 16 have homologs in a gene cluster found on the chromosomes of two tailocin-armed bac­te­ria, P. luminescens and P. asymbiotica. Photorhabdus rou­tinely switches between two personas, one as a mu­tua­listic nematode symbiont and the other as an insect pathogen that delivers its deadly toxins into its hosts by means of tailocins. Expression of the P. asymbiotica gene cluster in trans in E. coli yielded structured particles that, when viewed under the electron microscope, were seen to be Myovirus-like tailocins. This strongly suggests that the 16 homologs in afp also encode a tailocin.

If indeed S. entomophila uses the Afp tailocin as a weapon for infecting grass grubs, the next question would be how does it regulate weapon production during pathogenesis. The answer lies just upstream of the afp cluster in a gene encoding a transcriptional antiterminator of the RfaH family (AnfA1) These are regulatory proteins that bacteria need to make pili, lipopolysaccharide (LPS), and several toxins. They regulate transcription of the operon by binding a short DNA se­quence within or upstream of the affected genes. That short sequence is called the ops for operon polarity suppressor. Binding of the regulatory protein to the ops allows transcription of the ope­ron to continue through a termination site to the downstream genes. Thus, the presence of both the AnfA1 regulatory gene and an ops sequence suggested a possible mechanism for the re­gu­la­tion of afp expression. Researchers tested this by expressing Anf1 in trans in S. entomophila. As predicted, this induced production of Afp particles that, when viewed under the electron mi­cro­sco­pe, appeared to be typical Myovirus-like tailocins. These 'tails' are 83 − 89 nm long and 12 − 15 nm wide, each with 5 − 6 tail fibers attached that are ~33.5 nm long with pads evident at their tips. Moreover, the tail sheath of the particles was in either an extended or contracted conformation, looking much like Myovirus tails before and after chromosome delivery.

One additional clue: following infection by S. entomophila, the larvae stop eating 1 − 3 days before the other amber disease symptoms appear. Putting all of this together, the researchers proposed a model to describe how S. entomophila, armed with its Afp, goes about killing the grass grubs. They suggested that upon arrival in a larval host, expression of the transcription antiterminator is switched on in a subset of the infecting bacteria — the shock troops. This, in turn, 'induces' the Afp in a manner somewhat analogous to prophage induction in lysogens. The afp gene cluster is tran­scribed, which leads to Afp production and synthesis of the holin and endolysin. Cell lysis soon follows, releasing the heavy weaponry — Afp particles that deliver a cargo of anti-insect effectors into larval cells. Thus the shock troops are sacrificed to enable the surviving bacteria to colonize the gut. This scenario, however, has not been demonstrated experimentally, but awaits in­ves­ti­ga­tion along with other questions, such as how recognition of the target cell results in effector in­jec­tion and whether sheath contraction is part of that mechanism. 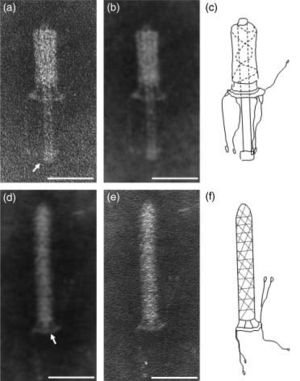 How adaptable might these deadly tails be? Researchers first identified them in Gram-negative proteobacteria, such as Pseudomonas aeruginosa, but they are widely distributed among both the Bacteria and Archaea. Bac­te­ri­al pathogens have also adapted them for use when in­fecting eukaryotes such as insects and Acanthamoeba. Might a human pathogen acquire a tailocin? Tailocins are sometimes carried on bacterial chromosomes, so­me­ti­mes on plasmids. Either way, they are mobile and could find their way to such a pathogen. What would it take to adapt one to deliver effectors into human target cells? Perhaps not much. The tailocin might arrive as a cassette that includes some of the genes needed to regulate its in­duction and particle production. Switching its target cell specificity to a human cell type might require simply swap­ping in a new protein for the tips of the tail fibers, one that would recognize and bind to the receptor on the new target cell. The avian adenovirus tail fiber protein of the Afp particles shows that this can be done. More chall­en­ging for our innovative pathogen might be to package its existing effector proteins into the new delivery ve­hic­les. Alternatively, an easier solution might be to modify one of the effectors supplied with the tailocin for use in the new context. Already the emerging human pathogen Photorhabdus asymbiotica exploits similarities between the insect and human innate immune systems to successfully infect both, but here using a type III secretion system, not tailocins, for delivery.

Beetles have been around for 280 Ma (= million years), giving the bacteria time to perfect their insect-targeting tailocins. We are new arrivals. How long might it be before a tailocin targets us? Given our similarities to beetles and the ability of bacteria to capitalize on their prophage hand-​me-​downs, it is hard to say.