It is our pleasure to continue our tradition of hosting a few reflections from the president of the ASM. 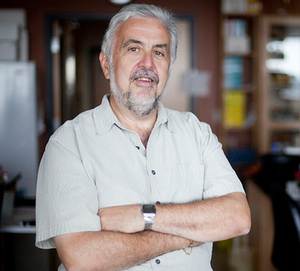 Tim Donohue in his lab. Photo by Matthew Wisniewski, GLBRC. Licensed under Creative Commons CC BY-NC-ND 2.0. Cropped from the original.

As I wheeled my bag away from the Convention Center in New Orleans after the 115th General Meeting, I noticed its ASM luggage tag, which states "Microbes Touch Eve­ry­thing". This simple line is a perfect summary of the im­por­tan­ce of the microbial sciences and the core mission of ASM to promote and advance this field. In history there are many examples of times when the right con­flu­ence of people and technology has led to events that rapidly push back frontiers. Two examples, one old, one of our time: Leeuwenhoek seeing animalcules through his lens and the elucidation of the structure of DNA and the genetic code both transformed science and opened new fields of exploration. The microbial sciences are now poised to enter a renaissance that is based on in­ter­dis­ci­pli­na­ry approaches and new technologies.

In order to take advantage of this scientific moment we must reach out to our colleagues in other fields. At the General Meeting I heard many talks that highlighted the importance of bringing new scientific disciplines into the microbial sciences. Du­ring his opening lecture, Pieter Dorrestein shared his exciting work to understand the activities of microbial communities using mass spectrometry.  He began and ended his talk by noting that he is a chemist, but that his work is in the microbial sciences. Minyoung Chun of the Kavli Foun­da­tion reflected on the foundation's interest in microbiology during the President's Lecture. She noted that Kavli has historically funded researchers focused on astronomy, nanoscience, and neu­ro­sci­ence. In the past year they have held a series of symposia focused on the microbiome because they repeatedly heard from their physical scientists that microbiology is one of most exciting new frontiers and thus is worth exploring. From looking for alien life to connecting the brain to the gut microbiome, microbiologists are now involved in a huge number of other fields. Clearly, our attention to interdisciplinary science must continue to grow.

Parallel to the expansion into the microbial sciences of traditionally separate fields is the boom of new technologies that are making it easier to see the unseen and contribute to understanding the world around us. For decades microbiologists were limited to studying the small fraction of the organisms that were culturable. The development of extraordinary sequencing techniques has enabled us to begin to study the other 99% percent, the microbial 'dark matter' that is all around us. This technology holds great promise for the discovery of new drugs and such needed products as biofuels. Think of CRISPR-Cas as another discovery whose applications hold great promise. The ability to readily move genes into new positions is proving to be a boon to what was called the biotech industry when I was a student.

One of the most obvious areas of study that creates interdisciplinary research and new technology is that of the microbiome. Microbiologists are joining with computer scientists, ecologists, en­gin­eers, imaging experts, plus others to understand the complex ecosystems of the microbes that touch us, or impact our environment in yet unknown ways. These efforts have attracted the at­ten­tion of the White House, which recently sent out a request for an account of the federally-funded work in this area. Microbiome discoveries garner significant attention from the news media and the public as well.

We can work as a community to make a microbial sciences renaissance occur or we can let the opportunity pass us by, slowing down the progress that has been made. If we become too insular, overhype our findings, and allow overly restrictive regulations to impede progress, then we have mainly ourselves to blame. As microbial sciences research becomes more complex and in­ter­dis­ci­pli­nary, we must learn the best practices of team science in order to make collaborations work successfully.

The need to articulate the risk, benefits and need for basic science was made clear by AAAS Pre­si­dent and ex-Congressman Rush Holt in his President's forum speech on Monday. There have been calls not only from policy makers, but from microbiologists as well to look into the impact, ethics, and regulation of the use of microbes. While we may not always agree on the details, we must each participate in the ongoing dialogue about the progress that can be made in the responsible conduct of science. I call upon you to look outward to your colleagues, your community, and the ASM to explore the possibilities that the microbial sciences hold and to help push our field for­ward. Success in this endeavor is needed for us to truly understand how and why "Microbes Touch Everything".

Tim Donohue is a professor at The University of Wisconsin at Madison and the immediate past President of the American Society for Microbiology.