A Snippet: On the Origin of Truffle Aroma 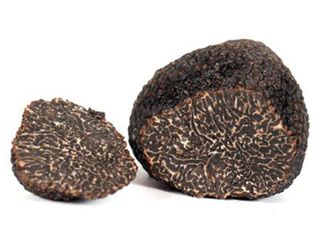 At times, people must think that microbiologists know everything. Case in point: haven’t you been asked whether truffles are fungi? Of course you know the answer: They are ascomycetes, perfectly good fungi in the same large systematic group as brewer’s yeast, molds, and morel mushrooms. Contrary to common belief, truffles are found almost everywhere. True, the most prized ones come from parts of France and Italy, but some perfectly delicious varieties are found in places like the Pacific Northwest of the US. Other not so tasty and generally insignificant looking varieties are pretty cosmopolitan. Lured by market price, as well as flavor, innovative entrepreneurs have established truffle plantations on at least four continents.

Next question: why do truffles go to the trouble of producing their strong aromas? They are subterranean fungi that live in mycorrhizal relationship with roots and living underground makes the spreading of their spores a special problem. The usual wind and water-borne spore-dispersal mechanisms used by mushrooms don’t apply. Truffles solve the problem by attracting animals, such as field mice, which eat them and pass the spores intact through their digestive tract. This attraction holds for the truffle-hunting pigs and dogs employed by truffle-hunting humans, as well. So, where does the characteristic aroma of truffles come from? By now, many people are familiar with it, thanks to the widespread use of the relatively cheap truffle oil (which, to my taste, is a not unreasonable approximation of the real thing). The story has a major microbiological dimension that we partly covered earlier in this blog. It turns out the truffles are thoroughly colonized by bacteria throughout their life cycle, some of which play a big role in aroma production. The number of bacteria living inside and outside truffles ranges from 1 million to 1 billion per gram of dry weight. There are plenty of yeasts as well. The aroma is attributed to 10 to 20 compounds for each truffle species, and the particular combinations contribute to the distinctive character of each species and the preferences of each chef. Found in many truffles are methylthiomethane, 3-methyl-1-butanol, and oct-1-en-3-ol.

The origin of the automatic compounds is not easy to fathom. In recent mini-review and meta-analysis, Vahdatzadeh, Deveau, and Splivallo cite work showing that only bacteria make one of the main odorants of a species called Tuber borchii. Based on determining the presence of the relevant biosynthetic pathways in the truffles and the bacteria, these authors suggest a rule: compounds frequently associated with truffle probably originate from both the truffle and its microbes, whereas those less commonly found appear to be derived solely from the microbes, most likely the bacteria. Go figure.

Given the complexity of the truffle microbiome and the variety of compounds involved in producing the aroma, there is ample room here for further studies. Aren’t you tempted? At the end of each experiment, you can take the leftover specimens to the kitchen!