« This Week in Microbiology #110: Exploring unseen life with unpronounceable words | Main | The Louse And The Vaccine »

A Whiff of Taxonomy (….and Pathogenesis): Akkermansia muciniphila 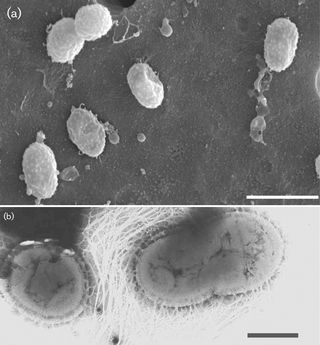 Figure 1. (click to enlarge) EM images of A. muciniphila. (a) SEM image. Bar: 1 μm. (b) TEM image of a negatively stained preparation. Note the thickened but extensive capsule fibers of the cells. Bar: 0·5 μm. Source

The depth and breadth of the intestinal microbiome seem to have no limit, so highlighting a single species is totally arbitrary. But choose one must, and I have opted for Akkermansia muciniphila as much as anything, for reasons of human interest.

A. muciniphila is a dominant human intestinal mucin-degrading bacterium in a genus proposed in 2004 by Muriel Derrien and colleagues. It’s a Gram-negative, oval-shaped, strictly anaerobic, non-motile non-spore-former. Odd that such an abundant organism had to wait so long to be discovered. Most likely this has to do with the conditions used to isolate it, namely an anaerobic medium containing gastric mucin as the sole carbon and nitrogen source. The genus Akkermansia belongs to the division Verrucomicrobia. The name honors Antoon Akkermans, a Dutch microbiologist, recognized for his contribution to microbial ecology.

This organism has received special attention recently (click here) because it is thought to be involved in inciting colorectal cancer. One of the players in these diseases is heme, a cytotoxic and major constituent of myoglobin in red meats, which are a known risk factor associated with colon cancer. In rats, a heme-rich diet leads to damage of the large intestinal epithelium, which induces it to proliferate and become cancerous. Heme is poorly absorbed by the intestinal epithelium. However, the presence of this compound leads to an increase in the number of many gram-negatives, including A. muciniphila. The bacteria contribute to greater epithelial permeability by producing hydrogen sulfide that loosens the mucin layer. This exposes the gut cells to the cytotoxic heme. Antibiotics reverse these effects (one of the few instances in recent times that antibiotics got good press).

This is not all. A. muciniphila has also been implicated in reducing obesity and Type-2 diabetes in rodents and people. Its presence correlates with lower body weight and a healthier metabolic state after calorie restriction. So, pending more studies, A. muciniphila as been proposed as a weight-reducing probiotic. But if you take it, stay away from red meat!

We recently discussed this topic on the podcast This Week in Microbiology #110.