Besides enjoying some serviceable crawfish étouffée, I listened to several exciting papers at last June’s General Meeting of the ASM in New Orleans. One that stuck in my mind was presented by Prof. Carla Pruzzo, given at a celebratory session in honor of Rita Colwell. A marine microbiologist at the University of Genoa, she and her colleagues have been concerned with no lesser a subject than the effects of climate change on the microbial ecology of the oceans. Pruzzo described results obtained from studying an amazing set of samples of marine plankton gathered over many years. The samples they studies were collected in the North Atlantic and North Sea since 1946 by having commercials ships troll a simple but effective sampling device behind them.

A word about this device and its uses. It was designed by folks at the Sir Alister Hardy Foundation for Oceanic Science as part of a long-standing program called CPR Survey (for Continuous Plankton Recording), aimed at studying the composition of marine plankton over a large scale of time and place. The sampler consists of a metal box about one meter long that can be towed by any ship, usually at about 7 meters below the surface. It is sturdy enough not to be affected even by winds of gale force. Seawater flows through the sampler for the time needed to travel 10 nautical miles, resulting in filtration of a about 3 m3 of water. Particles, mainly plankton, are retained on a 280 µm silk mesh that is then preserved in buffered formalin and stored in the laboratory to be analyzed at leisure. The Foundation ostensibly talked shipping companies into towing this gadget behind their ships (which may be story in itself). In the time since this project was started in 1931, a staggering number of samples - some 170,000 - have been gathered and archived in the survey’s headquarters in Plymouth, England. Incredible! (I seem to be one among the many who have never heard of it until now.) For an animation about this program, click here and for an issue of the journal Progress in Oceanography with many papers on this topic, click here. 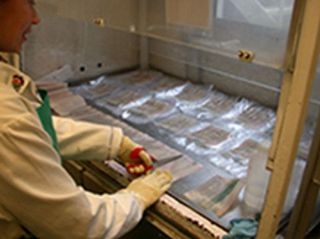 Single bacteria obviously pass through the filter of the sampler but members of the plankton, especially the larger ones, are retained due to a handy circumstance. Fortunate for the purpose of this study, marine vibrios frequently attach to members of the plankton, such as copepods, and are thus retained by the filter. The data collected with this sampler correlate quite well with those obtained using standard plankton nets, giving confidence that the measurements represent actual numbers of the plankton-bound bacteria present in the seawater.

The most notorious among the marine vibrios is of course V.cholerae, the agent of cholera, but others are important pathogens as well. These include V. parahaemolyticus, the agent of seafood poisoning worldwide, and V. vulnificus, the cause of serious wound infections and septicemia. Other vibrios affect shellfish of various sorts and are of economic importance. Added to this impressive list are also important pathogens of corals, where they cause the serious condition known as coral bleaching. In recent years, vibrio infections have affected an increased number of bathers in typically cold waters of Northern Europe.

Marine vibrios are the dominant bacteria in warm coastal and brackish waters, at least among those that can currently be cultured. They attach to surfaces, both inanimate and live, especially those with chitin. Ambient temperature, between 25° C and 30° C, promote this attachment (think climate warming). This is not trivial. A single copepod can carry as many as 104 Vibrio cholerae cells, enough to cause disease in a human. A number of colonization factors are involved in this process, including N-acetylglucosamine-binding protein A (GbpA) and a mannose-sensitive hemagglutinin. A qPCR assay for GbpA has proven to be so specific and sensitive that it can be used as an indicator of the presence of V. cholerae in natural samples. 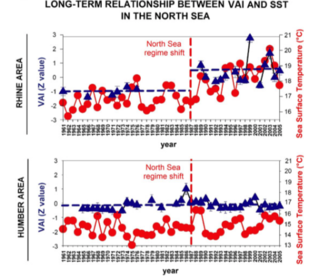 Using extensive PCR analyses, Luigi Vezzulli and colleagues went back and looked for vibrios in the collection of planktonic samples obtainedfrom 1960 to now. They analyzed 55 samples and developed an unbiased index (Vibrio-relative abundance index, or VAI) for the determining the abundance of vibrios in each sample. The authors focused on parts of the North Sea, the Rhine estuary, that in 1987 had undergone a rather abrupt rise in temperature (about 2 °C), known as the "North Sea regime shift." Here, a rise in number of vibrios paralleled the increase in surface water temperature. On the other hand, samples from the Humber river estuary in England, which had not undergone such a temperature transition, did not show much of a change in the vibrio populations. For a review of this work, see here. As the authors of a paper said: "Among environmental variables, increased sea surface temperature explained 45% of the variance in Vibrio data, supporting the view that ocean warming is favouring the spread of vibrios and may be the cause of the globally increasing trend in their associated diseases." So, global warming has a strong effect on the microbial community of the oceans, with potential large-scale consequences on human and animal health. 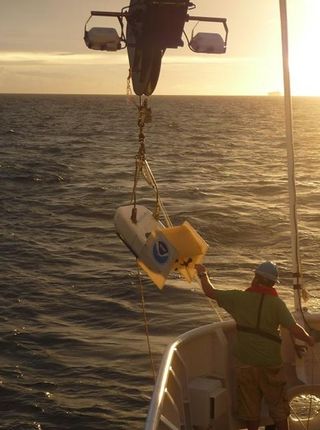 To further figure out the effect of global warming on the planet’s microbiome, it would be nice to have some more data, especially extending across other regions. This is where the study of the plankton samples uniquely comes in. The samples are a precious record of the vibrios found in seawater over periods when the sea surface became warmer. Note that the samples were restricted to two North Sea spots, the estuaries of the Rhine and the Humber rivers. Although these were large areas, about 1500 square miles each, sampling other places on the globe is clearly a good idea. In the US, the National Oceanic and Atmospheric Administration (NOAA) is conducting what they call "the world’s largest plankton tow" in the Pacific. Even if the sampling is not being done in vibrio-rich waters specifically, it would be good if the samples could be eventually analyzed for plankton-bound vibrios. We are lucky, for here is a combination of factors that conspires to make long-range studies possible: the relative ease of obtaining huge number of plankton samples and the ability of vibrios to stick to its members and thus be retrieved by filtration.  In context, global warming has been implicated in changes of a rather large number of infectious diseases, a phenomenon that could have momentous consequences for this world.