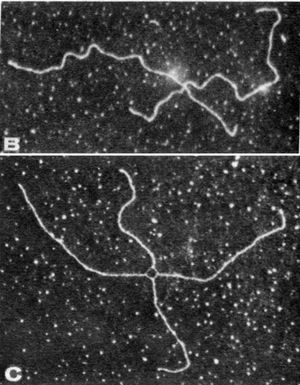 Both electron micrograph pictures to the right show two EcoR1-linearized plasmid DNA molecules in the midst of un­der­go­ing genetic recombination. Since David Dressler and I published it in 1977, the photo and our ac­com­pa­ny­ing diagram have been re-printed in many biochemistry and genetics textbooks as the physical proof of the hy­po­the­ti­cal recombination in­ter­me­di­ate that Robin Holliday pro­po­sed in 1964 to explain genetic recombination in fungi [1]. The micrograph strongly contributed to the ge­ne­ral acceptance of the Holliday Model and its in­ter­me­di­ate, commonly referred to as Holliday Junction, as ex­plai­n­ing the pro­cess of recombination in all or­ga­nisms.

As shown in the diagram (Fig. 2), in this model, the first step of recombination occurs when one single strand of one DNA double helix is nicked and ex­ten­ded by DNA po­ly­merase to form an extruded single strand. This single strand can then invade the homologous double helix to form a D-loop (A – C). After further nicking, extrusion, DNA di­ges­tion, and re-ligation (D – E), the Holliday re­com­bi­na­t­ion in­ter­me­di­ate (F) is formed. Here two ex­chan­ged single strands are shared between the two parental DNA molecules in an in­ter­me­di­ate structure with apparent two-fold rotational symmetry.

The great strength and acceptance of the Holiday recombination in­ter­me­di­ate is based on its abi­li­ty to explain a number of curious features in the genetic recombination data that had been glea­ned from the study of certain fungi, such as Neurospora crassa. The first such feature was the pre­sence of areas of heteroduplex DNA, shown in the diagram as regions where a white strand is paired to a complementary black strand. Such heteroduplex DNA must have been generated du­ring recombination because it could be detected genetically, i.e.,when phenotypically dis­tin­guish­able alleles occupied the heteroduplex DNA region and, after the first round of mitotic DNA rep­li­ca­tion after recombination, emerged in a different frequency than they had entered. For example, the two daughter double helices in ‘H’ contain a region in which there are three white strands and only two black ones, and the adjacent area contains the original number of two black and two white strands but in a different order. Neurospora has the unusual feature that it retains all products of recombination and the first mitotic cell division in the order of their production in a linear pod. If the parental cells contain alleles that happen to be adjacent to a recombination site, odd outcomes can be detected, for example, using the colored DNA strands in the diagram as though they were markers, Bl, Bl, Wh, Wh, Wh, Wh, Wh, Wh, Wh or Bl, Bl, Wh, Wh, Bl, Bl, Wh, Wh instead of the usual non-recombinant Bl, Bl, Bl, Bl, Wh, Wh,Wh, Wh. Such unusual daughter ge­no­types would arise when the DNA molecules in ‘H’ undergo their first mitotic division. 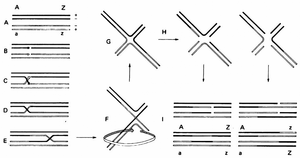 (Click to enlarge) Figure 2. Linear DNA mo­le­cu­les undergoing genetic recombination via a Hol­li­day intermediate. The model is explained in the text. Source

The symmetry of the in­ter­me­di­ate that is so apparent in the electron micrograph and in the rotated 'open' in­ter­me­di­ate (G) in the diagram shown in Fig. 2 is the second essential feature that makes the recombination in­ter­me­di­ate such a powerful centerpiece of Holliday’s proposed mechanism for genetic recombination. That is, Holliday's proposed recombination in­ter­me­di­ate could be broken apart, or matured by cleavage of the two recombining DNA double helixes via two symmetrical alternatives: the cleavage could be from left to right in the diagram to yield the left products in 'H' or from top to bottom to yield the right daughter product in 'H'. In one case the external allelic markers (originally A and B on one input DNA molecule and a, b in the other) retain their parental configuration (H left). In the alternative maturation step, the markers are re­com­bi­ned (H right). Thus, after a recombination event, genetically revealed by the formation of he­te­ro­dup­lex DNA, there is an equal chance that the flanking parental alleles will be either recombined or left in their original parental linkage. This too was known from the study of Neurospora. Thus the formation and maturation of the Holliday in­ter­me­di­ate succeeded in satisfying and explaining all of the genetic observations.

The simplicity of the Holliday recombination in­ter­me­di­ate and the model that utilizes it was at­trac­tive but it was not the only recombination model discussed in the 1960s and early 70s, and there was no genetic way to prove which model was correct. That proof required the use of different techniques and led to our discovery of structures such as the one shown in the electron micro­graph, in which DNA molecules were captured in the pro­cess of genetic recombination, using the Holliday in­ter­me­di­ate.

The origin of the molecule pictured above, which proved the existence and universality of the Holliday recombination in­ter­me­di­ate, and by inference, the validity of the Holliday model, is an interesting story of good planning, much hard work, and some luck, as is true of most scientific discoveries. The story begins in 1973 in the laboratory of David Dressler in the Biochemistry and Molecular Biology Department of Harvard University. As a new graduate student, I needed to pick a dissertation topic and we were having a discussion about what that might be. I had already wor­ked to some extent on DNA replication, which was David Dressler's forte, for he had discovered the greater-than-one-genome-length single stranded DNA tail that led to the 'rolling circle' model for DNA replication used in a number of phages, such as ΦX174 — see STC's recent post —  and in Xenopus laevis ribosomal DNA amplification, and then found that replication of the linear phage T7 DNA proceeded via two growing forks moving in opposite directions from a single origin. This area was fruitful and important, but I was more interested in the pro­cess of DNA recombination, about which almost nothing was known mechanistically. I had read numerous articles especially in the phage lambda literature about genetic recombination, thinking that it might be possible to deduce the mechanism from the genetic data. but was frustrated. In our discussion, David sug­ges­ted that identifying a recombination in­ter­me­di­ate might be ex­tre­me­ly valuable, as it would give an indication of the mechanism by which the in­ter­me­di­ate was formed and then matured, as rep­li­ca­t­ion in­ter­me­di­ates had provided similar insights into the pro­cess of DNA replication. At that time, neither of us knew about Robin Holliday and his theoretical in­ter­me­di­ate and model for genetic recombination. David specifically suggested that we use what was then the ex­tre­me­ly novel pro­cess of recombinant DNA manipulation to introduce a single res­triction site into the genome of the ΦX174 virus so as to be able to cleave double-stranded circles that were undergoing re­com­bi­na­t­ion and see if we could catch them in the in­ter­me­di­ate stage of the pro­cess.

That seemed to me to be a good idea but I then suggested a modification, which was to utilize instead a small plasmid that already had a single restriction site in its genome. With this simple approach, I then began to isolate plasmid DNA from bacteria and examine the individual circular molecules in the electron microscope. Naturally, when the DNA was combined with formamide and cytochrome C and spread in a protein monolayer on an aqueous surface before being picked up on the electron microscope grid, the individual DNA circles were very often overlapping each other, and such overlaps were of course indistinguishable from what we might expect a figure 8 recombination in­ter­me­di­ate to look like. Therefore the DNA preparation of plasmids had to be sufficiently diluted before spreading so that overlaps would be extremely rare. Needless to say, this increased greatly the amount of time I had to spend on the electron microscope.

As originally planned, I also cleaved the plasmid DNA preparation with the restriction enzyme EcoR1 before spreading for the electron microscope. As there was one EcoR1 site per genome, this converted the double-stranded DNA circles to linear DNA molecules. If any were in the pro­cess of DNA recombination with each other, the proposed figure 8 in­ter­me­di­ate molecule would be converted to an X, which we termed a Chi (χ) form. Again keeping the DNA concentration ex­tre­me­ly low reduced greatly the chances that two linear double-stranded molecules would overlap each other at random and generate an X shape. I easily found such χ-forms at a low, but re­pro­du­cible frequency in linearized plasmid DNA preparations. But were they real recombination in­ter­me­di­ates?

A necessary feature of a genetic recombination in­ter­me­di­ate is that the two DNA molecules must be interacting at a point of DNA homology. We could test this requirement in our χ-forms by mea­su­ring carefully the lengths of the DNA arms coming out from the apparent crossover. If the arms were of random length, then the X would represent the random overlap of two linear mo­le­cu­les. However, if the arms were composed of two pairs of equal length, then the crossover site was at a region of homology because it occurred at the same distance in each molecule from a known ge­ne­tic mar­ker (the EcoR1 cleavage site). Each molecule could have a different combination of arm lengths, but it should always be symmetric — and they were!

The fact that we found any recombining χ-forms at all was due to our luck to have available the right reagent: a very concentrated preparation of the EcoR1 restriction enzyme. At that time, only a few, low-activity, restriction enzymes were available commercially and most labs had to make their own. I and a post-doc in the next lab made EcoR1 for everyone, and our prep, by some luck, turned out to be ex­tre­me­ly concentrated and powerful: a DNA digestion that might take se­ve­ral hours or overnight with other preparations could be accomplished in 30 seconds!  This high activity turned out to be essential for our recombination experiment because once the DNA mo­le­cu­les were linearized, the crossover point could easily 'branch migrate' to the end of the mo­le­cu­les by con­ti­nued strand exchange with essentially no energy barrier, and release two linear mo­le­cu­les. Only by digesting for a mere 30 seconds and immediately placing the DNA on ice, could we trap the χ-forms before they disappeared!

Finally, to complete the proof that we had found the elusive Holliday recombination in­ter­me­di­ate, we had to show that the fine structure of the crossover point of the χ-forms we observed was in­deed as predicted by Holliday (see ‘G’ in the diagram), and that they were formed during re­com­bi­nation. The first problem was solved by partially denaturing the molecules in a slightly elevated formamide concentration during spreading for the electron microscope so that the single stands in the crossover could be distinguished as in the micrograph shown in Fig. 1. To complete the second half of the proof, we showed that such χ-forms were only present in recombination proficient E.coli but were absent from plasmid preparations from recombination deficient (recA−) E. coli. 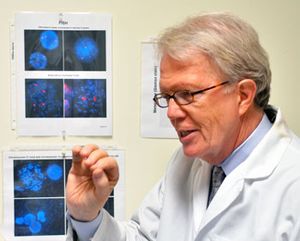