"Evolution? Who needs it?" 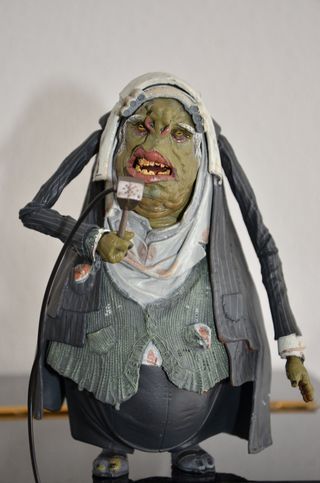 "Evolution? Who needs it?" – the very successful Vogon philosophy as reported by Douglas Adams in The Hitchhiker's Guide to the Galaxy. When the first Vogons crawled out of the Vogsphere seas billions of years ago, nature considered them a huge ugly mistake and turned away in disgust. What nature rejected, the Vogons corrected with surgery to become one of the most successful races in the galaxy, which as the late Douglas Adams reminded us (again and again) is very, very huge.

In contrast, Earth is a very small place and the ancient version was a rich mix of evolving cosmochemicals aspiring to become alive. Importantly, nature was there to help. Some years on, about 1.5 billion of them, life emerged and a few billion years later a variety of new life forms were colonizing every nook and cranny of young Earth. Archaea, as ancient as the bacteria they were originally thought to be, were eventually discovered thriving in extreme environments. Suspecting a difference, Carl Woese (who died in 2012) and his disciples at the University of Illinois invented ribosomal RNA (rRNA) typing, proved that archaea were not bacterial, and gave them a domain of their own in his Tree of Life (TOL). Woese's three-domain tree separates the eukaryotic and archaeal lines prior to archaeal radiation. Thus, all three domains – Bacteria, Archaea and Eucarya – are similarly primordial.

Archaea, in fact, appear more biochemically akin to eukaryotes – cells with enclosed nuclei and internal power-generating organelles that make up all fungi, plants and animals on Earth today – than they do to bacteria. However, "although they share many biochemical signatures not found in bacteria, archaea and eukaryotes differ from one another in a number of other critical properties," says the University of Colorado at Boulder's Norm Pace. "One of the most telling differences is in membrane lipid chemistry: eukaryotes use bacterial-like ester-linked and archaea ether-linked lipids, he explains. The late Nobel Prize winner Christian deDuve considered Woese's rRNA-based phylogeny correct, noting in his 2005 book Singularities that it wasn’t "just a case of beginner’s luck, but the outcome of a perceptive choice. Ribosomal RNAs go back to the very beginnings of life, they are highly conserved and, as parts of a complex interlocked machinery of fundamental importance, they are likely to have been transferred exclusively by direct, vertical inheritance." 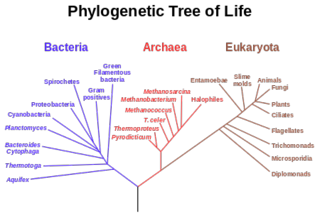 However, Woese's well-accepted three-domain tree has not gone unchallenged. The major contender is a two-domain tree, which combines eukaryotes with archaea from whom some scientists think they have evolved. Initial evidence of a genetically-advanced archaeaon in the form of one whole genome and two fragments suggests that may be the closest living relative of eukaryotes so far identified. As such it strongly favors the two-domain evolutionary tree where eukaryotes are melded together with a diverse group of complex archaea in the 'TACK' superphylum (Thaumarchaeota, Aigarchaeota, Crenarchaeota and Korarchaeota). This latest discovery has "very important consequences because it shows that an organism with characteristics of a modern archaeon could be the starting point for eukaryogenesis," Simonetta Gribaldo and collaborators at Instiut Pasteur in Paris wrote in the May 2015 issue of PNAS. Their own work supports the two-domain tree. 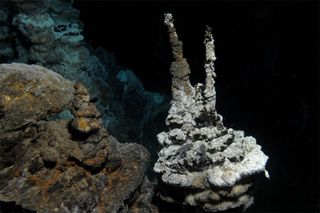 Figure 3. Loki's Castle, the field of deep sea vents bet­ween Norway and Greenland, is home to sedi­ments containing DNA from the newly dis­cov­er­ed archaea. Credit R.B. Pe­der­sen/Centre for Geo­bio­logy, Bergen, Norway. The vent field was given the name Loki's Castle as its shape re­min­ded its discoverers of a fantasy castle. The re­fer­en­ce is to the ancient Norse god of fire and trickery, Loki. Source

Thijs Ettema at Uppsala University in Sweden, who led the team that discovered what he describes as a quintessential archaeon (featured in STC here by student authors, including answers of Ettema to the students' questions) with a "whole bunch of eukaryotic genes" named it "Lokiarchaeum," after "Loki's castle" the deep-sea volcanic vents between Greenland and Norway where evidence of its existence was found. "In Norse mythology the shape-shifting deity 'Loki' is described as complex and confusing; thus it is a very fitting name for our typical archaeon that encodes a variety of important eukaryotic proteins including actin that enables present-day amoebas to stalk and engulf their prey."

Although Ettema says he "would never dare to claim that Loki is phagocytic," he does speculate that this might be the way an ancient Lokiarchaeota managed to capture that one special alphaproteobacterium which evolved into a mitochondrion. What the Ettema group does argue is that the genes usually associated with Lokiarchaeota, including those enabling membrane remodeling and intracellular trafficking, indicate that the onset of "cellular complexity was already underway before the acquisition of a mitochondrial endosymbiont (click here)." A global search is now on for living Lokiarchaeota and related organisms.

"Getting Loki in culture would go a long way to proving it ancestor to eukaryotes. For example, some readers will wonder if any of those eukaryotic genes could have been acquired through horizontal gene transfer later in evolution," cautions Elio (aka Moselio Schaechter, Professor emeritus, Tufts University). "We need to know more before Loki can help prove the two-domain tree. It’s still very early in the game." In response Ettema says "we have data that show eukaryotic-specific proteins (ESPs) are genuinely encoded as part of the Loki genome and not contamination. Moreover, the fact that the ESPs present in Loki form the deepest branches in phylogenetic analyses would argue that these are not simply horizontal gene transfers from eukaryotes but rather ancestrally present in Loki lineages." He adds mysteriously that more proof is on its way.

"Seems a lot of time and trouble to evolve when changes can so easily be achieved with surgery," comments Prostetnic Vogon Jeltz. "Just think how many worlds could be destroyed in even a half a billion years."

Jeffrey Morris at the University of Alabama in Birmingham explains that knowing how bacteria, archaea and eukaryotes are related will help "root" the TOL and tell us what the last universal common ancestor (LUCA) of all living things was. In other words, "it could give us a long-distance glimpse backwards into the world’s earliest days." He quickly adds, in deference to Prostetnic Vogon Jeltz, who Morris admits is very scary, that would be "shortly after [the computer called] Earth left the construction docks at Magrathea."

To hear a conversation with Thijs Ettema regarding "Loki," please listen to our podcast, Microbe Magazine Podcast, Episode 4.