Phage Responses to the SOS Response 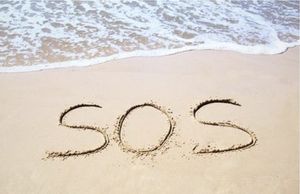 No matter where a bacterium lives, its DNA is sometimes damaged by UV radiation, toxins, reactive oxygen species (ROSs), or other nasty things. Faced with such assaults, as well as problems inherent in DNA replication, bacteria evolved sophisticated mechanisms to detect and repair DNA damage. One widely conserved system, the SOS re­sponse, was first described in 1974 in E. coli (cited here). When this bacterium recognizes that it has a problem, it halts cell division and activates a network of genes to re­pair the damage (here's a paper with a useful summary, as well as more details on one player, LexA). 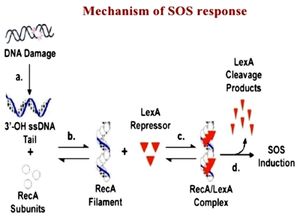 A key agent in recovery is a recombinase, RecA. It repairs DNA by swapping homologous regions between flawed strands to generate one complete, undamaged chro­mo­so­me. Homologues of RecA have been found in all cells in all three domains examined so far — it's Rad51 in us humans — as it is essential for reactivating stalled re­pli­ca­tion forks as well as for men­ding damage. When re­gions of single-stranded DNA (ssDNA) result from UV ex­posure, for example, they must be protected from attack by cellular nucleases. Such regions are quickly coated by many copies of SSB protein (Single-Strand DNA-Binding protein) that are subsequently displaced by RecA. Each RecA monomer protects only three nucleotides, but RecA monomers polymerize into long filaments that wrap around the DNA. 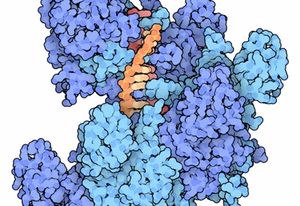 Figure 3. RecA in Action. Researchers have sol­ved the structure of RecA and captured dif­fe­rent steps in the process of homologous re­com­bi­na­tion. The RecA/Rad51 protein performs the tricky task of pairing up a broken strand with its backup copy. The structure shown here, from PDB entry 3CMX, shows E. coli RecA sur­roun­ding the heteroduplex, after the damaged strand has been paired with the intact copy. The structure was determined using an en­gi­neered form of recA that when expressed yield­ed proteins composed of five tandem copies of RecA. The structure revealed that the DNA is stretched when it binds to recA, with a dis­tinc­tive pattern of three bases to each protein sub­unit (Click to see the full filament). Source

The filament form of RecA — also known as activated RecA or RecA* — is the active agent driving RecA's second contribution to the SOS response: increased expression of the more than 43 genes scattered across the genome that comprise the SOS regulon. The intermediary be­tween the RecA filaments and the regulated genes is another key cellular protein, the repressor LexA.

During normal growth, LexA represses expression of all the genes of the SOS regulon. Structurally, LexA contains two domains joined by a hinge region. Stable LexA di­mers bind to DNA at specific, highly conserved sites (SOS boxes) and prevent expression of the downstream genes. Expression of the genes in the SOS regulon requires de­struction of LexA. The structure of activated RecA allows LexA dimers to embed deeply into the filament groove. This embedding alters LexA's conformation and stim­u­lates its auto-catalytic cleavage, thereby ending its re­pressor activity. When the DNA has been repaired, the LexA level returns to normal and repression of the SOS regulon is restored.

An Invitation to a Phage

The host's SOS response invites exploitation by temperate phages, and phages do not often turn down such invitations. In a lysogen, the SOS response provides a signal that notifies an astute pro­phage that the cell is in trouble and may have suffered irreparable DNA damage. It might be pru­dent for the prophage to go lytic at this point, asap!, and get a crop of progeny assembled while the host can still support phage replication. How a prophage decides to jump ship has been best studied for phage λ, a temperate phage infecting E. coli. For a λ prophage to maintain ly­so­ge­ny it must silence many of its genes, specifically those involved in replication, synthesis of struc­tu­ral proteins, and host lysis. At the same time, it actively expresses a few genes, including its re­pres­sor CI whose job it is to silence those genes. This repressor is similar to LexA in structure and function. Likewise, CI is prompted by RecA filaments to self-cleave, thereby flipping the switch from lysogeny to lytic replication. 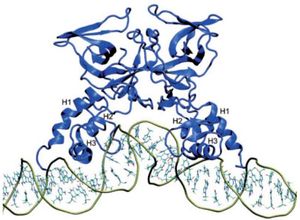 Figure 4. Proposed model of the E. coli LexA repressor bound as a dimer at the cka gene regulatory region. The three α-helices of the N-terminal domain are marked as H1 to H3, respectively. Source

As often is the case, the λ way of ending lysogeny be­came the paradigm, but λ's way is not the only way. More proof for that comes from phage GIL01, a temperate phage that infects the Gram-positive insect pathogen Bacillus thuringiensis. Since GIL01 carries terminal pro­teins covalently linked to both ends of its chromosome, its prophage can't integrate into the host chromosome. Instead, during lysogeny GIL01 maintains stably as an independent linear prophage. Nevertheless, like phage λ, GIL01 replication is induced when UV or mitomycin C (MMC) treatment elicits the SOS response in the lysogen. As with phage λ, induction requires RecA. But when re­searchers looked for a phage-encoded repressor com­parable to λ's CI, they found no good candidates.

To pursue this farther, they isolated clear plaque (cp) mutants, i.e., mutants that could not es­tab­lish lysogeny but could replicate only lytically. These mutants mapped to three locations in the ge­nome. Of particular interest was the region named dinBox1 (damage-inducible Box1) upstream of genes for replication and regulation. That region was similar to the 14 bp consensus sequence for LexA binding sites (SOS boxes) in B. subtilis. Point mutations in that region abolished lysogeny. Did GIL01 perhaps use the host's LexA as its repressor? The researchers wanted to test this by ge­ne­ra­ting a host strain lacking LexA, but LexA is essential for B. thuringiensis' survival. Instead they ge­ne­ra­ted a host strain with a non-cleavable LexA. As you would expect, these cells were hy­per­sen­si­tive to DNA damage from MMC since cleavage of the LexA proteins is necessary to mount an SOS response and boost DNA repair. Cleavage of LexA was also found to be necessary to induce the GIL01 prophage. 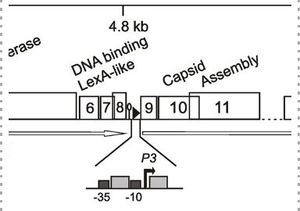 Figure 5. Partial physical map (Detail ) of phage GIL01. Predicted ORFs are de­picted as open box­es. All transcription is rightward. Probable gene functions are indicated above certain ORFs. Promoters are shown as filled arrow­heads, and each promoter region is enlarged below the map. Boxes for –35 and –10 are de­pic­ted as black rectangles, and angled arrows represent transcription start sites. Gray boxes show the locations of conserved LexA-binding sites in relation to the three promoters (Click to see full partial map ). Source

Based on these and many other experiments, the re­sear­chers concluded that LexA directly represses the lytic path­way for this phage by binding to dinBox1, an SOS box in the prophage genome. Treatment of the lysogens with MMC triggered LexA cleavage as part of the host's SOS re­sponse, and LexA cleavage induced the GIL01 pro­phage to replicate and ultimately lyse the cell. Using the host's LexA instead of making its own LexA-like repressor reduces the number of genes the phage requires by one. This might matter to GIL01. Phage λ has 74 genes to spend, compared to 30 for GIL01. Moreover, a λ pro­phage relies on the host for its replication and passage to both daughter cells, while GIL01 has the added burden of needing several genes to replicate its 'plasmid-like' linear prophage and partition the copies during cell division.

But this is not the whole story for GIL01, as two other clues later revealed. First, LexA also binds to a re­gion adjacent to dinBox1, a region dubbed dinBox1b. Mutation of conserved nucleotides in either re­gion reduces LexA binding; mutations in both sites nearly eliminate binding altogether. Second, some GIL01 cp mutants mapped to ORF7 indicating that the encoded protein, Gp7 (gene product 7) is required for lysogeny. These two observations turned out to be intimately related. By forming a stable complex with LexA, Gp7 inhibits its self-cleavage. LexA now binds more stably to SOS box­es in the prophage chromosome, thereby inhibiting prophage induction. It also binds more firmly to host SOS boxes, and thus impedes the host's SOS response. At first glance this is surely puzz­ling. Why would a phage want to compromise its host's DNA repair mechanism and at the same time hinder its own escape from the damaged ship?

I emailed that question to the researcher, Nadine Fornelos. In her response she described a per­ti­nent recent experiment: "I have overexpressed gp7 in the phage's natural host, Bacillus thu­rin­gien­sis GBJ002 [without GIL01], and subjected the cells to MMC treatment. With this simple ex­pe­ri­ment, I intended to demonstrate that cells in which gp7 was expressed were more vulnerable to genotoxic treatment. Surprisingly, this was not the case." Instead she found that expression of gp7 increased cell survival 8 – 10-fold.

She then went looking for clues in the cellular genome and found a chromosomal prophage (CP). Moreover, this CP encoded a LexA-like repressor, the tactic we saw earlier used by phage λ. In her earlier experiments she had induced GIL01 replication with 0.05 μg·ml–1, a concentration with mi­ni­mal effect on host survival. In the recent gp7 expression studies she used a higher MMC con­cen­tra­tion (0.1 μg·ml–1) that reduced host survival 100 – 1000-fold. She tentatively concluded that at the lower MMC concentration, GIL01 replicated without interference from the repressed CP. At the higher MMC concentration, the CP was induced, replicated, and lysed the cells. Expression of Gp7 likely inhibited CP induction at the high MMC concentration, thus explaining her observation of in­creased cell survival.

Gp7 is the first phage factor known to interact directly with LexA to modulate both prophage in­duc­tion and the host's SOS re­sponse. This story portrays prophage induction during the SOS response as a highly-evolved regulatory dance sensitive to differences in stress level and re­pres­sor binding affinities to various SOS boxes. Outside the lab, it is not a one phage–one bacterium world. Competition for bacterial hosts is fierce, and a phage must defend against stowaways.