by Susan S. Golden, with help from students of The University of California – San Diego BioClock Studio

Transcriptomic and metagenomic methods make it possible to take a snapshot of the processes occurring in a mixed microbial population; sampling over a time course can transform that image into a motion picture. That’s the goal: a molecular video of what is being done, by whom, and when, out in the environment. But there is a catch: for continuity of the frames in your movie, you need to sample the same population at each time point. When your target population is drifting effortlessly in the marine environment, and your bucket is tethered to a sluggish ship, the ocean current presents you with a new population each time you capture some water. Ed DeLong, with postdocs Liz Ottesen and Frank Aylward, and colleagues from the Monterey Bay Aquarium Research Institute, solved this problem by using a free-drifting robotic Environmental Sample Processor (ESP) (1). The ESP, suspended 23 m below a drifting float on the surface in the North Pacific Subtropical Gyre, could "go with the flow," and collect and preserve samples of microbes ranging from 0.22 – 5 µm in size at specified time points. Physical measurements from the environment were recorded in real time, and RNA from the recovered samples was analyzed by reverse transcription and sequencing, and mapped back to the genomes of ocean denizen. This experimental set-up and some early results have been previously introduced in this blog by Heather Maugham.

The authors expected, based on published lab and environmental work, to see diel cycles of transcripts for various biological processes for RNA attributable to algae and cyanobacteria; members of these groups are known to have circadian clocks, or at least hourglasses, that enable them to execute daily programs of gene expression. The big surprise came when the transcripts from other bacterial groups were examined and shown to also exhibit extensive daily cycling of transcript abundance. Now that’s news!

Dominant among bacteria in the open ocean is the cyanobacterium Prochlorococcus, which has been dubbed the most abundant organism on earth. As is true in lab cultures, the Prochlorococcus in the North Pacific Subtropical Gyre exhibited time-of-day-dependent transcript abundance, with almost half of the transcripts from Prochlorococcus genes accumulating periodically. Whereas lab cultures show strong preference of dawn or dusk for transcript peaks, transcripts from many genes in the field samples peaked at midday. Interestingly, this group was highly enriched in genes that have no KEGG orthology annotation, whereas the dawn- and dusk-peaking genes could largely be categorized with respect to function.

Other organisms in the population include proteorhodopsin-containing photoheterotrophs such as Pelagibacter which use solar power to drive proton-pumping rhodopsins, bacteriochlorophyll-containing heterotrophs like Roseobacter, and many heterotrophs that are not directly light responsive; all of these groups require organic carbon for their molecule skeletons and reducing power, a clear distinction from the genuinely autotrophic cyanobacteria. None of these groups is known to have a clock, and yet their transcripts also showed periodic abundance. 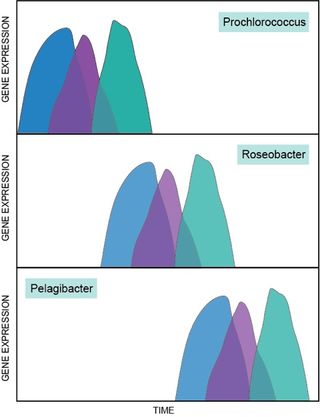 Figure 2. Expression of genes across the day-night cycle. The Prochlorococcus gene expression precedes that from Roseobacter and Pelagibacter. By Jenny Lee.

The resulting "motion picture" showed a multispecies wavelike progression of suites of genes peaking in expression across the day-night cycle. Notably, the cyanobacterial wave preceded the peaks in the respective gene suites from other groups. In all species translational, then transcriptional, then transporter genes peaked in successive waves, but with an off-set such that Prochlorococcus led the parade, followed by groups dominated by Roseobacter and Pelagibacter (Figure 2). How do the non-cyanobacterial species execute daily cycles of gene expression? Perhaps they have circadian clocks that have not been identified, or use light-sensitive pigments to initiate a program that plays out during the day, like sand through an hourglass, until the next day’s light resets the timer. The authors pose an alternative hypothesis: perhaps the metabolic processes of the autotrophs are tightly coupled to those of the consumers, such that the heterotrophs take their timing cues from neighbors who are wearing a watch.

Support for this last hypothesis was bolstered by additional sampling along the California coast, where the tiny eukaryotic alga Ostreococcus, rather than the pelagic Prochlorococcus, dominates primary productivity (2). As in the open ocean, the autotroph showed a daily burst of transcripts related to photosynthesis, which was followed by waves of transcripts from the heterotrophs related to translation and oxidative phosphorylation, trailing those processes in the photosynthetic pacesetter. From extensive analyses of these datasets from distant ocean transects, the authors conclude that the microbial activity in the ocean is coordinated on a daily cycle and tightly coupled between producers who watch the clock, and consumers that follow their leads. 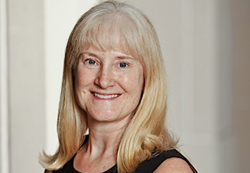 Prof. Golden holds a Howard Hughes professorship at the University of California at San Diego

Posted on September 07, 2015 at 05:00 AM in Ecology, Methodology, Physiology & Genetics, Teachers Corner | Permalink