« Kiss and Make Up: Myxococcus xanthus demonstrates bacterial cooperation | Main | Life in a Sea of Gradients »

A Tale of Two Freds 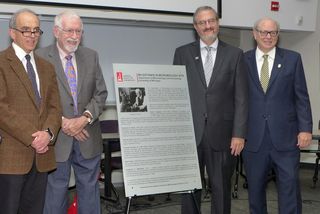 Recently, I participated in a ceremony at the University of Michigan in Ann Arbor honoring their Department of Microbiology for its contributions to our science. The ASM tangibly recognizes "Milestone Sites" by providing a plaque that briefly chronicles the achievements of the place. Michigan's was perhaps the first microbiology department in the United States. It was founded in 1904 by Frederick Novy and was preceded in 1890 by the first required bacteriology course in any U.S. medical school. It has had an uninterrupted history of first-rate research and educational achievements. Many of the graduates of this department have gone on to make outstanding contributions of their own. So, this honor is highly deserved.

The ceremony began with a most exciting account of the life and professional achievements of Novy, presented by Dr. Powel Kazanjian, the chief of the infectious disease service at the medical school. Besides his M.D., Dr. Kazanjian holds the distinction of having gotten a Ph.D. in history, having written his thesis on Novy. He described the life of this pioneer in American microbiology and how he helped develop the budding field of what was then called bacteriology. Novy obtained a Sc.D. degree in 1890. He then got an M.D. degree and became an assistant professor of hygiene and physiological chemistry. He visited several labs in Europe including those of Pasteur and Koch. After his return, he soon became one of the foremost bacteriologists in the U.S. Perhaps reflecting the tenor of the times, his interests ranged quite far, including the study of spirochetes, anaerobic bacteria (before being called Clostridium perfringens, this species' name was C. novyi), protists (trypanosomes), and viruses. 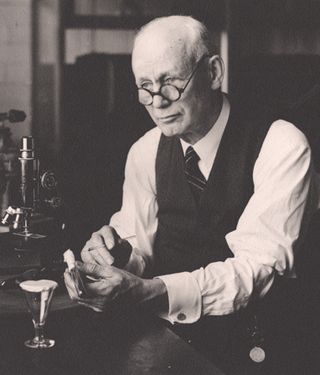 Dr. Kazanjian's talk emphasized Novy's interest in the wider attributes of microbes. Based on a solid background in chemistry, Novy embraced the emerging field of bacterial physiology. Thus, he developed techniques for cultivating anaerobes and for studying bacterial toxins. His was one of the earliest apparatus for measuring bacterial respiration. I came away with the distinct impression that Novy would have been a true soul mate of current day microbiologists, probably more so than many of his famous contemporaries. It gets better. To quote from Dr. Kazanjian's thesis: "The meanings of Novy's science in American society can be viewed through the novel Arrowsmith, a representation of Novy's activities as told by his student, Paul de Kruif. Sinclair Lewis, who collaborated with de Kruif to write Arrowsmith, offered laboratory science as having potential to provide a resonant truth and substance to an early 20th century American society portrayed as bereft of meaning."

The history of the Michigan department parallels that of ASM, which was founded in 1899. Novy became its fifth president and was followed in that position by three other members of the department, Thomas Rivers, Walter Nungester, and Fred Neidhardt. The Society met twice in Ann Arbor and had its headquarters there for several years. The list of eminent Michigan microbiologists is too long for now, but I need to mention my friend and long-time colleague, Fred Neidhardt. I single him out because in addition to his powerful scientific discoveries, his chairmanship of the department is celebrated for his introduction of participatory management, an operating mode then unique in medical schools. The current chair, Harry Mobley, has successfully continued it.

A few more words about the occasion. The unveiling of the plaque was followed by a live podcast of This Week in Microbiology in which several members of the department participated. Afterwards, we had the pleasure of attending the symposium honoring Rolf Freter and Fred Neidhardt, presented by Manuela Raffatellu of the University of California at Irvine and Sam Miller from the University of Washington at Seattle.

ASM's program, Milestones in Microbiology aims "to promote greater awareness and appreciation of microbiology" as well as "to foster interest in the nation's microbiological heritage and to remind citizens, educators and "visitors" of the importance of microbiology. "The Michigan award is the 12th in the program's history. The program is run by the Center for the History of Microbiology/ASM Archives (CHOMA) Committee (full disclosure: I’m a member of this committee).