Body Size Allometry and the Politics of Prokaryotes 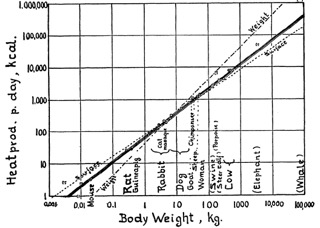 Figure 1. One of the oldest and most famous allometric relationships: the relationship between metabolic rate and body mass originally published by Max Kleiber in 1947 Source

When watching a hummingbird in flight, haven't you felt curious about how energy use relates to body size? Or thinking of a baleen whale sifting through krill, did you ponder the relationship between the size of an animal species and its local abundance? Maybe you’ve heard the near supersonic heartbeat of a developing fetus, which I got to hear when I was carrying my child, and wondered about the number of heartbeats in a lifetime. If so, you’re not alone. But don’t wear yourself out wondering, most of these things have already been measured thanks to allometry, the study of how organismal attributes scale in relation to each another. These types of relationships are often expressed as a power law (i.e. one measured quantity varies as a power of another). For example, animal size and local abundance vary predictably (and inversely) with each other, a scaling relationship known as Damuth's law. No need to huddle over the hummingbird question either. In most animals, metabolic rate scales as M0.75 (read: body mass to the ¾ power) (Kleiber, 1932 and 1947; Brown, 2005).  More recently, the allometric approach was applied to the relationship between animal size and prokaryotic abundance. The data set included a total of 32 species of organisms spanning 12 orders of magnitude in animal mass (Kieft and Simmons, 2015). Roughly speaking, the number of microbes associated with an individual terrestrial or aquatic animal scales isometrically with body mass wet weight in grams (M1.07). This means that if body mass increases by a factor of two, so does microbial abundance, more or less.

In most animals, the bulk of microbial symbionts live in the gut and fermentative organs where they can digest complex organic substrates, compete against pathogens, and even serve as prey. At 107−1012 microbes per gram of digesta, gut bacteria make up the bulk of microbial symbionts in most animals. For over half of the animals in this study (including the largest animals), it was assumed that microbial counts per individual roughly equate to the microbial abundance just in the gut organs. For 3 species, microbial counts from other organs/tissues were used: spongocoel in sponges, trophosome in deep sea hydrothermal vent worms, and epidermal and endodermal epithelia in Hydra. For the remaining species which included many insects, the microbial abundance published was based on microscopic counts per whole animal.

Generating a consistent data set spanning many orders of magnitude in body mass is the more tedious side of allometry. The fun is trying to interpret the scaling relationship between the two measured quantities; the value of the exponent often provides clues to the underlying mechanisms controlling the scaling. Based on this data set, it's no big surprise that the scaling of microbial abundance with body size was found to be consistent with the previously published scaling relationship for total gut volume to animal body mass (M1.0−1.08). This suggests that the number of microbes living in association with an animal is limited by the total gut volume. It also raises questions of whether including the microbial flora living on the skin and mouth would significantly affect the value of the scaling exponent and whether or not similar scaling relationships exist at different body sites. 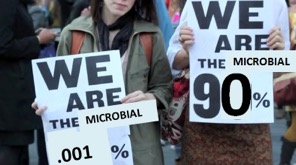 As you can see, once the allometric gears start cranking, they're hard to stop. Let the extrapolations begin! Plotting the data linearly provides a guesstimate for the number of microbes per gram of animal tissue; 1 gram of ground-up human slurry = 1 gram of hydra slurry = 3.4 x 109 microbes. Wow! Based on this number, the total animal-associated prokaryotic abundance in the biosphere comes to 2.1−2.3 x 1025 cells, or about 0.001% of earth’s total inventory of 1030 prokaryotes. A comparison would be the human population of Washington state (7,000,000) relative to that of the world (7.3 billion). Given the animals' roles as consumers in the food web and the generally accepted rule that only 10% of the available chemical energy in food is converted into new biomass, this low percentage is not surprising (Lindeman, 1942; Slobodkin, 1962). What is surprising is that such a tiny minority could be so vitally important to animal well-being and, by extension to the functioning of the biosphere. If these prokaryotes had a political slogan it would be: "Occupy the animals, we are the 0.001%!" Another surprise was the finding domestic animals harbor up to 20% of the global share of animal-associated microbes. I'm sure reducing antibiotic dosing on farms would be a top priority for the animal-associated microbial minority. On the other hand, it's been estimated that human-associated microbes are 10X more abundant than human cells (Hattori, 2009). Thus, an animal-associated microbe can only claim minority status relative to the total number of prokaryotes on the planet.

Finally, Kieft and Simmons looked at the relationship between animal mass and the diversity of the microbes associated with the gastrointestinal tracts of 60 different species of mammals. They used MG-RAST, a database of publically available metagenomes, hypothesizing that larger animals may harbor a greater diversity by providing a larger habitat. They found no relationship between animal body mass and the diversity of animal-associated microbes. However, the final verdict on the value of the scaling exponent is still pending because of the more tedious side of allometry (i.e. the need to generate a dataset with replicate metagenomes and more consistent sequencing coverage). It may be that the fat cats aren't necessarily richer than the laboring ants – human or insect – in terms of microbial diversity. Either way, equal distribution of microbial wealth in terms of abundance per gram of animal tissue is quite astounding. Yet another example of how humans are no different from the other animals on the planet. Now there's something worth pondering! Tracey is a post doc in the lab of Dr. Paul Jensen, Scripps Institution of Oceanography, UCSD.