« Pictures Considered #30 : Of Arms And The Fungus | Main | Of Terms in Biology: Extrusomes »

E. coli Can Be Taught to Make Intracellular Vesicles, But So What?

High on the list of exciting posts on this blog is one about a paper that reported the ex­press­ion of the protein caveolin-1 in E. coli. Surprisingly, this procedure resulted in these bacterial cells filling up with vesicles to the point where there was almost no room for any­thing else. When I give talks based on material from Small Things Considered, this story stands out (maybe in part because my voice tends to quiver when I relate it). Who would have thought that a single foreign protein could have such a novel and striking effect? That a bacterial cell can be induced not just to assemble foreign intracellular ve­si­cles but also to make them in prodigious amounts does indeed challenge the imag­i­na­tion. Just look at this electron micrograph from the original paper. I had never seen any­thing like it...

In the eukaryotic cells from which it came, ca­ve­o­lin-1 participates in the formation of mem­bra­ne structures called caveolae ("small caves") that originate in the cytoplasmic membrane. These surface pits, 50 – 80 nm in diameter, can then be liberated into the cytoplasm as free endocytic ve­sicles. How does caveolin-1 induce caveolae formation? By binding cholesterol, this protein induces curvature in the membrane, which leads to caveolization (my term). For how it does it and how researchers are studying this trick, see here and here.

Caveolae themselves are bustling structures that participate in a large number of cellular events, including the uptake of pathogenic bacteria such as E. coli and Pseudomonas ae­ru­gi­nosa, and viruses such as SV40 and polyoma. They also are involved in many im­por­tant processes, including signal transduction (e.g., acting as mechanosensors to detect flow), lipid metabolism, and the import of diverse compounds. Mutations in caveolins cause "Caveolinopathies" that include muscular dystrophies, heart disease, and cancer, among others. No wonder caveolae are the subject of much research. 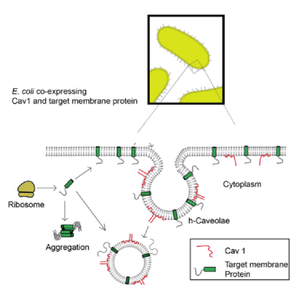 Now, morphing E. coli into a factory producing h-caveolae ('h' being for heterologous) may be an unexpected and intriguing big deal, but you are probably asking, what good is it for us? A pa­per comes to the rescue, pointing out that this finding may have practical biotechnological ap­pli­cations. Here is what the authors say about possible uses: "First, it may be possible to over­express active transmembrane proteins inside cells. Though transmembrane proteins are ge­nerally accumulated as an inclusion body which is inactive protein aggregate, the intracellular membrane structures may provide additional space for transmembrane protein embedding. Second, functional expression of trans­mem­bra­ne proteins inside cells may enlarge the number of selectable enzymes for metabolic en­gi­neer­ing. About one third of all proteins have been estimated to be membrane-bound, which include cytochrome P450 enzymes, but are hardly functionally expressed inside cells li­mi­ting the use of such enzymes for metabolic engineering. Third, the h-caveolae may be the first step toward simulating a eukaryotic membrane trafficking pathway in prokaryotes. Fourth, it is possible that the intracellular membrane structure increases membrane sur­face area, which improves the production of lipophilic bio-products. Because per­tur­ba­tion of plasma membranes by lipophilic molecules is expected to be toxic to cells, the iso­lation of lipophilic molecules in discrete membrane structures may enhance the me­ta­bo­lic activity and viability of the producer cells."

Is E. coli happy carrying such a load of foreign vesicles? Obviously, that situation cannot go on forever. Not surprisingly, the expression of caveolin-1 results in a slower linear in­crea­se in cell mass that eventually stops after about 16 hours. The cells apparently re­main metabolically active for some time longer.

What Good Is All This?

Putting h-caveolae to work, these researchers demonstrated that they can carry a load of foreign proteins. Using an inducible plasmid, they expressed the genes for two trans­mem­brane proteins from neurons in E. coli cells that were also producing h-caveolae. The proteins they chose were Syntaxin 1a and VAMP2 (vesicle-associated membrane protein 2), both of which are SNARE (soluble N-ethylmaleimide-sensitive factor attachment pro­te­in re­cep­tor) proteins that are involved in membrane fusion. They found that both of these proteins were captured from elsewhere in the membrane into the h-caveolae. This extra load of transmembrane proteins did not impair caveolae formation. 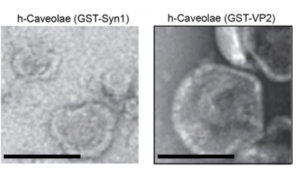 The new proteins carried by the h-caveolae face the outside surface of the vesicles and are func­tio­nal. The researchers demonstrated this by showing that caveolae carrying one of the SNARE proteins fuse with liposomes carrying another SNARE protein. In neurons, these two proteins are known to interact with one other. Thus, the membrane proteins co-expressed with caveolin-1 are operative in the caveolae. The authors also did a similar test by co-expressing caveolin-1 and two bacterial transmembrane proteins, the membrane-bound ATPase FtsH and the ferrous ion transporter FeoB. Here, too, the proteins were incorporated into the caveolae. Moreover, E. coli cells with ca­ve­o­lae were able to endocytose material supplemented in the medium, as shown by the en­try into the cells of carboxyfluorescein, a dye that can penetrate the outer but not the cy­to­plas­mic membrane. This is not surprising, as periplasmic molecules may be caught in the caveolae in-the-making, a finding that had been reported in the original paper on ex­pressing caveolin-1 in E. coli. I suppose that questions arising about the size, charge, and hydrophobicity of the transferable molecules are under study. 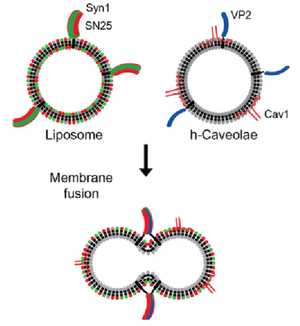 Are the h-caveolae particularly suited for genetic engineering? The authors point out that many en­zymes are active only when they are bound to a membrane. For instance, cytochrome P450 must be anchored to the membrane in order to work in E. coli. Thus, h-caveolae may be useful for producing large amounts of functional, mem­brane-bound enzymes and the likes. In addition, caveolae can also carry a cargo of material in their lumen. This expands the engineering re­per­toire of E. coli to include the making of pro­teins that are notoriously hard to handle. Ca­ve­o­lae are also a favorable starting material for pro­tein purification, being that their membrane con­sists solely of caveolin-1 plus the engineered protein.

For E. coli chauvinists, this is a triumph in that it allows their favorite bacterium to carry out func­tions that were previously reserved for eu­kar­y­ot­ic cells. Included are a greater capacity for making transmembrane proteins and other li­po­philic constituents, as well aspossibly providing models for eukaryotic molecular traf­fick­ing. A new page in E. coli 's versatility!