« Sex And Evolution, Vibrio Style | Main | E. coli Can Be Taught to Make Intracellular Vesicles, But So What? »

Pictures Considered #30 : Of Arms And The Fungus

"I, too, want a harpoon made; one that a thousand yoke of fiends could not part, Perth; something that will stick in a whale like his own fin-bone."
– Ahab in Moby Dick. 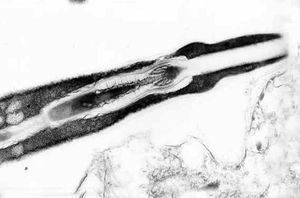 Haptoglossa mirabilis looks like a particularly vicious kind of unicellular predator. For its nefarious deeds it uses a re­markably complex structure that offhand looks like a har­poon, barb-like projections and all. With this device, it injects an entire cell, a spore, into meandering prey such as a rotifer or a nematode. Haptoglossa creates this piece of wicked looking machinery by differentiating into an elaborate cell called a gun cell. The analogy to Captain Ahab's harpoons, though appealing, is superficial be­cause this structure does not fly into space. Rather, it attaches to the prey, then discharges the spore into the prey's interior. There, the spore develops at the expense of the host and the haptoglossal life cycle is initiated anew.

This organism is provisionally a fungus, a member of the oomycetes that include several im­por­tant plant pathogens such as the agent of the Irish potato blight.

We discussed this remarkable organism before, see here.