« By the Numbers: Viral Burst Size | Main | Pictures Considered #30 : Of Arms And The Fungus »

Figure 1. Two ways of thinking about family trees. Both trees represent 3 generations of the Simpson family. In A, we see a Bart-centric tree, showing Bart and all of his direct-line ancestors. In B, we see a common-ancestor oriented tree, showing all the descendants of Jacqueline Bou­vier (including Selma's adopted baby Ling). Source

My wife is an avid genealogist and I'm an evolutionary biologist, so family trees come up for discussion from time to time around the dinner table. Laura always ima­gi­nes family trees as extending upward from a currently living person to include all their ancestors, whereas I al­ways think of them as pointing downward from a com­mon ancestor to all their des­cen­dants (Fig 1). Obviously, I think my way is the right way – just try to figure out what a "second cousin thrice removed" is without considering common ancestry – but in the end they both reflect the fact that we are all the products of a vertical line of des­cent from a series of mothers and fathers. Our most distant direct line ancestors weren't human of course, but even those ancient cho­a­no­fla­gel­late moms and dads 500 million years ago were making babies in a manner that was very similar (at least on a mo­le­cu­lar level) to how we do it today.

When scientists first started piecing together the evolutionary relationships between microbes, they assumed that the same kind of vertical descent happened with those tiny critters as well. The first molecular attempts towards understanding the microbial family tree used ribosomal RNA genes, which happened to fit nicely into the paradigm of vertical descent – the rRNA genes of similar bacteria where more similar to each other than they were to more dissimilar bacteria, just as we would expect if the sequences became more divergent as time passed after two species diverged from a common ancestor. 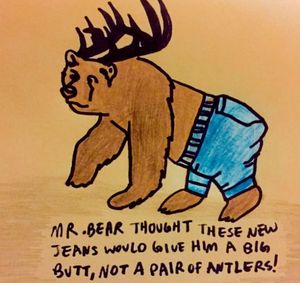 But it turned out that the choice of rRNA as an evo­lu­tio­nary marker was somewhat fortuitous in this regard, because many other genes have family trees very dif­fe­rent from what we would expect based on the rRNA phylogeny. As we looked at more and more genes, it became clear that, in the microbial world, horizontal transmission of genes was happening all the time. This process, almost completely absent in big organisms like us, fundamentally changes how evolution works in mi­crobes. It's really a fundamentally weird idea – just con­si­der what your local forest might look like if ho­ri­zon­tal genetic transfer (HGT) was commonplace in the animal kingdom (Fig. 2)!

There are lots of ways that microbes can pick up foreign DNA. Some microbes can "eat" naked DNA from the environment, and sometimes viruses accidentally carry microbial DNA instead of their own genomes. Perhaps the most well-known vectors of HGT are plasmids, small circular chromosomes that replicate independently of the microbe's primary chromosome(s). We know a lot about these mechanisms of HGT because researchers have harnessed them for genetic engineering and synthetic biology, but we know much less about HGT in the wild, where most of our efforts have focused on plasmids that move antibiotic resistance genes between pathogenic microbes. It's still an open question how often HGT occurs in the wild, and what the most important vectors are for moving genes around.

Probing the mysteries of microbial population genetics with marine vibrios

A decade-long series of experiments led by Martin Polz of the MIT has provided some of the first steps toward understanding HGT in nature. Polz and co-workers isolated several hundred strains of Vibrio bacteria from a single water sample taken from the coastal Atlantic Ocean. These strains were associated with different size particles contained in the water sample, representing either free-living bacterioplankton or else organisms living on pieces of detritus (e.g. algal slime or fish poop) suspended in the water (Fig. 3). In other words, the strains came from very different ecological settings – imagine the difference between free-swimming squid and bottom-dwelling clams. 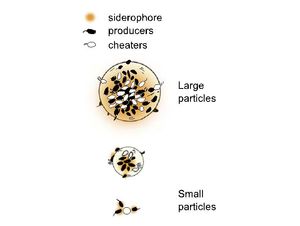 Figure 3. Different size particles have fun­da­men­tal­ly different microbial ecologies. Pro­duc­t­ion of iron-binding siderophores, a leaky public good, was unevenly partitioned between dif­fe­rent size particles in the same water sample. "Chea­ters" were more common on bigger par­tic­les, presumably because they could mooch off of more neighbors than they could if they were on smaller particles. Source

All of Polz's Vibrio isolates were very closely related to each other based on their ribosomal RNA sequences, but careful analysis of other genes revealed that strains from the same ecological setting were more related to each other than they were to strains from different settings (Hunt et al., 2008). Examination of whole genome se­quen­ces of select isolates presented an even clearer picture: although the genomes of all the isolates were very similar, certain mutant versions of genes existed in all free-living isolates but no particle-associated isolates (and vice versa), suggesting that these "ecoSNPs" were adaptive in one but not the other ecological setting. In contrast, many more gene variants were found dis­tri­bu­ted between members of both size fractions. The simplest way to explain this pattern is that HGT was occurring rapidly between these Vibrio strains, but it was more rapid between inhabitants of the same ecological setting (Fig. 4).  In fact, HGT was so common in these organisms that their genomes looked as one would expect from sexually reproducing organisms that undergo chromosomal recombination during meioisis!

A recent paper by Hong Xue, a graduate student in the Polz lab, provides new evidence about how HGT occurs in this community.  Xue and co-authors extracted and sequenced all the small, self-replicating chromosomes (episomes) from the PolzVibrio collection and found many potential vectors of HGT. The majority of episomes appeared to be circular genomes from lysogenic viruses, but plasmids were also abundant. Evidence suggests that these episomes spread even more rapidly by HGT than the genomic mutations discussed previously. When plasmids were sorted into groups based on gene content, the sequences of the plasmids within a given group were > 98% similar. Since DNA accumulates certain kinds of mutations at a steady, clock-like rate, this means that not much time has passed since these plasmids first appeared in the population. It might have only taken a few months, maybe a couple of years, for these plasmids to infect these populations. Interestingly, the virus genomes had much more sequence diversity, suggesting that they only become virulent – and thus spread between cells – infrequently. 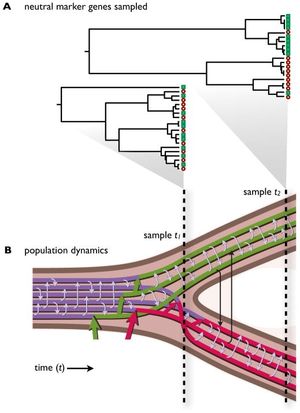 Figure 4. Horizontal gene flow is slower bet­ween than within eco­logically dif­fer­ent po­pu­lations. At some point, an ancestral population (purple) split into two different populations (green and red), for instance by colonizing se­pa­ra­te size particles. As they evolve in separate habitats, they frequently exchange DNA with their own population, but only rarely with the other population. Over time, this leads to clearer and clearer se­pa­ra­tion between gene content in the two po­pu­la­tions. Source

It's pretty obvious how the virus genomes spread bet­ween cells – they occasionally become virulent, killing their hosts and infecting neighboring cells. The story is a little more complex with the plasmids, however.  Only about 1/6 of the plasmids were "con­jugal" – i.e., they contained all the genes necessary to transmit themselves from one cell to another. Another 1/5 of the plasmids had sequences that would make them "mobilizable" as long as they happened to be in the same cell as a con­ju­gal plasmid. However, the majority of the plasmids had no clear mechanism for cell-to-cell transmission. There were no significant differences in within-group sequence divergence between these classes of plasmid, though, meaning that the "non-transmissable" plasmids move around just as fast as the transmissible ones. This means we still don't know exactly how HGT operates in these populations, and there are more big discoveries to be made in the population genomics of natural microbial communities.

What do episomes do for their hosts?

Theoreticians often assume that HGT is more rapid in dense populations because direct contact between cells should happen more often. Thus, one might expect to see more episomes in particle-associated Vibrios than in the free-living groups. But the opposite was true: there were significantly more episomes amongst free-living isolates. Why? Plasmids often carried complete sets of gene for useful metabolic functions such as amino acid metabolism and iron acquisition. These pathways yield products that are potentially available to nearby organisms, opening the possibility that "cheaters" who don't pay the cost to make the products can coexist with producers. Previous work from the Polz lab showed that iron acquisition cheaters did exist amongst these Vibrio isolates, and they were more common in the particle-associated strains. Thus, it might be the case that easily-gained and easily-lost episomes carry conditionally useful leaky pathways – things that might be useful under one ecological setting, but dispensable in another.

An ongoing resource for marine microbiology

Big animals like us are biased toward thinking about the natural world and its dynamics on a big animal scale.  But microbes don't play by our rules, and their rapid evolutionary changes wreak havoc on our desire to squeeze them into classical schemes of taxonomic organization. Modern sequencing technologies are only just now starting to provide the tools necessary to study the population genetics of microbes. The PolzVibrio collection is one of the first attempts to probe a single well-defined microbial community at the depth necessary to figure out what's really going on out there. The number of insights that have come from this collection in the first 10 years of its existence – and the fact that you can actually go back out to the collection site and find the "same" organisms again – suggests that Polz has created a resource that will continue to improve (dare I say revolutionize?) our understanding of microbial evolution and ecology.

Jeff Morris is Assistant Professor at the University of Alabama, Birmingham. His research interests are pretty much coterminous with those of Morrislab. He’s also very interested in the history of the human species, and suspects that if he had it all to do over again he might have chosen to study molecular anthropology instead of microbiology.