A Rickettsia Takes a Walk (or Two) 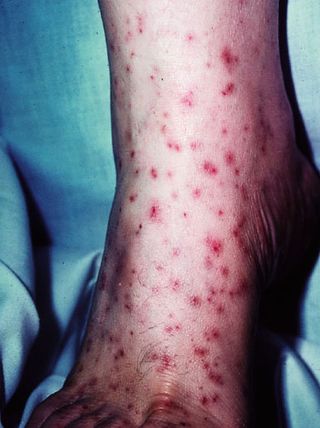 Take a walk through the woods this fall and you might find yourself being feasted upon by all sorts of little beasties, from the macro to the micro. Some of the most common tiny predators are ticks and fleas, found all over the world. Although a nuisance in themselves, these external parasites harbor even smaller microbial invaders, easily passed between humans and woodland creatures alike. Specifically, the members of the bacterial genus Rickettsia are obligate intracellular parasites responsible for a number of diseases, most notably the fever and rash-inducing spotted fever and typhus. Exposure to this type of bacteria can send you to bed with a terrible fever, nausea, body aches, and eventually a nasty looking rash all over your body … and along with that comes a significant rate of mortality too.

Ricksettia have no natural motility of their own. How then, are these mini invaders capable of spreading from the miniscule point of a flea or tick bite to the rest of the body wherein they cause such distress? Besides being swept along the blood stream, the answer lies within the host’s own cells, specifically involving the structural protein actin. Working as a dynamic skeleton within eukaryotic cells, actin polymerizes into long, strong filaments that can assemble and disassemble dynamically to remodel the cytoskeleton of the cell. This structural activity supports motility, phagocytosis, and organelle movement (check out this video of a cell "eating" yeast). It is especially important for muscle contraction, where long filaments of actin slide alongside themselves (with the aid of other proteins) to expand or contract in response to nerve impulses that signal muscle movement.

The dynamic polymerization and depolymerization of actin can also be a useful way for otherwise non-motile intracellular bacterial pathogens to exploit their host cell's resources to propel them for cell-cell spread. There is a handful of bacteria that utilize this process, including Listeria, which you can read all about in this STC article. However, recent discoveries set the spotted fever group rickettsiae apart from the rest: while the majority of the parasites utilizing host actin-based motility are thought to involve only one actin polymerizing protein, the Spotted Fever rickettsiae, R. parkeri in particular, uses two. 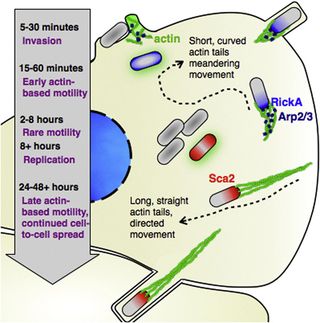 In Rickettsia infection, the bacterium multiplies within the first suitable cell it encounters, then it jettisons out of that cell and spreads into neighboring cells. So what's the big deal about two brands of motility? Both promote the transfer of the rickettsiae between adjacent host cells. It appears that R. parkeri uses each of these two proteins separately and the actin tails formed by each protein have distinctive structures. However, to follow how this works, I need to get into some details of actin-ology.

Early motility is controlled by the RickA protein, which activates the Arp2/3 complex that regulates the actin cytoskeleton: it promotes actin nucleation and polymerization at the f-actin's fast-growing, plus-end. The action of RickA causes slow and curved polymerization of actin resulting in curved bundles of the molecule. Consequently, the rickettsiae travel in bends that would do justice to a ballerina. Later in the infection, another protein, Sca2, takes over by mimicking the action of host formins, another class of proteins associated with the fast-growing end of actin filaments, that promote their nucleation. Compared to RickA, Sca2 causes actin to polymerize faster, and yields straighter actin. The rickettsiae now move along straight paths, à la Mario Andretti on a straightaway.

So why does this rickettsial species have two separate kinds of host-actin based motility when other pathogens seem to only require one? Although the answer is still unclear – and a new mouse model for R. parkeri will hopefully allow further study of the phenomenon – the authors go on to speculate that this two-protein system is somehow advantageous for the bacteria, allowing them to spread between diverse cell types without infecting one cell to the point of lysis. 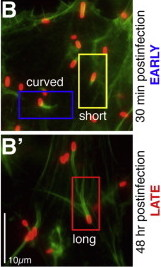 How then does this system compare to other actin-hijacking pathogens? Interestingly, the related typhus-group species Ricksettia typhi lacks RickA and solely uses Sca2 (albeit one divergent from that found in R. parkeri) in actin polymerization, while Listeria monocytogenes recruits the Arp2/3 complex to escape autophagy by the host cell. Therefore, it is possible that temporal recruitment of the Arp2/3 complex via RickA by R. parkeri may temper autophagy in order to allow for sustained infection within the host cell, while also allowing for rapid cell-to-cell spread via the faster-polymerizing Sca2 complex.

Whatever the raison d’être for its tag-team of actin polymerization factors, this Ricksettia parasite is a wonderfully chilling example of how an immotile bacterium can hijack a cell's cytomotive machinery in order to invade and colonize an entire higher-level organism … but don’t let that keep you out of the woods. 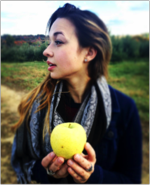 Monika Buczek is a Ph.D. candidate working in the Janakiraman lab at the City University of New York.