A Snippet: Who Invented Agriculture, the Ants or the Bees?

Agriculture was invented at the time of the dinosaurs, long before there was anything resembling a primate on earth. Take the example of the leaf-cutting ants. For about 50 million years, they have been harvesting plant material, bringing it to their nest, chewing it up, and using the chewate to grow fungi, which is what they eat. Fittingly, their growth plots are referred to as "fungus gardens". Termites do similar things, except that their fungi are not eaten directly but are used to break down woody plant material. This makes them early-day biotechnologists, pioneers in the use of hydrolytic enzymes. The list of animal farmers is even longer and includes a number of other animals and sophisticated techniques. A notable one is that of marine snails that graze on fungi growing on the wounds that the snails themselves make on the leaves of marsh grass. 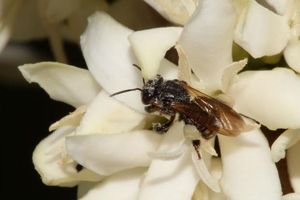 It turns out that bees now join the list of the farming insects ‒ ants, termites, and beetles. Certain Brazilian bees also grow fungi, albeit for a specialized non-food purpose, to safeguard the food supply of their larvae. This is a new theme, preserving food by symbiosis. Lucky for the researchers, these South American Scaptotrigona social bees are stingless. They are so tame that in Brazil they are used as honey-producing pets, even in apartments of high rise buildings. A team of investigators from several Brazilian institutions has been studying the behavior of these bees discovered that their relationship to fungi is obligatory. No fungi, no bees.

Bees make cells out of cerumen (what we would call wax but is actually a mixture of wax and plant resins) for rearing their larvae, the so-called brood cells. Before depositing the eggs, the bees place within them a mass of semi-liquid food that is regurgitated by the workers and which serves as food for the larvae hatched from the eggs. The bees then cover the cells with a cerumen layer that is opened only when the adult bees emerge. What caught the investigators' eye is fungal growth in the brood cells. This starts about 3 days after the eggs are laid and ceases a few more days later. The fungus is an ascomycete mold of the genus Monascus that is used in East Asia for making various foods, mainly red rice and which makes a large number of bioactive compounds. 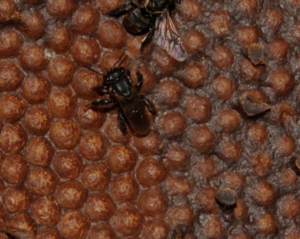 Figure 2. Brood cells containing young larvae are covered with a coating of cerumen (brood cells at right). When the larvae spin the cocoon, the cerumen coating is removed by workers (brood cells at left) and reused to build new brood cells. Source

Suspecting that the fungus is eaten by the larvae, the researchers filmed the larvae in action. They saw them making circular swaths and chomping away at the fungal growth. But, they asked, is this kind of behavior obligatory? Larval food harvested form the brood cells was sterilized with UV light and reinoculated with the fungus. When the larvae were fed it, 76% survived, whereas only 8% made it on the uninoculated food. Moreover, the uninoculated food got spoiled, the fungus-bearing one did not. Where does the fungus come from? It only forms mycelium and no spores (conidia) are ever seen, which suggests that the fungus is propagated by the bees. Trying to grow it from various parts of the bees and their nests, it was only found in the material used to make brood cells and the rest of the nest structures. However, mycelium could only be coaxed to grow out of such material when provided with the larval food. The cerumen is reused to make new brood cells, which leads ot the spread of the fungus to new structures. The investigators further surmise that the fungus resides in the bees' intestine and is spread from one to another by mouth-to-mouth feeding. This is not the way fungi are transmitted between ants, termites, and beetles. These use specialized structures found only in reproductive adults to carry the fungal material, whereas here it is the workers that do the transmission. This sort of horizontal transmission is news. 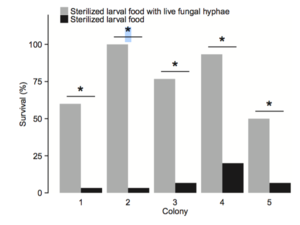 But what are the fungi for, given that these bees provide their larvae with what is likely sufficient food? There is no evidence as yet that the fungi are eaten for nutritional purposes, although it cannot be ruled out that the fungi provide some special nutrient needed for the development of the larvae. However, the experiment with re-inoculated food showed a huge difference between inoculated and control, beyond what one would expect form a purely nutritional effect. So, the reason why the larvae eat the fungus remains open. The alternative role for the fungi is to safeguard the larval food. It seems plausible because without the fungus the larval food rots away rapidly and smells bad in no time. Sure enough, the fungus produces compounds active against Staphylococcus aureus and E. coli, but only when fresh. Old fungus-containing larval food loses its antibacterial activity. The identity of these compounds is not yet know but the leaf-cutting ants and a wasp are known to make antibiotics (or more precisely: their symbionts make them).

This work suggests that fungal activity is important in preserving the food for the larvae or perhaps to protect them from harmful parasites. Careful now with using fungicides compounds near or in bee colonies This may mess around with an essential symbiosis.